Olga by schwa is a Virtual Instrument Audio Plugin for macOS and Windows. It functions as a VST Plugin, an Audio Units Plugin, a VST 3 Plugin, an RTAS Plugin and an AAX Plugin. 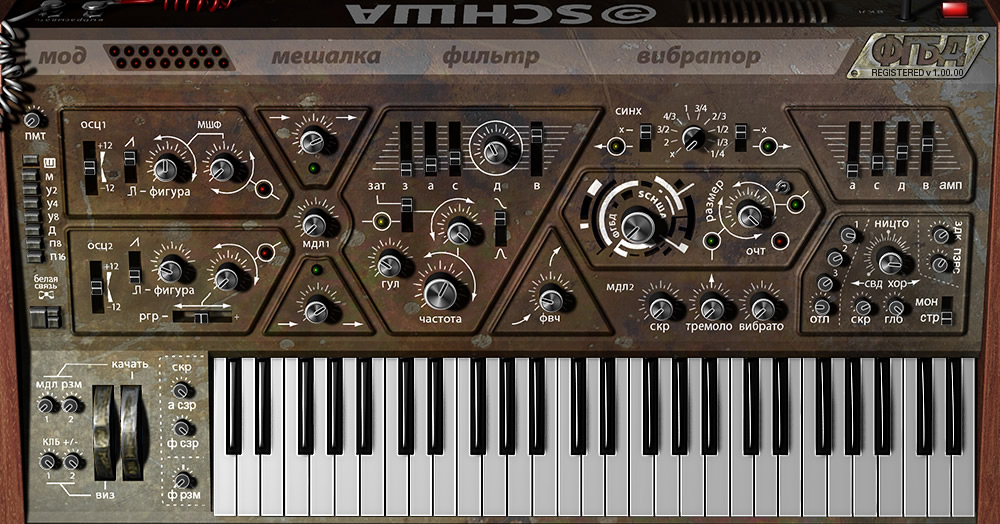 Olga is a virtual analog synthesizer designed from first principles to be distinctive.

"Imagine a handmade experiment from an unlikely place, a synthesizer so full of life and character that it earns the right to be called a musical instrument. Olga encourages risk, experimentation, and exploration, and rewards you with unexpected and exciting sounds, vibrant and human. This is the dusty gem you could spend your life searching for."

Gaussian Reactive Oscillator Overdrive Virtual Engine: Throughout Olga's signal path, levels can be pushed through saturation and into full overdrive, with a thickness that develops organically, breathing life and character into your music.

This synth so far is something like a well kept secret. Not many users so far. This is a good point for me. I like to use a synth that not everyone has !!
It is not a feature monster like other synths but the selection of features is very good.

The GUI looks really cool, very unique like the rest of Olga is. The first impression will be "why is the text in russian ??". There is a switch to see the controls in english. To find that there is a riddle at the first pages of the manual. The GUI is very clear, no hidden functions or dropdown menus.
Speaking about the manual it's completely in english and very good. It explains all the features and after reading it you may not even need the english translation of the controls any more.

Compared to other synths Olga has quite basic features but i would say all you really need for programming analog style sounds.

It has two OSCs which can be switched between a saw and a square waveform. With the shape control knob you can fade from the saw to a triangle or from a thin pulse to a square. On OSC1 you can do PWM (by LFO1) and on OSC2 Fine tune modulation (by LFO1). LFO1 is fixed to a triangular waveform, only a rate knob is present between the OSC mixer knobs. Of course the OSCs can be detunded. I havent found a dedicated osc sync so far.

Olga has a maximum of 16 voices. Voice modes are Noise, Mono, Unison2, Unison4, Unison8, Duo, Poly8 and Poly16. With Unison8 you can do nice trance leads.

There are two filters where Filter 2 is a HP with only a knob for Cutoff, like at the Jupiter 8.
Filter 1 has an enevelope with ADSR and hold. Filter types are a Lowpass (ladder filter) and two different bandpass modes. There's a slider to mix the cutoff modulation amount of the envelope and LFO1.
Two knobs for Cutoff and resnace are present. Take care of your eras when turning up the resonance !!

For more modulation there are LFO2 and a trigger LFO. LFO 2 uses a triangular wave with controls for Rate, Tremolo and Vibrato. The trigger LFO can do some "gate"-type effect.

The Amp section consists of a ADSR envelope, the output knob and a Drive knob. The drive is somehow like an analog tube which fattens up the sound a lot. It also inreases the instability and rawness of the sound. A switch for distortion feedback is also present.

The effects section is limited to a phaser and a chorus but for me that's enough. General controls are a knob for the Dry/wet level which is the effects level for the phaser or chorus. Other general controls are rate, depth and a mono/stereo switch. The phaser has three stages with a volume knob for every stage and a feedback control knob. The chorus effects is awesome, the phaser is nice too.

The modulation wheel and the pitch band can be programmed. The mod wheel can be used for the amount of modulation of LFO1 and LFO2. MIDI CC numbers for all controls are listed in the manual.

The sound is the point you will want to buy this synth. It's hard to describe, let's say it's unique, analogue and FAT. I instantly liked the sound of Olga and that doesn't happen very often. It's definatly an fat analog sound and not so easy to make "smooth" patches with this one. It always wants to sound fat so some carefull adjusments of the highpass filter are sometimes necessary.

The amount of the presets is not very high but the quality is very good. This synth is very new so don't expect a huge number of soundbanks at this moment.

The support is simply excellent, both at the developers homepage and at KVR. Yesterday i reported a problem to schwa (the developer) and today he sent me a corrected test version which works perfect. Could support be any better ??

Price
The 80$ for the commercial version are not too much. Nice value for the money.

So far I just love the Olga synth, that's it.

So far the remaining problems are fixed with the new version 1.01.00 !!Read more