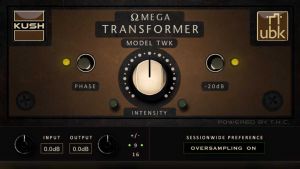 Omega TWK by Kush Audio is a Virtual Effect Audio Plugin for macOS and Windows. It functions as a VST Plugin, an Audio Units Plugin and an AAX Plugin.
Product
Version
1.0.1
Product
Version
1.0.3
Tags
Tags:LimiterKush AudioOmega TWK
Effect
Formats
My KVR - Groups, Versions, & More
16 KVR members have added Omega TWK to 5 My KVR groups 18 times.
Not In Your MY KVR Groups
(or group limitation prevents versioning)
10 +2 I Own This
5 +1 Favorites
1 +1 I Want This
+2 in private groups

A lovely saturation and distortion generator pulled straight from the heart of Kush's own Tweaker hardware compressor.

Model TWK's dirt is the result of modeling the way Tweaker overdrives a long chain of 70's op­-amps, all of which have specs that, by modern standards, might be considered abysmal. But that dirty, slow sound is exactly what makes the Tweaker such a warm, charming friend to all kinds of sounds. At the heart of Tweaker's op­amp chain is another friend of distortion lovers, the 'supermatched transistor', itself a primitive and imperfect attempt to perfectly balance the push and pull of a primitive VCA.

The effect of lightly grinding each of those clipping stages before passing it along to the next is a smooth, thick, and slightly dark saturation. Because of that, Model TWK (like the Tweaker itself) goes from 'mellow & sweet' to 'angry & abrasive' a bit faster than other Omega Transformers, with their more forgiving tubes­-and-iron circuitry.

A current favorite application is the one place you might not think to use a dedicated plugin saturator: the mix buss. Put Model TWK on the 2-­mix and turn the Intensity until you barely, and rarely, see any green LED's flickering. The result is some of the smoothest, most 70's tape-­like saturation you've ever heard from a plugin.

I own both TWK & 485A and I like to use them on individual tracks. They give great saturation and raise the clarity in most of cases due to some pleasant distortion add, "rounding" the signals and giving them some more feel of volume.

However, dont overuse it on mix Bus as it can smooth the atacks of your Low frequencies.

I ve noticed that they have slightly different frequency curves with Oversampling on/off, try both modes to select the one matching better for your needs.