Precision EQ by KeyToSound (Koblo) is a Virtual Effect Audio Plugin. It functions as a VST Plugin, an Audio Units Plugin and an RTAS Plugin. 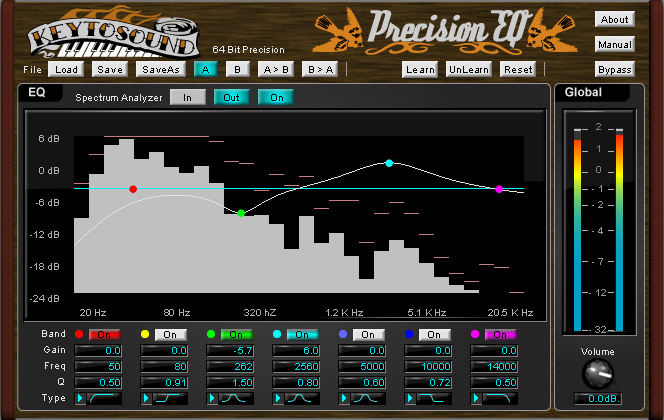 The Precision EQ offers precise equalization. Featuring an FFT representation of either the input or output signal, you can see your equalization results, even if your ears deceive you.

Like Vintage EQ, Precision EQ offers 7 bands, with 7 filter-types, each switchable with Gain, frequency and Q-width available. The EQ graph is draggable with a spectrum analyzer, so this EQ pleases those who like to use their ears, enter digits, drag nodes or use their eyes to zero in on problem frequencies. Again, KeyToSound seem to be shooting for an all-pleasing EQ here.

The sound is very clean and transparent. I found I could bring out things like the tines on electric piano passages without disturbing the track or rendering it coarse and edgey. Likewise with a mix, and there is plenty of flexibility to do things like the cut & boost trick, while maintaining a clean signal.

And the wonderful KeyToSound low-CPU is in effect here again! Not only do you have a clean, master-ready EQ here, you have an EQ that uses such little CPU that you can use it as a track EQ, on however many tracks you like! I know I do. :D

Again, no presets, but there is a preset system, and knowing KeyToSound, I'll bet some preset-sharing will turn up online at some point; the possibility is there, and internal file-systems are always a bonus with plug-ins, giving you that second layer of preset-security.

And all this for $59? It's a no-brainer. Clean, efficient and with some of the best support in the business, you won't regret picking this up. With the drive to model analog gear often pushing up the processing demands of software EQ's, it's refreshing to find rare treasures like these that combine maximum sound with maximum performance, stability and price. Way to go, KeyToSound! A convert is born.Read more

NOTE: I've also reviewed KeyToSound's Vintage EQ. Several of the points of that review (ie. the GUI, support) also apply to the Precision EQ so I've duplicated the odd paragraph.

I demoed both the Vintage EQ and Precision EQ for a few days without restriction thanks to KeyToSound's non-restriction demo policy, and let me say that policy reeled me in -- by the time I'd finished they were all over my work in progress and I had no choice but to buy (not that I'm complaining)!

The Precision EQ costs $59 which is superb value for money. It differs from KeyToSound's Vintage EQ because its filters have steeper curves and it doesn't colour the sound. So it's for use mainly for precise, "surgical" EQ changes and cleaning up problem sounds without changing the tonal properties of the sound.

If you need analog style, colouring EQ, KeyToSound have the Vintage EQ available.

The CPU use is fantastic! I don't know how the KeyToSound people have done it, apparently there's some clever techie reasons for it, but this EQ can be used without much of a care for CPU.

The GUI, I feel, tends to be a love it or hate it affair. I admit looking at the screenshots before I used it I didn't like it, though now I've found it's grown on me. It's easy on the eyes which is great for long sessions.

I must also mention the nice little touches that make the EQ great to use, like draggable nodes and an inbuilt Spectrum Analyser. This is useful for immediately seeing problem spots in the audio, though I also find it nice to turn off the analyser every now and then -- this EQ I find rewards playing it by ear a lot. There's also MIDI learn, a further nice touch.

As for support, I haven't got a bad word to say about KeyToSound. Botkiller is one of their main support guys and he's very active on KVR (and not just on the KeyToSound forum), and he always is responsive and friendly towards and comments or suggestions. Top marks. The other KeyToSound guys are also present on the forums and they all seem very approachable.

There's an inbuilt preset saver/loader too, I don't use it but it might be useful to some. I've rated both presets and documentation 10 but I've never had to use either (which to me is a good sign, especially with the documentation as it means the EQ is easy to use without having to read up on it).

Stability -- it's never crashed Ableton or Reaper and I'm using Windows Vista. "Rock solid" is the phrase that comes to mind.

In conclusion, it's a precise transparent EQ which uses little CPU and is far cheaper than it should be. If you need such a thing in your arsenal (and who doesn't), you'd be a fool not to demo this. Happy EQing!Read more