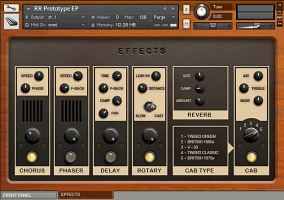 Prototype EP by Rhythmic Robot is Soundware (samples or presets that load into other products) for macOS and Windows.
Product
Version
1.0
System Requirements
Full version of Native Instruments KONTAKT v4.2.3 or later.
Product
Version
1.0
Product
Version
1.0
Tags
Tags:Electric PianoClassic Electric PianoClaviClavinetElectric Grand PianoEPHohner Pianet TKontakt InstrumentPianetPiano / KeysPrototype EPRhodesRhodes Mk1Rhythmic RobotTacked Electric PianoTacked RhodesWurlitzerWurlitzer 200a
Soundware
For
Native Instruments Kontakt 7
Soundware
Formats
NKI
Important Note
Requires a FULL version of Native Instruments Kontakt version 4.2.3 or higher (all versions of Kontakt 5 supported). Kontakt Player is NOT recommended and will time out after 15 mins or so. PLEASE MAKE SURE YOU HAVE A FULL VERSION OF KONTAKT BEFORE BUYING, AS WE CAN'T GIVE REFUNDS FOR SOFTWARE BOUGHT IN ERROR!
Prototype Ep Demo 1
My KVR - Groups, Versions, & More
2 KVR members have added Prototype EP to 2 My KVR groups 2 times.
Not In Your MY KVR Groups
(or group limitation prevents versioning)
1 0 I Want This
+1 in private groups

Prototype EP is a meticulous recreation of an unusual, East German Claviset-type electric piano. Its uneven, slightly clunky sound is perfect for roots rock, blues and honky-tonk folk styles, or for layering with a more conventional EP instrument to add quirkiness and organic irregularity to the tone. It has multiple round-robins, velocity layers and note-off samples to create a very authentic vibe where no two notes sound quite the same.

The Claviset was developed by Weltmeister in the early 1960s. It was very similar to the Selmer Pianotron and both instruments shared a quirky electromechanical design in which metal tines were plucked with little rubber plectra, and their sounds then captured by electromagnetic pickups. But while the source instrument for Prototype EP conforms to the basic Claviset framework, it incorporates an output stage, tone control, built-in amplified speakers and single Tone knob, none of which were Claviset staples; and there is no Weltmeister name on the chassis. The intriguing possibility is that this was an early prototype unit... hence the name.

Prototype EP sounds like the electric equivalent of one of those bare-bones honkytonk pianos you might have found gracing the parlour of a frontier whorehouse back in the nineteenth century: erratic, raucous, badly-behaved, temperamental. The tuning is far from perfect (or stable); note-to-note buzzes, squeaks and rattles are all present and [in]correct; the clicks, ticks, scrapes and thunks that accompany the plectra dropping back into position have all been meticulously reproduced; and the result is definitely not polite any more. In short, don't try to play a DX7 power ballad on this thing... but if you want to rock a bit of the Stones' Brown Sugar you won't go far wrong.

We've included some simple but powerful controls that allow you to create quite different moods with the base machine: Tilt EQ alters the balance of the tone from bass-heavy to tinkly and bright; Tube dials in some saturation for a nicely overdriven snarl; Sustain blends in a synthesised sustain tail that extends the notes rather nicely (and can be detuned if you wish, for a thicker sound). There's also the vital Tremolo control, and Response simply allows the instrument to respond to velocity with louder and brighter tones, or – if you switch it off – keeps true to the original Claviset-style delivery. The various velocity layers that Response accesses were created by multisampling the hardware board at different settings of its onboard Tone control, so there's a very organic transition from warm and mellow to bright and metallic; the various layers and round-robins we've employed also help the whole thing to breathe and behave in a suitably unpredictable way.

Round the back you've got some useful Effects, of which we warmly recommend a touch of reverb and chorus and have been happily surprised by how good the thing sounds through the rotary speaker, too.

If all you're looking for from an electric piano is smooth Autotuned ballads, you probably don't need this. But if your tastes drift into rock, roots, blues, bluegrass, folk, even reggae or early Motown-style soul, Prototype EP could be the secret weapon you need to give your keyboard parts a bit of grimy, authentic mojo.