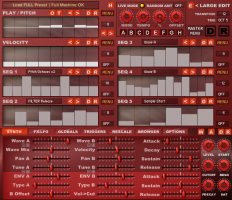 120 Multi-Sampled Instruments designed with the PolyKB II and Dune 2 Synthesizers. This provides a good mix of analog warmth vs digitally smooth which blend together very well for Pads, and also makes a nice sample set for Kosmology. With Multiverse you can randomize the Instruments easily using the 'W' button to quickly get new Wave combinations, or use the global randomize to generate new instruments very quickly:

Multiverse is a script for Kontakt 5 which emulates a dual oscillator synth design using the included sample collection as the sound source. The idea is that it is a fun and easy way to come up with unique sounds on the fly with lots of randomise functions, the Waveform randomise being the most useful for quickly trying out pairs of waveforms. Multiverse is a direct replacement for the Kosmos Script bringing it more inline with the Kosmology Script. The improvements include:

Kosmology is an Advanced Sequencing System designed with Live performance in mind. It has 8 Sequencer Instances which can be switched on the fly from your MIDI controller. Each Instance has independent control over 40+ parameters with 5 freely assignable destinations from a list of over 40. Each Sequencer also has independent tempo and step size which opens up almost endless possibilities. The Sequencers can be played like a regular instrument and are also polyphonic. The greatest feature however is the ability to Sequence the Waves (sampled instruments) themselves which brings a unique and instantly inspiring 'sound' to the sequence. There are also a series of live MIDI note triggers designed for manipulating the tempo and sound during performance, a Globals section designed for offsetting parameters across all instances which support VST Automation. There are also 3 programmable triggers which can apply offsets to parameters when the relevant MIDI note is held, and finally there is a Rescaler for forcing sequences to a specific scale for each note in the octave.