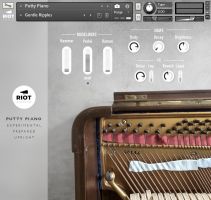 Putty Piano is a prepared piano instrument for Kontakt sampled from an upright piano dampened with poster putty – in the UK often simply referred to as "Blutack". The sample library was created as a fresh take on a timeless classic and is targeted at score composers and producers who are looking for a different sonic approach to a universally-loved instrument.

Putty Piano runs in Kontakt 5.8 and above (full version only) and is now available at riotaudio.com for a special introductory price of £59 (offer valid until 10th July 2019).

Putty Piano is based on 0.95 GB of meticulously sampled recordings of a 1950s British upright piano (Bentley) dampened with a strip of poster putty (Blutack). The library contains three round robins and three dynamic layers (p, mf, f) for each note which are dynamically cross-faded using Kontakt's AET Filter Technology. The piano was recorded at close range using a spaced pair stereo microphone technique.

Putty Piano has two layers of mechanical noise from the piano: the sound of the hammers falling back onto the felt after release, as well as the sound of the sustain pedal being depressed and released. The library also contains a layer of human noise – player-generated rustles, swooshes and breaths as well as the sound of pages turning. This layer is added to allow the user to add realism to their sound by simulating a real pianist in a recording session.

In addition, Putty Piano comes with a special "Body" layer, a blend between a sine wave and a recording of Ebow-generated notes from the same piano. This "Body" layer is designed to allow the user to add longer sustain and more resonance in the mid/low-mid frequency range to the basic dampened sound which by itself is more dry and percussive.

Putty Piano is a simple one-page instrument with a clean, easy to grasp user interface. It allows for control of the following parameters: