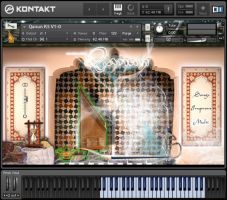 Qanun by Sonokinetic BV is Soundware (samples or presets that load into other products) for macOS and Windows.
Product
Version
1.0
Product
Version
1.0
Tags
Tags:QanunSonokinetic BV
Soundware
Formats
Kontakt 4 Kontakt 5
My KVR - Groups, Versions, & More
5 KVR members have added Qanun to 3 My KVR groups 5 times.
Not In Your MY KVR Groups
(or group limitation prevents versioning)
3 0 I Own This
1 0 I Want This
+1 in private groups

Sonokinetic BV is proud to announce this library of a multisampled and performance sampled Qanun. This instrument complements our other Arabic instruments such as Ney and Kemence to build an ethnic ensemble. The Qanun has been played for centuries and feels right at home in our collection of deep sampled ethnic instruments and vocals.

The Qanun (also known as Qanoun and Kanun) is a dulcimer or zither-like instrument of 81 strings stretched over a frame and plucked with the fingers or picks. Its distinctive tone comes from the grouping of strings and levers which create the scales.

Our Qanun was recorded in Istanbul by our long-standing friend, expert engineer and composer Ceyda Pirali in high fidelity audio quality. The player is the renowned performer Gunay Celik who learnt his craft at the State Turkish Music Conservatory. He studied the playing styles and techniques for many years before becoming a master in 1992. He taught Qanun at university level and has played with the İstanbul University Ensemble and Ayangil Turkish Music Orchestra. His credits also include many performances with Turkish radio and television. Currently, Gunay is working at the State of Turkish Classical Music Ensemble. He has kindly agreed to allow us to capture his unique playing style with traditional songs and hundreds of improvisations.

For the multisampled playable instrument we have captured multiple round robins and velocity layers so that you can play the instrument chromatically. For the improvisations and songs, Sonokinetic Qanun features tempo-synced performances in root keys. These samples are wrapped in an intuitive interface which makes playing this instrument a pleasure. In addition, the convolution reverb creates an unparalleled ambience, evoking the spirit of Arabia.

Sonokinetic has established a name as one of the best value & quality sample producers and with this product we'd like to underline that statement. We stick with our unbeatable pricing module and high quality sampling.