Redline Reverb by 112dB is a Virtual Effect Audio Plugin. It functions as a VST Plugin, an Audio Units Plugin, an RTAS Plugin and an AAX Plugin. 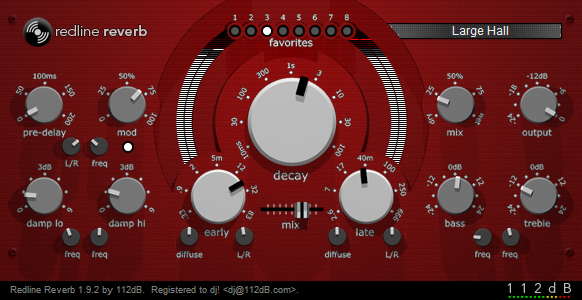 Redline Reverb is a musical reverb based on a completely new and original concept that excels in both warmth and transparency at extremely low CPU usage, according to 112dB. Its core algorithm is based on the Rev-6 and Space Master Reaktor ensembles by Martijn Zwartjes. With its many sound enhancements, an intuitive and attractive new user interface, and much optimized CPU usage, Redline Reverb represents the next generation of these celebrated algorithms.

Redline Reverb is a fully algorithmic and true stereo reverb with possibilities far beyond the conventional - check out the 112 factory presets for a comprehensive showcase of what it can do. Unlike conventional algorithmic reverbs, Redline Reverb does not need separate plate, hall, and room algorithms. Instead it features a comprehensive yet intuitive parameter set that allows you to easily recreate any given reverb characteristic, leaving you free to create lush smooth vocal reverbs, convincing room simulations, almost infinite reverb tails, synth pad and delay effects, and everything in between.

112dB say that you will find that its separate early/late reverb sections and modulation options make it an excellent choice for expensive hardware-style reverbs, while its extensive tweakability renders it equally suited for more experimental reverb and delay effects.

Probably the best quality reverb plugin that one can buy for under $150. You can find it on sale for somewhere around 100-125 occasionally. It's lush, warm, musical and works on basically everything. Incredibly light on the CPU, almost shockingly so for such a high quality reverb. I'm not sure exactly whats going on underneath the hood, but it adds something extra that you don't often find with many reverb plugins. There are so many decent sounding, but in my opinion, very sterile sounding reverbs out there. Not this one, it just sounds great. It can do small spaces when just a little reverb is needed to glue a drum kit together, to absolutely colossal spacey ambiences. The controls offer everything you need to sculpt the right space and nothing extraneous that might hamper your workflow. Lots of reverbs have come out in recent years, and honestly, I haven't been the slightest bit interested in them, Redline just covers all the bases. Also, the installation is refreshingly straightforward and easy, no obnoxious download managers or ilok, and most importantly, 112dB support is great. I believe they still offer a lengthy demo period with full functionality, so it's worth just downloading and seeing how you can incorporate it into your workflow.

I wonder why this beast doesn't have any reviews?!?!

Cool. Initial skin is not that pretty, but it has second one which is killer. Behaviour of “length” button could be wierd at first, seems to me it has a bit longer tail than other reverbs with same value on. Also Gain button could use more of positive values, but now I’m just neatpicking....
Love that little hints and direct value input.
Layout is well touhght. Not much to “not understand” or something.

It’s typical algorythmical reverb, so you got early reflection and diffusion stage. Both nicely controlable. Nothing wierd here, which is cool.
It has a little downside. Lack of input filters. 112db promisted them, but they had really sad personal issues, so …. But you can use output shelves or just add your DAW’s filter before reverb. Same thing with wideness control. Really minor glitches.

Here we go. MASSIVE sound. I’ve been demoing it A/B against AAR and space this adds is amazin! :) When “copying” presets from AAR you can even get to that lushness. But huge bright spaces are where this reverb really shines!
Only thing to watch out is early reflection engine. It’s cool, but you need to watch out difusion. When set too low or too high, it generates a little delay.
But other than that, sound is amazing. I use it all the time. It really adds to sound of instrument a lot. Lot’s of people were comparing it even with mighty Lexicons. :)

It really opens you a whole space in a mix. If that's not what reverb should do, then I don't know what. :)