RockAmp by Linda Audio is a Virtual Effect Audio Plugin. It functions as a VST Plugin and a VST 3 Plugin. 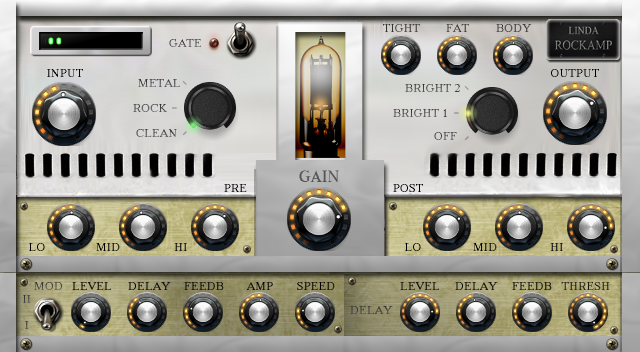 No specific hardware simulated, no advanced circuit emulation algorithms used - just tuned to sound good. It is useful for rock and for low to mid-gain sounds, but it is also capable of some high-gain tones.

Features 3 drive modes - CLEAN, ROCK and METAL which differs in gain amount but also in distortion character and pre-equalization used.

BRIGHT switch engages algorithm which accentuates higher frequencies dynamically. It is very sensitive to the input signal level (this can be adjusted by INPUT).

PRE Equalizer not only shapes input signal frequencies but in ROCK and METAL drive modes also significantly affects the drive level and character.

TIGHT affects how fast is the drive response to signal (the more tight - the faster drive amount falls).

FAT adds even harmonics to the signal.

BODY adds some middle and higher mid-range and some more aggression.

MOD is modulation effect which can be set up like chorus, flanger or vibrato. In mode I there is one delay line, in mode II there are two delay lines creating richer chorus effect.

DELAY is simple delay effect with overdrive and filter in feedback loop - it can be introduced by THRESH amount.

This is only Amp simulator, it does not feature Cabinet simulator. For cabinet simulation you can use some free Impulse response VST plugin like Ignite Amps NadIR.

This is a very nice sounding guitar amp simulation.

Very good quality - not only - for a free plug-in. I know some commercial amp-sim plugins, which sound much less convincing.

The clean as well as the overdriven sounds are very convincing, without the often heard too sharp, too shrill or too digital sounding higher frequencies, the - compared to a lot of real amps - even luxurious pre- and post-tone shaping controls allow a good (fine-)adjustment. Just sounds right. The overtone reproduction and dynamic reaction also is very good, the general tone is very naturally sounding, doesn't over-colorize the original signal, plays and reacts very much like a good real tube amp.

The general sonic character for me is some very good, in a positively sense more vintage based tube amp tone, but - if wished - with much more gain, even decent high gain, so, depending on the tone controls you easily can adjust some nice, more American as well as more British sounding tones.

The modulation and delay section work fine, although I personally mostly prefer a pure amp tone, but nice to have these options already built in.

Congratulations to the developer and thank you.