Rogers Big R Dub Kit - All Samples Pack by Drumdrops is Soundware (e.g. samples or presets that load into other products). 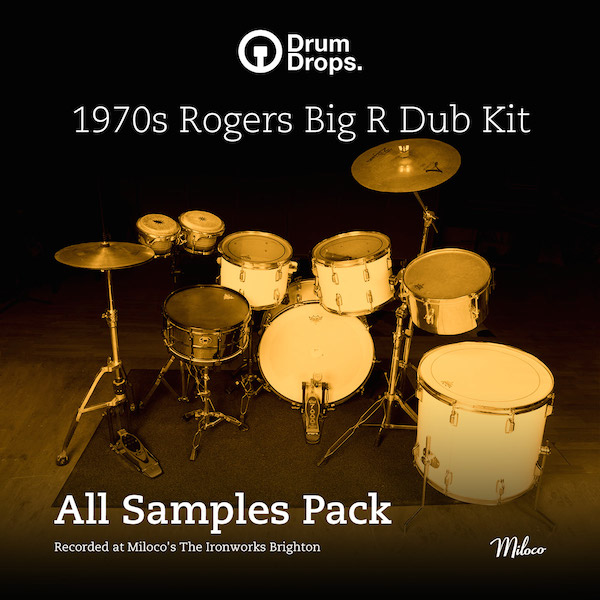 The Rogers Big R Dub Kit - All Samples Pack includes our Multi-Velocity Pack, Singles Hits Pack, Drum Replacement Pack and samples from the Kontakt 5 Pack. We include 12 different software patches and three different packs of WAV samples. This is great for anyone who wants complete versatility.

The Rogers Big R Dub Kit is the ultimate sounding dub kit. This kit has been used to record Drumdrops in Dub Volume 3 and Drumdrops in Ska as well as many commercial releases. The kit comprises a 24" x 14" Bass Drum, a Ludwig Black Magic 14" x 6.5" Snare Drum, a Ludwig Acrolite 14" x 5" Snare Drum, a huge 18" x 16" Floor Tom, and two Rack Toms, a 14" x 10" and a 13" x 8". The cymbals used were 15" Zildjian A Sweet Hi-Hats and a 17" A Custom Crash. Percussion for this kit includes a 14" Timbale drum and a set of Bongos. Also included is some Electronic Percussion using a Boss PC-2 Percussion Synthesizer and a Tama Techstar TS-204.

As a bonus we also Include a large number of the samples from the Kontakt 5 pack (separate close mic and room mic samples) These are provided with up to 16 velocities of each articulation and 3 round robins and total 2893 24-bit WAV samples. Customers can build their own patches for their favourite samplers.

The All Samples Pack of the Rogers Big R Dub Kit is available exclusively from the Drumdrops store costing £ 28.00. Head over here to find out more.