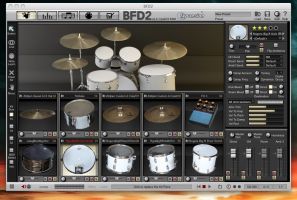 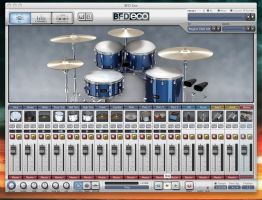 The Rogers Big R Dub Kit is the ultimate sounding dub kit. This kit has been used to record Drumdrops in Dub Volume 3 and Drumdrops in Ska as well as many other commercial releases. The kit comprises a 24" x 14" Bass Drum, a Ludwig Black Magic 14" x 6.5" Snare Drum, a Ludwig Acrolite 14" x 5" Snare Drum, a huge 18" x 16" Floor Tom, and two Rack Toms, a 14" x 10" and a 13" x 8". The cymbals used were 15" Zildjian A Sweet Hi-Hats and a 17" A Custom Crash. Percussion for this kit includes a 14" Timbale drum and a set of Bongos. Also included is some Electronic Percussion using a Boss PC-2 Percussion Synthesizer.

The "BFD pack" that has been been built as an expansion pack for FXPansions BFD3, BFD Eco and BFD2. The pack comes with 39 articulations which have been recorded up to eighty velocity steps and in total it contains 4951 samples. This kit also includes 16 groove palettes. These are split into 359 4-bar dub loops.