Ships Piano MK2 by Sound Dust is Soundware (e.g. samples or presets that load into other products). 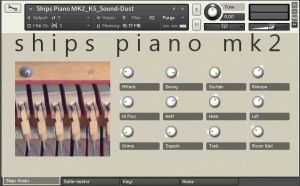 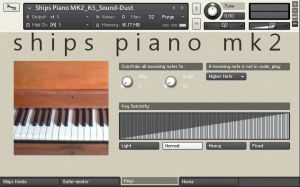 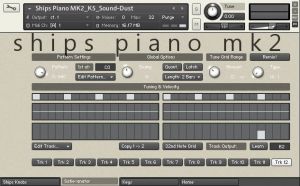 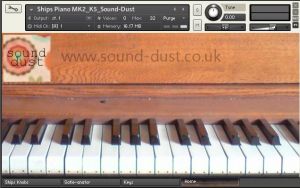 Designed by JB Cramer and Sons of London in the late 1800's, the ships piano (or yacht piano) was built especially for the cramped confines of Victorian pleasure boats. Just the ticket for a little sea bound entertainment in the good old pre-iPod days of the empire.

International adventurer Captain Robert Scott (of the Antarctic ) was apparently a fan and always had one onboard for those times when a hearty, spirit lifting sing-along was just the ticket. James Joyce also briefly mentions a ships piano in his book The Dubliners...

A ships piano is basically a tiny rudimentary upright piano with a five octave keyboard that folds upwards to save space. It has no bottom half and sits either on a low table or a stand with a small leather and chain contraption dangling from its bottom that loops around the foot for the sustain pedal. Because of its small frame size it struggles with low notes so the bass strings are very wide gauge and particularly flabby, resulting in a strange almost atonal metallic sound in the lower reaches.

The ships piano is no Blüthner or Steinway, and there's no chance of extracting rich sonorous tones from this fella... but its charming simplicity has lots and lots of useful character. It is very plinky without being too plonky... if you know what I mean.

Every usable white note is sampled binaurally for extra realism with 4 and sometimes 5 velocity layers for 155MB.

Format: Kontakt 4 and above (not Kontakt Player).