Siege Drum by unEarthed Sampling is Soundware (e.g. samples or presets that load into other products) for macOS and Windows. 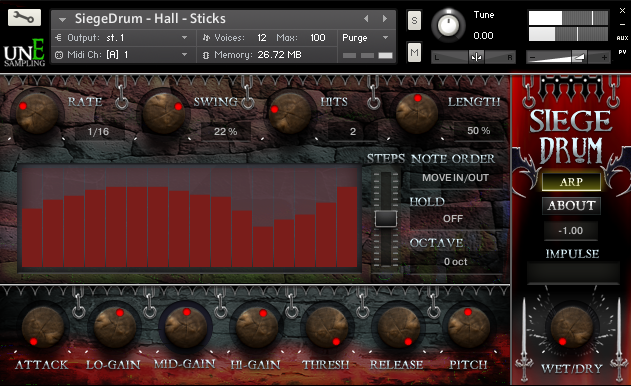 Whether a dragon is attacking a town, or a squad of archers are releasing a hellfire of arrows on to a castle... Siege Drum should be in your composing arsenal to help up the drama of your music. Our third release brings a cost effective set of cinematic / epic drum multisamples to your composing palette for your next film or game score.

For Siege Drum we have recorded a large 13 x 13 Medieval Davul Drum in both a studio setting for extremely dry recordings as well as in an old late 19th century hall built in 1896 giving the recordings a very unique and nice sense of space. Only compatible with the full version of Kontakt 4.2+ For more info, demos, and a video walkthrough, please visit the main product page: www.unearthedsampling.com/siege-drum

We recorded (in both venues) the drum being hit by hands, a large leather mallet, a rattan, as well as traditional sticks each giving the drum a very unique timbre. Every hit has 4X Round Robins and up to 5 velocity layers. 14 patches in all, this drum can have some serious low end or even masquerade as a tom, open snare, or frame drum. If played together these patches can sound Massive. Also included are a series of FX and rolls adding a nice bonus to the entire package. The GUI has an Arpeggiator, pitch control, 13 custom Impulse Responses, a dry / wet control, and even the ability to control the EQ, attack, and release of the samples. The pitch control in particular makes Siege Drum into a wholly new instrument.