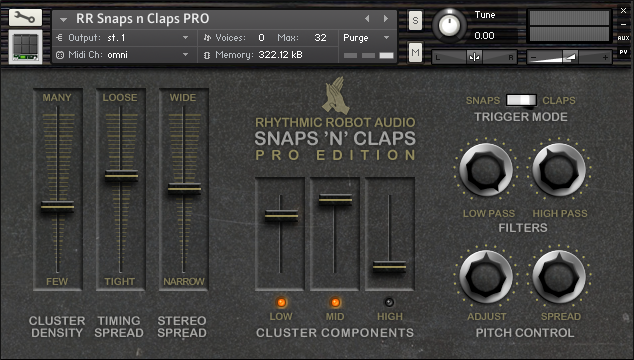 Plug-in, App & Soundware Format(s)
Operating System Availability
Audio Demos
Snaps N Claps Pro Demo 1Snaps N Claps Pro Demo 2
Miscellaneous Information
Important Note
Requires a FULL version of Native Instruments Kontakt version 4.2.3 or higher (all versions of Kontakt 5 supported). Kontakt Player is NOT recommended and will time out after 15 mins or so. PLEASE MAKE SURE YOU HAVE A FULL VERSION OF KONTAKT BEFORE BUYING, AS WE CAN'T GIVE REFUNDS FOR SOFTWARE BOUGHT IN ERROR!
Max. 6 items
Latest Version Changes [view all]
Any OS Version
1.0

Rhythmic Robot's Snaps'n'Claps PRO is a further development of the highly successful Snaps'n'Claps fingersnap and handclap generator. Like the original Snaps'n'Claps, it allows the user to dial up single or multiple fingersnap and handclap samples which are carefully round-robined to maintain a natural feel. However, the PRO edition takes control over the source samples to a much higher level, giving the user sliders for the proportion of low, medium and high-pitched snaps or claps within each "cluster" of sounds; the timing spread of each cluster, from loose to tight; the precise number of snap or clap components in each cluster; and their spread across the stereo soundfield.

Snaps'n'Claps PRO also grants control over fine-tuning, tuning randomisation, and filtering of the sound clusters (high- and low-pass) to enable the sounds to seat better in a mix. The result of these controls is that extremely naturalistic, organic clap and snap sounds can be generated (though the controls can also be creatively abused if the user wishes).

The underlying samples were recorded completely dry in an anechoic chamber, and comprise multiple samples from a variety of hand-sizes in order to provide the most authentic "group" clusters possible. The whole instrument is controlled from one simple, intuitive user interface, and features an extremely small memory footprint.

Snaps'n'Claps PRO is available now from Rhythmic Robot and requires Kontakt 4.2.3 or later to run (including Kontakt 5, all versions). It does not work with Kontakt Player.