SoftDrive GV by AXP is a Virtual Effect Audio Plugin. It functions as a VST Plugin. 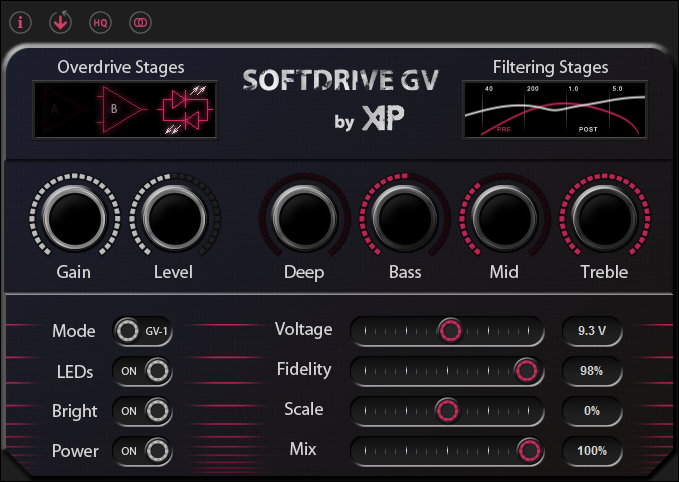 SoftDrive GV is a virtual-analog model of the Marshall "Guv'nor" and "Guv'nor GV-2 Plus" guitar distortion effects. The Guv'nor is a solid-state distortion pedal first issued in 1989 to recreate the sound of a cranked up Marshall stack in a small stomp-box format. It became rather popular in the 90's and is still used widely nowadays for its quality high-gain sound and a its tonal versatility. It was re-issued in the early 2000 in an updated housing and incorporating a new "Deep" control to mimic the effect of a JCM2000's "Deep" switch.

This VST model is a tribute to the original effect and models the circuits of both the "vanilla" Guv'nor and its modern GV-2 variant.

SoftDrive GV expands on the original design and brings in new possibilities unthinkable of outside of the digital realm. In the spirit of my prior creations, this plug-in also features a few things to visualize what's going on inside the box.

The effect's controls are broken down into 4 sections:

The plug-in UI has 2 areas that visualize the model:

1. Overdrive Stages - features an icon for each stage where saturation occurs:

- Tell your friends about my site and my plug-ins
- Send me audio samples you've made with my plug-ins
- Drop me a line or two with any comments and suggestions
- Make a small donation through my web site.

This software is licensed for an unlimited usage by everyone, including personal, commercial and scientific applications. You are NOT allowed to modify it (including both the binary code and the copyright information) or sell it, in either stand-alone or bundled form. The plug-in is provided "as is" without a warranty of any kind. In no event I shall be liable for any damage associated with the usage of this software. I encourage further distribution by sharing a link to the effect web page.

Please send your questions and suggestions to my e-mail or post them on the site.

AXP is not affilated with or endorsed by Marshall Amplification.