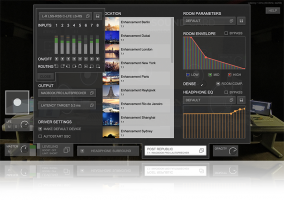 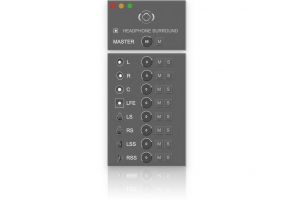 Surround monitoring with your favorite headphones.

Available in two options: see options above for pricing:

The Spatial Sound Card Pro (SSC-Pro) runs as the standard audio device of the computer and receives every audio stream automatically. The more than 60 binaural room virtualizations originate from a constantly growing number of high-end studios and dub stages like the ARRI Stage One, MSM Munich, and others. The technology used in the SSC was used on major Blu-Ray releases (e.g. The Expendables I -III, Fifth Element, and Kraftwerk 3D).

To optimize the virtualization, the SSC provides sensitive parameters for individualization. This includes customizing the frequency curve of the used headphones. Presets for a lot of well-known headphone models are included.

The SSC doesn't do so-called up-mixing or fake-surround processing what means to playback a stereo source on 5.1 or 7.1 anyway. It provides straightforward a natural and emotional listening experience of stereo and surround sound with a very precise positional audio reproduction.

The Spatial Sound Card Pro works with all applications on the computer that support up to 7.1 audio output. These include media players like VLC and FLAC-Player as well as video / audio workstations, games and 360/VR applications.

The SSC is recommended for media professionals from the audio, music, 360/VR, video, games and multi media domain as well as agencies and companies with workstations that need high-quality audio monitoring.

Average user rating of 1.00 from 1 review
Read all reviews Add A Review

... oh man really good software, but one sad thing I used it half a year and from then on it wasn't compatible any more with my Mac System. Wanted to give it a chance again, but got in some registration issues ... after one hour I gave up ...