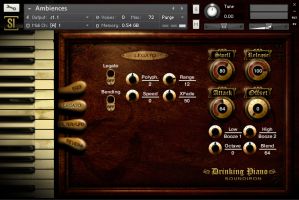 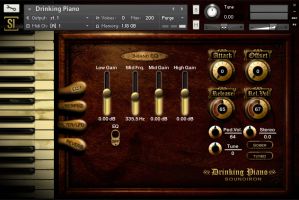 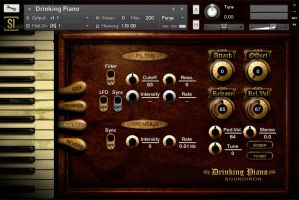 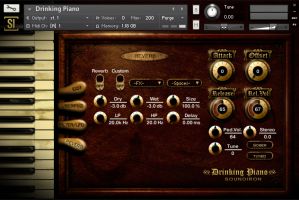 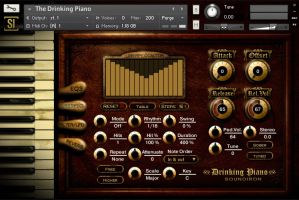 The Drinking Piano by Soundiron is an upright piano library for Kontakt that features an old time beer hall sound, evoking classic saloon, ragtime, honkey tonk and silent film music of the late 19th and early 20th centuries. Captured with a historic solid mahogany Ivors & Pond over-sized upright, it has the well-worn sound of a hundred-year-old instrument that has been played hard. Each key has a uniquely aged character rickety key action, with unreliable dampers, loose hammer mechanisms, worn felts and plenty of dust. It was recorded with large-diaphragm mics on the strings in a small hall to capture the presence of a close, dry studio recording with just a hint of live ambiance in the tail. The piano has been sampled with an average of 9 velocities per note and 12 velocities per release, with a full selection of dynamic action, pedal, bench and hardware sfx. It even features a special muted bass string finger-pluck instrument as well.

Please note: This library requires the full version of Kontakt 4.2.4 or later. The library also features a few special K5-only presets that allow Uberpeggiator pattern saving/loading - a K5-only feature. This is an open-format library, so the free Kontakt Player does not support this product. However, the sample contents are included as stereo wav files that can be imported into most audio software.

This walk-through video by Brad Halverson that takes you through our new Drunken Piano Library in detail. {See video at top of page}

Products similar to The Drinking Piano...