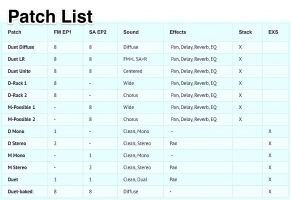 The Duet EP Soundware is based on 2 classic patches. One is a DX7 Patch, the other is an RD-1000 Patch, which have been edited, sampled and combined up to 16 times, to create a totally original electric piano instrument reminescent of the 80s' top hits.

Both instruments have been carefully sampled:

The Logic Pro X version patches are Logic Stacks, which include up to 16 EXS instances, with individual pan, tuning and delay, plus aux reverbs. Those Stacks are fully editable and customizable.

The Generic version is a set of EXS instruments and the relative samples, and can be imported into almost any sampler. To replicate the Stack, the generic version has one more patch which is a "baked" Stack of 16 EXS instances.

To sample the essence of the sonic qualities of both instruments, we recorded them through a Custom DI, a Studer Console, and Apogee converters.

Products similar to The Duet EP...