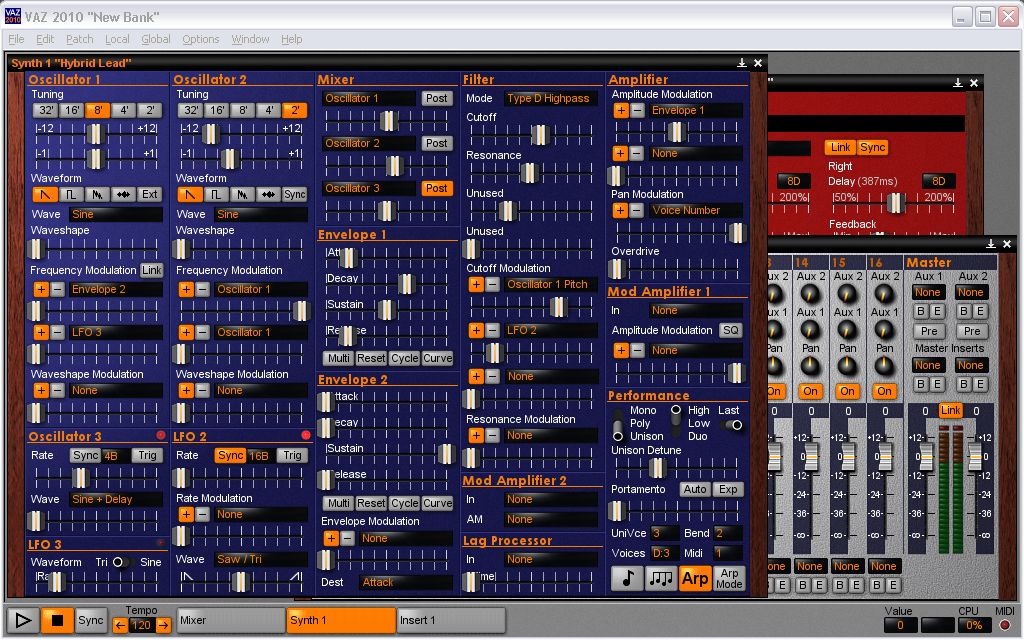 VAZ 2010 is a VA softsynth (and more) with a high degree of flexibility. Oscillators are capable of both VA waveforms and sample playback with wavetable scanning. The 22 filter modes cover a range of distinctive characters such as the Type K and R modes. Modulation is freely patchable and purely audio-rate so analogue-style FM, filter FM and amplifier AM are all possible. Polyphonic unison takes the size of sounds to the next level and synths can be layered and effects added in the mixer. A step sequencer and arpeggiator are also included which can combine to create rhythmic arpeggiations.

Vaz 2010 has a distinctive sound that has a better quality than most of the other subtractive synth plugins out there. It is a stable, mature plugin that has continued to stand up to the test of time (and against numerous other plugins that have came and went).

Many people will want comparisons to analog, real and virtual. Hardcore analog users will never be satisfied with software (to emulate analog), so those comparisons are not useful here. I have owned several digital subtractive/analog hybrids (AX73, Matrix 6, JX-8P and JX-3P) and VAZ can easily reproduce the sounds of these synths with no issues, and in my opinion sounds better than any of these. There is a polyphonic detune which will give it an analog style unpredictability if you're into that sort of thing. VAZ has pulse, saw, multisaw and sample/wavetables for oscillators 1 & 2. A third audio oscillator is possible (with pulse or saw), though it disables one of three LFOs. VAZ 2010 has seven different filter models, and they all sound great. While each filter is not labeled to make obvious what it is similar to (Moogish, etc), there is a ladder style filter that sounds really warm! The type C filter also sounds nice!

This software comes as a VSTi, a VST effect and a standalone version - all included in the purchase price. The standalone version is great for generating quick song prototypes with it's analog style step sequencers. The sequencers are very intuitive for programming leads and basses 303 style. They are also polyphonic! You're not limited to one note at a time like the 303. The randomize function is where the VAZ sequencer really comes in handy for overcoming writers block. You can control which notes are possible, over however many octaves, the percentage of rests, doubles, accents, slides and control slider positions.

My only request for the sequencer is to be able to chain together different patterns via a more intuitive method, like Buzz or Orion.

Using the arpeggiator is very inspiring. When it's activated, the notes in the step sequencer are no longer played, but the rests, doubles, accents, control A and control B are used! This makes possible some interesting bass lines and rhythmic arps! For example, the Control A slider can be used to modulate a parameter such as filter cutoff through an arpeggio.

The internal effects are great and will get you where you need to go. Using the included mixer you can get both DX and VST effects in there should the VAZ ones not be up to your standards.

It is possible to create close to full songs using just Vaz 2010, depending on your style. Acid, techno and some trance will have no problem. Wendy Carlos style baroque? Well it's better suited as a VSTi using a high end reverb in conjunction with it then.

The user interface may seem confusing at first, but it is laid out logically and the horizontal sliders eliminate the need for a larger GUI. I would like the choice to change colors though - you are stuck with the blue/orange/white deal. Not bad, but some may not care for it.

The customer support is superb! I've had all my emails answered within a day!

Value for money - for the price I paid, no question. There is no equivalent out there. None. If I had only one instrument plugin, this would be it.Read more

Vaz instruments have a unique sound that some love and some hate. The sound is a bit edgy compared to most subtractive synthesizers. However, is it not a thin sound that plagues many VSTi’s. This full but edgy sound is reminiscent of the Arp line of analogs. For my use it is best used for arp patterns. With work you can get some nice pads and cover the old string machines of the late 1970’s. One suggestion is to bypass the included effects and use outboard effects of more quality. Good reverb and tube effects will do wonders for the sound of this VSTi. Support is good though the official forum is hardly used. The developer does appear on other forums, including KvR, and is willing to answer questions and take suggestions.

Vaz is a bit different than most VSTi’s in how it loads and runs. When inserted into your sequencer you get a logo box. To access the synthesizer you have to click on a bar to change screens. Single instruments can be loaded through a somewhat confusing menu, and you can load a mixer to route multiple Vaz synths. One positive aspect is the ability to audition patches before loading.

User Interface - Based on the black and orange look of old Arp synthesizers. Pleasing to some and hated by others. The horizontal sliders take some getting use to, but are space efficient and responsive.

Sound - Good but edgy. Not useful for everything.

Features - Basic VA subtractive synthesis with a mixer and arp.

Documentation - Minimal at best.
Presets - Enough to get started but lacking in imagination.

Value For The Money - Too expensive for a basic subtractive VA.

Frequency Of Use - Whenever I need an arp in my song.

Remote Patch Change - Patches cannot be changed from a keyboard. In fact, Vaz has a strange and confusing patch system.

Fun Factor - Low. Good to play but not much to play with.

I probably would not buy again because of the price/feature ratio. The sound is too specialized. Consider the cheaper Vaz Plus for the sound, or the more expensive Vaz Modular for flexibility.Read more

The distinctive Vaz sound my be this instruments biggest deterrent or greatest asset. It can be a bit difficult to control or fit into the mix, but when it works nothing else comes close. The only time I consider Vaz for a pad is when I want to emulate the old analog string machines. When doing so it is best to drop the included effects and use higher quality effects. A good reverb can do wonders for this VSTi. While pads are a weakness for this synth the bass, sound effect, and arpeggio sounds are excellent. This synth is my first call when I want to add an arpeggio. The sound is rich enough to stand out without pumping the volume and slight variances of the filter create a convincing analog sound.

The system of loading patches takes a bit of getting used to, but it is actually quite cool. You open the file menu like you would in other programs, but just clicking on a patch enables it for testing. The file window even has a play button for any programmed sequences. I wish Vaz Modular had this feature.

The price of this VSTi may seem a bit high. I bought it as a downgrade from the Vaz Modular. It does have many of the modern features; sequencer, easy cc assignments and MIDI learn, and effects. I suggest any listen to the selection of effects patches to get some idea of how deep this kit really is.

First let me say I have not been programming synths since the 60's, so I do not judge gear on how well it "emulates", only on how it sounds and its usefulness. Also, the ratings I give are based on inflated KVR averages (ie 'average' score is a 7-8, not 5), because I do not wish to bring down an instruments relative ranking if I think it outperforms others in its class, but give an honest review. So now on to the review...

I purchased this synth after playing around with Vaz Modular, which I was very impressed with. I wanted a VST client, so this was my only option. I am hoping Martin will provide an upgrade path to the Modular version from 2010 when he finishes its VST implementation. I was amazed at the simplicity of programming, but most importantly, the sound. I have not played any virtual synth which is as raw, crunchy, or analog as this - and I have played most of the high-rankers here at KVR. I wish the rating system went to 12 for sound, because this is simply in your face!
As looks go, I think it is just plain ugly. However, it is also the most easily programed synth I've played, so it gets an 8 for usablitiy. I don't give a flying fudgesickle about the presets (and there are hundreds) or navigating through them - in 5 minutes or less I can dial up the sound I hear in my head! This is not the case with other synths (like Pentagon), where I scroll through preset after preset looking for something I can build off. Documentation is poor, but as mentioned already, not really needed. I can't believe people are calling this a one trick pony because some of the presets sound the same! Consider the arpegriator, the analog step sequencer, import of your own wavetables,it's ability to host vsti's & any VST or DX effect you have (it's own FX are usable by the way), it's wonderful seperate window interface - this is my #1 go-to synth for bass, leads, and arps. If Vaz cost twice as much, it would still be a steal for its pure sound of analog warmth!Read more

An great bit of kit. Really worth purchasing. Don't worry about the negative comments, just look at how many positive, satisfied customers there are. This shows the kind of support you will find for this wonderful product.

It may not work like a traditional VSTi in your sequencer, more like Sync Modular in that it opens a different window, but it is still simple to use.

Sound quality is excellent and varied.

Documentation is probably the only thing lacking but since it is so easy to use that shouldn't be too much of a problem.Read more

Just made thisby excuse me please @ 13:42 in Music CafeDon't buy DELL for audio use (or reliability!)by Liero @ 13:40 in Computer Setup and System ConfigurationBLIT headacheby Z1202 @ 13:33 in DSP and Plug-in DevelopmentView All Latest Posts