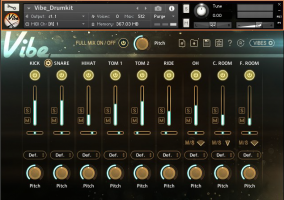 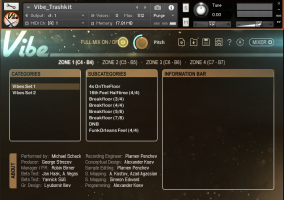 Being in active developement for more than 8 months, VIBE is a library that heads into new territories for Strezov Sampling. VIBE is special because it was recorded in the wonderful acoustics of SOFIA SESSION STUDIO (large hall acoustics) by engineer Plamen Penchev and features the wonderful performances of drummer extraordinaire MICHAEL SCHACK.

The library is comprised of two drumsets – one ordinary DRUMKIT and one TRASHKIT.

VIBE has deeply sampled one-shot samples as well as 145 performances, recorded in 13 "genres" in multiple variations (called "vibes"). The library features the X3M engine first introduced with Thunder X3M, giving you the options to load different groves into different zones of the keyboard, as well as the option to customize the sounds.