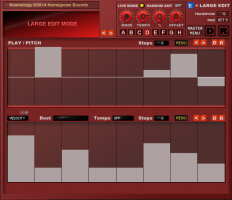 Kosmology - Evolution by Homegrown Sounds is Soundware (e.g. samples or presets that load into other products).
Product
Version
1.3
System Requirements
Kontakt 5
Tags
Tags:Kontakt InstrumentHomegrown SoundsKontakt 5Kosmology - EvolutionSequencerSynth (Sample Based)
Soundware
For
Native Instruments Kontakt
Soundware
Formats
WAV 24-Bit
My KVR - Groups, Versions, & More
6 KVR members have added Kosmology - Evolution to 5 My KVR groups 6 times.
Not In Your MY KVR Groups
(or group limitation prevents versioning)
2 0 I Own This
1 0 I Want This
1 0 My Actual Studio
1 0 Favorites
+1 in private groups

The Second Kosmology Installment has arrived, created exclusively for Kosmology, the advanced Sequencing system for Kontakt 5. In comparison to Awakenings it has a slightly harder edge, and also includes a few more FX type sounds with lots of movement which are interesting when modulating the Sample Start Position. It was designed using a DSI Evolver and takes advantage of both the Analog and the Digital side of this amazing instrument. All sounds were created from scratch for this collection and definitely bring the Evolver's unique 'sound' into Kosmology for Sequencing Fun.

All 200 instruments are multi-sampled, using 4 samples per instrument at 24-bit using pure synthesis with very few effects. For the most part they have the Filter Wide Open so they can be upfront and powerful, whilst they can be tamed easily using Kosmology itself. Whilst most sounds are chromatically useful, there are a few effect, detuned and drop instruments scattered throughout the collection to add some nice surprises and interests whilst Wave Sequencing. Fifty new Presets are added using Evolution which adds to the existing 70+ Kosmology presets (all Kosmology presets can be loaded into any Kosmology based Instrument)

Also included are Kosmology Instruments for both Kosmos Classics and Infekted if you own either of these collections.

These Videos are using Kosmology Awakenings, but if you are new to it they give a good idea of what the Sequencer does:

Kosmology is an Advanced Performance Sequencing Tool in comparison with many other Kontakt products, it is not a sample library with a few bells and whistles, rather it's a Music Composition tool which is bundled with a collection of sounds. Although there are a number of presets included, it is designed to be fun and to intuitively build your own complex grooves quickly. In a nutshell you build up to 8 instances which can be switched and manipulated by a series of triggers in real-time. Each Instance contains a Pitch Sequencer, Velocity sequencer, 5 freely assignable Sequencers (from a list of 46 Destinations) and 48 Synth Parameters. Each Instance can have completely different settings and assignments, which gives an enormous amount of freedom for creating unique grooves.

The Golden Crown of Kosmology is undoubtedly the fact that it can perform Wave Sequencing which means that you can assign a sequencer to select the currently playing instruments from all the included Sampled instruments. Both Synth A and B can be targeted individually which leads to instant satisfaction, creating an original sounding sequence can be as easy as selecting Wave A/B in a sequencer and hitting the Random Button.

There is also a Globals section which allows affecting 25 Parameters at the global Level, which can be automated in the host. These Parameters can add or remove from the current values, so as an example you could have a complex MIDI track in your DAW which switches between sequences rapidly and then automate a slow movement on the Cutoff Global which will open and close the filer regardless of which sequence is playing.