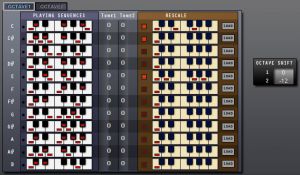 Vortex is a Windows VST Instrument designed to be an inspirational and intuitive multi-timbral sequencer with live performance in mind, combining 12 synthesizers with 12 independent sequencers, an FX engine, pitch rescaling and rhythm manipulation on the fly. Vortex can also be used to control external MIDI instruments as well as the internal synths, either exclusively or a combination of two.

Vortex can be used to create the base of a complete track, or simply as an inspirational source of ideas for your next track. Using the many randomizers alongside the Scale Squasher, patterns can be generated very quickly. The last triggered sequence is instantly displayed ready for editing with a minimum interruption to creative flow. The included presets can provide a good starting point for making music, however a blank slate is only a single click away for starting from scratch. Vortex includes a clearly written manual, internal quick reference screens and some video tutorials to get you started.

Instant gratification is never far away, playing a preset is done exclusively via your MIDI controller, especially when knobs are assigned to the various parameters such as Cutoff, Resonance, Filter Decay, Release etc... Manipulating the entire output of Vortex with these real-time controls allows creating a musical journey full of movement and discovery. There is a dedicated octave of live triggers, for example the programmable stutter which will play a micro-sequence with the press of a key. A further octave carries an octave of assignable pitch triggers each with it's own Scale Re-mapper for altering pitch on the fly.

Vortex has been through an extensive public development/beta testing phase through a good part of the year. There is a fully functional demo version which times out after 30 minutes and contains a limited sample set. The full version comes with 384 instrument presets and 1200+ drum/percussion kits.

Very interesting VSTi! But I couldn't run the Demo:

I installed the Demo v.1.0.0.0 and loaded it in my DAW Reaper. I tried for hours but i couldn't trigger any note: I tried it by mouse-clicking on the keyboard-display and i tried it with my USB-keyboard and I tried it with a midi-track in Reaper. What I have to do to get Vortex working???

And now my Virusscanner (Avira Free) says: Various Trojans in 16 files of the installed Vortex-Demo! I got the Demo from the Website of the Devoloper. I dont think that these are real trojans, but its very unusual i think.

My Problem is solved: The virusscanner deactivated some of the SEM-Files automatically because they were suspicious beeing infected by viruses. I turned the realtime-virusscanner off, now Vortex is working excellent.