Wavestation by Korg is a Virtual Instrument Audio Plugin. It functions as a VST Plugin, an Audio Units Plugin and an AAX Plugin. 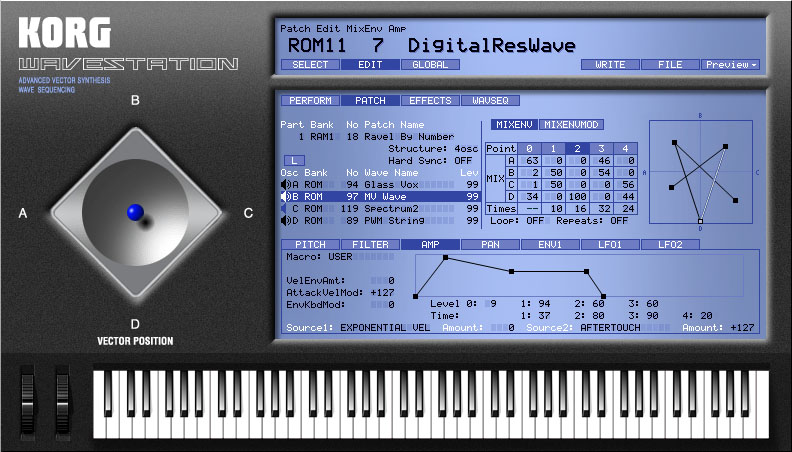 In 1990, the Wavestation introduced the world to both Advanced Vector Synthesis and Wave Sequencing, winning numerous awards and legions of fans. The software addition of a graphic interface and the possibilities of MIDI sync have breathed new life into the Wavestation. The addition of resonant filters is another triumph for the fans of this unique instrument. In addition to the entire series' RAM and ROM banks, the Wavestation adds all the data contained in the six long-sought-after ROM cards for a total of over 1,450 sounds.

This will be short. Note, this (short) review is being written 10 years after the last review of the Wavestation VSTi. And it's still awesome. I've had KLC for a few years and sort of ignored the WS in favour of the M1 but recently my eyes have been opened. It's my current synth girlfriend and will be for a while. Get it before Korg discontinues it or something -- the only reason it's not getting a 10 is because the last update to the KLC plugs was in 2013 (to update to 64-bit) and *nothing* since, so it seems Korg has abandoned them (while still gladly accepting $ for them, naturally!)

I can't believe this hasn't been reviewed.

In the very late '80s, rumors started flying around about an ubersynth that Korg was working on that was based on the old Prophet VS. In 1990, the first Wavestation hit the streets, and showed that the hype was justified. Combining the VS's vector synthesis with wave sequencing and the most powerful effects in a synth to that date, the Wavestation was an instant success in the studio world, but also started the one finger song synth patches that haunt us to this day.

I used to own a Wavestation A/D so I wondered how it compares to the original...

Soundwise, you can't tell the difference. In the version included in the Digital Edition Legacy collection, you have all the sounds and waves from the Wavestation/SR, PLUS all the cards that Korg made for the WS.
In the latest version, there's some very welcome improvements over both the hardware and earlier software
versions, such as resonant filters (finally!) and the ability to change global polyphony. With the original
Wavestation, you were limited by the 32 voice channels; if you had a big bass sequence going on and hit a new note, your sequence would drop out, because the voices were always allocated dynamically. With the new version,
you can go up to 256 note polyphony (if your system will handle it). I find 64 notes is usually enough to keep me
out of trouble.

The software version imports original Wavestation sysex; I imported some of my old performances and they worked perfectly from the start.

From a programming aspect, it's vastly improved from the hardware. While the original Wavestation had a huge (for the time) LCD display, it was still a pain to navigate. The software version is enough like the original so that a former Wavestation owner will feel at home programming it, but won't suffer the eyestrain that the original would induce after a couple hours.

The documentation is good; if only .pdf instead of hard copy. Kudos to Korg for also including the original
Wavestation (and M1) manual.

The copy protection's a Syncrosoft dongle. While I usually don't like dongles, Syncrosoft's aren't that horrible.
After the original install, I transferred my license to my other dongle that has my other Syncrosoft products on
it without any problems.

Loading RAM banks can still be frustrating; as with the original, EVERYTHING in the RAM bank (performances, patches and wave sequences) get overwritten, and it's easy to load up something only to discover that the wave sequence you used isn't there, because it was in a RAM bank you overwrote. I could see where they had to keep it this way though to allow loading original sysex.

To sum it all up; it sounds like the original, it'has some worthwhile improvements and it's a steal at the price.
Plus, with the Digital Edition, you get the M1 (with ALL the M1 and T1 cards) and a cool multi-effects unit. If
you're into ambient/film scores, it's a no brainer. And, if you're into late '80s/early 90's style synth music, it's a must as well.

Some of these user-made presets work with the vst:

The Paul_WS folder contains a really deep patch called "Poseidon's Pad". It seems to be free, he just asks to be credited if you use it commercially.

Neat double info! Thank you both.

Does anyone know for certain where the factory patches are stored on disk? Is it here:
C:\Program Files (x86)\KORG\KORG Legacy\Presets\WAVESTATION.fxb

Want to make sure I have backup of those someplace handy (as opposed to my regular full machine backups).

All the factory banks of the Legacy collection are in the subdirectories of.

And of course you'll put your own banks (those that you make yourself and those that you buy, download, etc.) in a personal directory. My advice: never place any personal file, even musical banks or patches, in subfolders of "C:\Program files" nor "C:\Program files (x86)". Because these trees may cause problems due to security restrictions of use for the owner.

ALL my VST's are put in subfolders of a totally independent tree, as long as it is allowed by the installation program (here at home my tree for music applications is "C:\!MAO" and for VSTs I have "C:\!MAO\32" and "C:\!MAO\64" but you can name all that as you want). And all their presets are in subfolders of each VST (except of course those automatically put in "C;\ProgramData" or in the "Documents" tree by the installation programs, but these special files are always found by the VST without any problem).

And it has also a very bad management of the punctuation at the end of the paragraphs.

A truly great synth. They added another bank of "card" sounds as well.

Yes, and it's been while that all the copy protection of the KLC is like that, without any dongle.

All the KLC collection is within my top 10 synths forever. MS-20, Mono/Poly, Polisyx, Wavestation, and M1. And they feature all the original banks and extra-banks which were made by Korg + plus many third party banks. Thousands and thousands of presets to enjoy.

Great plugins. The c/r copy protection for Korg is a right royal PITA. Twice yearly with the summer change it all has to be re-authorised, every single plugin on every single daw. When ever a new daw is installed and in some cases updated, again authorisation for every plugin. I much preferred the dongle. Keep thinking there's a better option however so far really resisted it.

Otherwise very sound plugins, although the GUIs could do with a resize with today's higher and larger res monitors. Still for the money they are excellent and you get exactly what you pay for imho.

I bought the Korg Taktile 25 controller to have keys to play my Volca hdwr. synth, and the KLC came free with the purchase. These plugins were my introduction to soft synths. I think they're very nice sounding, easy to use synth plugins.The controller and all 5 plugins... for $50 (I had a coupon). What a deal! Even for the full price, they seem very reasonably priced for what they are.

Tape Emulation roundupby Russell Grand @ 11:20 in EffectsLooking for some feedback on my first Liquid DnB trackby Jopmanajop @ 11:18 in Music Cafe