Most important… I, too, am looking forward having Precedence coupled with the incredible quality of Aether: after so many years (and so many other reverbs tested), it's still my favourite reverb!

Thanks for the compliments.

Yes, Aether still has some unique tricks after all this time and remains quite popular...

It's funny bc from the design/DSP perspective various techniques we use in B2 and Breeze are more "choose-your-own-superlative" on paper if only bc they came later, but many people do indeed still love the character specific to Aether.

It's funny because reverb design if often concerned more about "verisimilitude" than "truth". It's all an illusion of space and perception of what is real and what is not real is very blurred. Often exaggerated things become much loved that diverge a decent amount from any kind of objectively measured "truth". They tend to help construct more potent creative narratives and inspire musicians to be creative.

The very strange thing is that I see Aether reviewed in some web pages as a reverb for sound design, for non-realistic effects, while, on the contrary, it seems the most realistic one to me (while, among yours, I would use B2 for sound design, for example). It's probably because I'm in classical music, so my idea of "realistic" is, for instance, a solo piano or a solo cello in an auditorium – maybe others have different ideas of a "realistic" situation.
www.GKweb.it
Mac, OS X 10.14, Logic Pro X
Top

Aether 1.0 was released originally in 2009, 10 years ago. At the time convolution verbs were still king. Aether was, IMHO, the first algorithmic verb to really compete with and some may say beat the current convolution verbs. It also proved definitively it was possible for a plug-in to match the best hardware legends. Since convolution is obviously good at "real" a lot of the original focus of Aether was on its more creative applications, which are just not practical with convolution, and I myself tended to make a lot of very large ambient presets bc I was working in electronic/dance music and scoring at the time where creativity and a "futurism" aesthetic was the key. And I grew up listening to ambient music, so this stuff is in my DNA and so I just can't resist making 100second presets with bizarre damping filter etc. And well, I made most of the original factory presets, so the initial launch had a rather "creative" sound to it bc of this.

The preset designer and producer Den, made an awesome set of more traditional/"real"/acoustic presets shortly after that, that proved Aether does "real" extremely well also.

I would agree that B2 goes even further into sound-design territory, and that is where we wanted to position it. That was the design intent. It's a "spatial sound design playground". Ironically it also because very popular in the scoring community for "normal"/"real" presets, largely do to its incredible sense of depth.

The combination of Precedence and Breeze is most "real" at the moment I would say, particularly if you are using many linked instances as we advocate. Simon's expansion gets pretty creative though.

So things get blurry somewhat, and yes, different people have different perspectives on what "real" is. If you come from a purely electronic music background your perspective may be quite different than say as classical or jazz musician with performance experience.

I am still not convinced that "exactly real" is what is the platonic ideal for reverb. Most real spaces are imperfect. It's a simple thought experiment to realize that concert halls are built to attempt to reach some specific acoustic/mathematical goals for aesthetic reasons. But these goals may not be obtainable with reasonable constructions methods, materials, and needs of having human beings somewhere in the space. So I would say the "design ambitions" for concert halls are better to emulate than the concert halls themselves. But it is good to be aware of the general physics of acoustics etc.

In Breeze 2 and precedence I did study such "real" topics significantly more than in the past and they are definitely more "physically informed" than say B2. B2 was never trying to be "real". It does not really care about real. It cares only about sounding great/interesting and inspiring creativity. Aether's design philosophy does care about real, at least based on our early 2000s understanding of what "real" is/was. Future Aether versions will care even more about real as well, and we have of course not stopped learning...

Building things is fun. It's always humbling to discover how much you don't know. Even when you are an "expert"... That's the cool part. it'd be no fun if there was not something new to learn.

Regarding setup/tutorials/etc. check this out:


Dry Orchestral Stems created by Beat Kaufmann as part of his "Mixing an Orchestra" tutorial.

Very basic/limited other mixing is applied. Additional EQ, compression, gain automation and general mixing would normally be done as well but the purpose here is to show the 2CAudio PBJ Workflow in a real project and focus on the quality of the spatialization.

Note the extreme positioning of "Fanfare" brass elements as to emulate the practice of sometimes putting such elements offstage in the balcony etc.

If you have Cubase you can download this project and solo/mute tracks and experiment with your mix etc.

This requires the full version though as the demo version is limited to 8 instnaces of P and B, and will not load preset data. So you need the full versions to explore the project file effectively.

I am preparing many other examples and will make videos from them as well.
www.2CAudio.com | www.galbanum.com | www.designersound.com
Top

I love aether on rooms tho.
My use for 2C Audio is like this usually:
B2: short ambiences, Halls, FX
Breeze2: Plates, wooshines
Aether: Rooms, soft ambiences
Top

Yes, the spatialization in the above example is extremely realistic! Wow… (There are still some minor flaws in the strings, in my opinion, but, anyway, very good example!)
I don't have Cubase – Logic as main DAW and Reaper as secondary DAW, here.
My use for your reverbs is usually Aether for medium and large halls with instrumental music; B2 for electronic music (I mean, contemporary classical electronic music); Breeze when I need precise spatialization.
www.GKweb.it
Mac, OS X 10.14, Logic Pro X
Top

Or something completely different, a sparse 4-track pop vocal ballad: 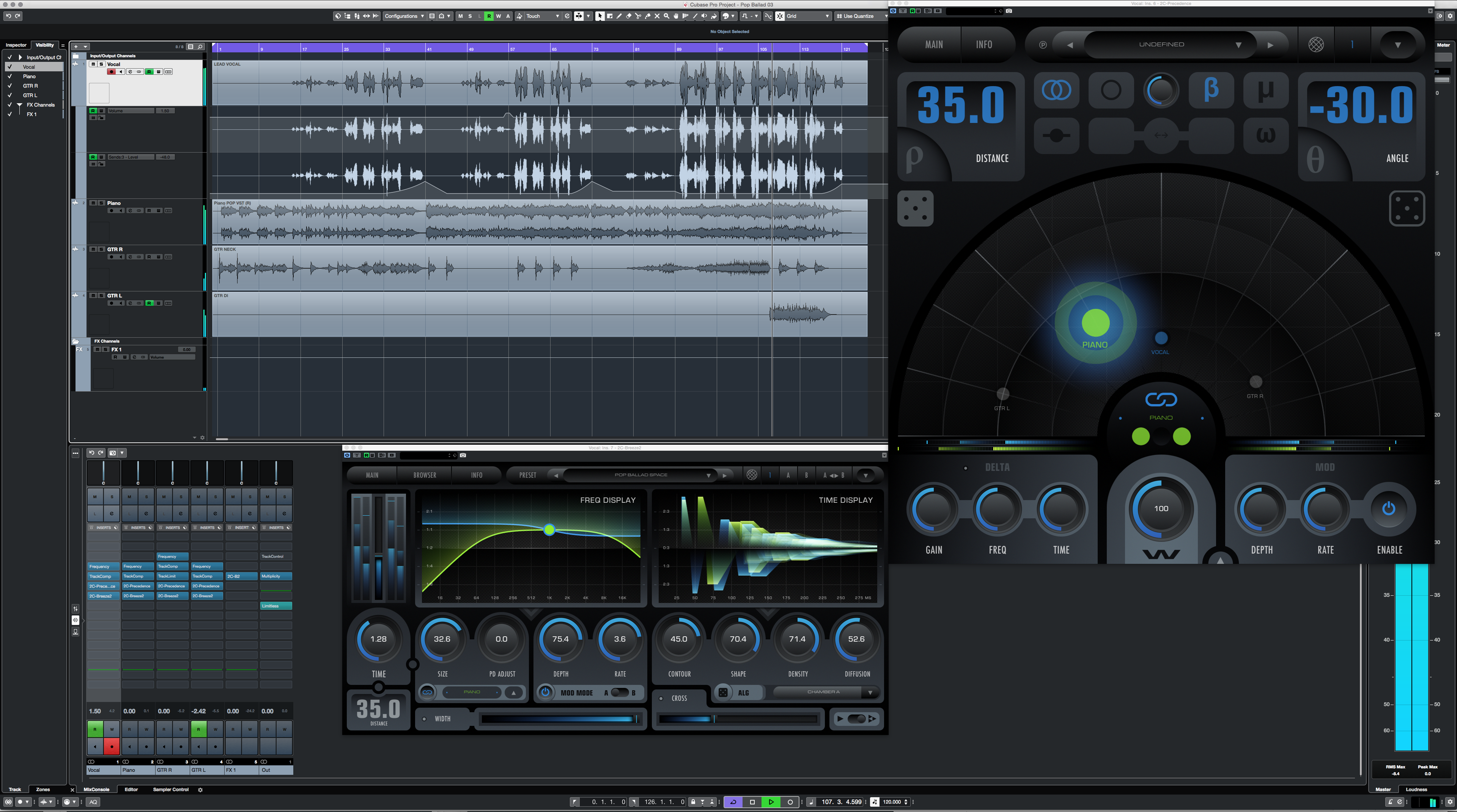 Not sure if its related to Breeze or Precedence but sometimes when i save an instrument in Logic and reload it Breeze and Precedence are back to the default 50% wet. But mostly just happens with the second (or more) connected instances (f.e. inside a stacked track).
I also would like that it not always jump to this default value if i connect a Breeze instance with Precedence (this seems to happen sometimes too indeed if i reload a Logic patch and all is back to 50% like it does not save the state correct).
Is there a way that i just could stay at the settings from the preset (or that Precedence get the value from Breeze 2 and not vice versa).
Edit: It seems Breeze 2 is the one. When i unlink them Precedence reload with the correct state but Breeze 2 jumps back to 50% default wet.
Top
1613 posts