Songs That Use Roland CR-78

Not a fan of man buns meself
Hi-de-Hi!
Top

This is a cheat answer, but
Brooklyn Funk Essentials - The Revolution Was Postponed Because of Rain
as it prominently features a sample of the intro CR-78 part from "Heart of Glass"
Top

aciddose wrote: ↑
Tue Apr 07, 2020 7:33 pm
The most distinct thing about the cr-78 has got to be the method used to apply the amplitude envelopes leading to the saturated exponential response... so it's a very steep edge where it goes out of saturation (clipping to 100%) and suddenly drops off fast. If I'm not mistaken they use an NPN transistor base as a gate and apply the filters afterward. So the envelope while above about 650mv is "on", and below that an exponent is applied. The signal passing through the gate is distorted by the exponential function during the decay.

That style of circuit is the same as the diode gates used in divider organs and their associated drum circuits during the 70s and of course sounds the same or very similar.

Thank you. This information is also really helpful. I have to write a 2000 word essay on a piece of equipments impact on a music period through different genres. 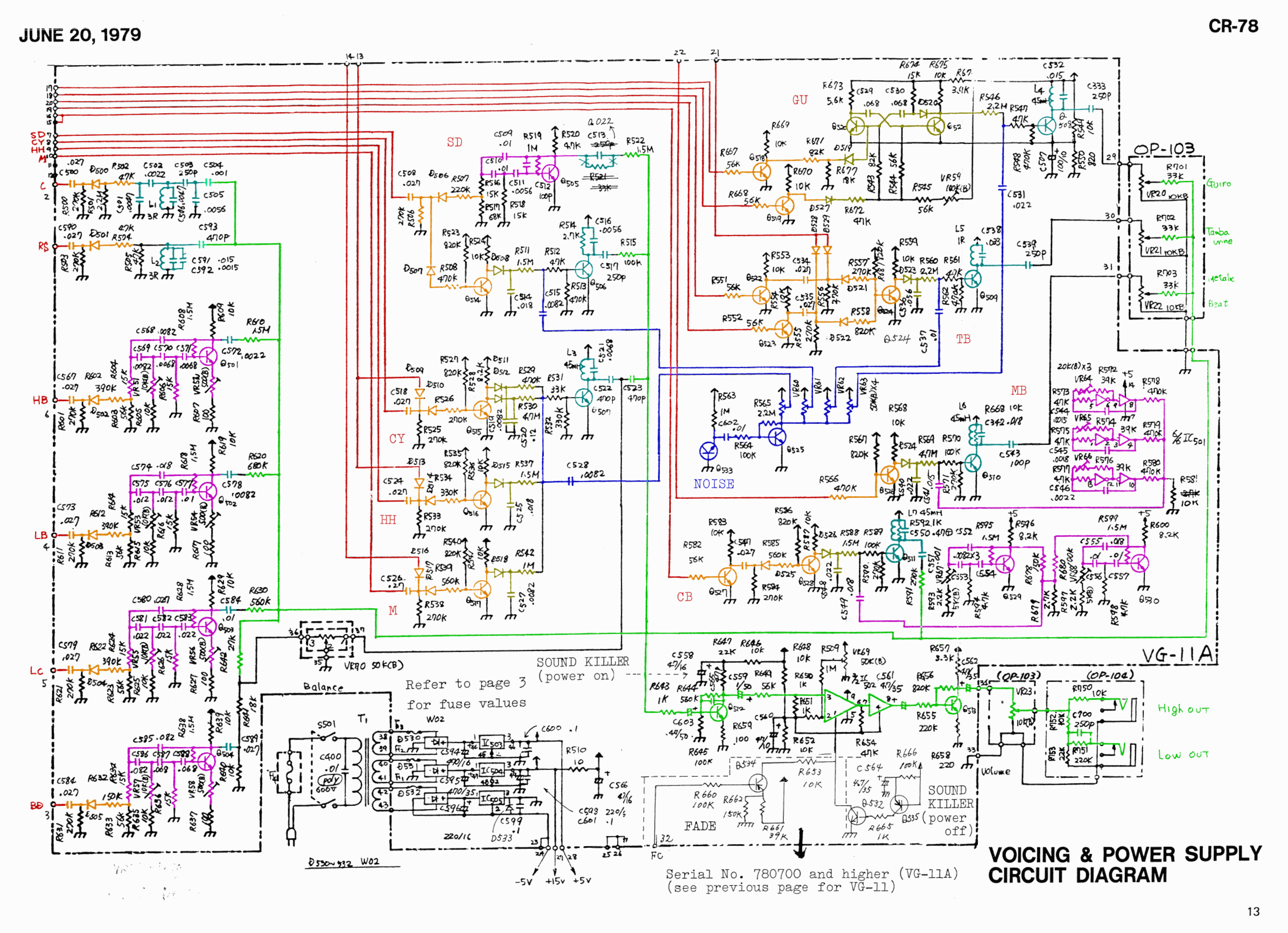 From this schematic you should be able to see a few interesting things.

I've used highlight to mark the schematic with: I'll just make a rough list of pointers: The snare drum and others use simple high-pass (6 dB/o) RC filters. Others such as clave, rimshot, cymbal, hi-hat, maracas, guiro, tambourine, metallic beat, cowbell use a low/band-pass LC filter to achieve higher Q.

edit: Regarding pt.10, it isn't accurate to say averaged as the input is 1k into an inverting amplifier with feedback gain control. The feedback is 560k and there is a bias point set by 100k to ground at the base. So technically speaking, each input has its output resistance with 1k added due to the series resistor at the amplifier/mixer input. There are in addition multiple points where volume is adjusted, so the level input to the mixer is not solely determined by the input impedance.
Last edited by aciddose on Thu Apr 23, 2020 1:37 pm, edited 1 time in total.
Free plug-ins for Windows, MacOS and Linux. Xhip Synthesizer v8.0 and Xhip Effects Bundle v6.7.
Top

Here's what the hi-hat output + envelope looks like at the base of the transistor: 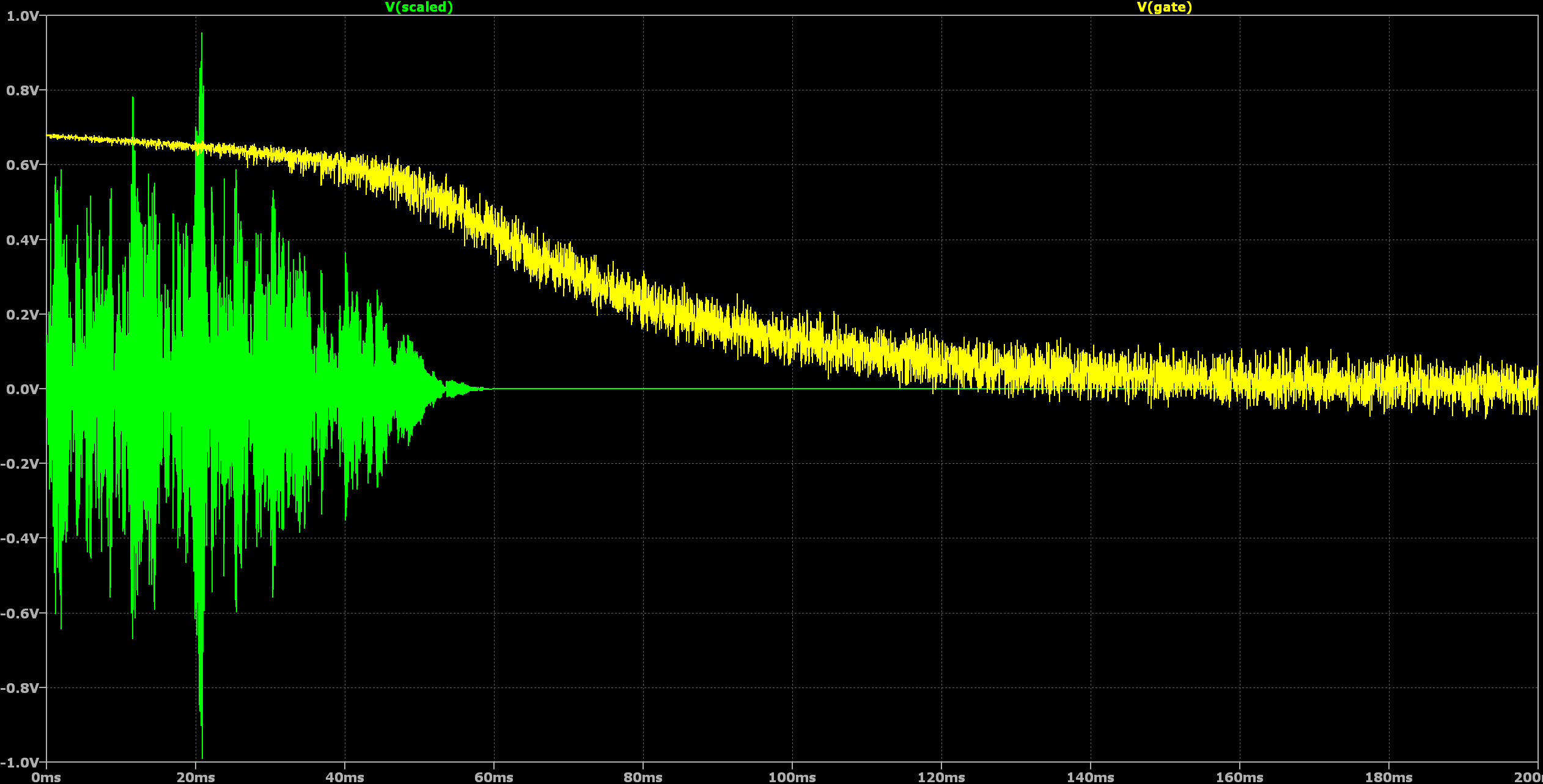 Without linearizing feedback the transistor can said to be operating "as a switch". It's either on or off, or in the process of switching quickly between the two.

The older style of "vibrato" (actually a misnomer for tremolo circuits!) sometimes exhibited this style of amplitude modulation in cheaper circuits. The more expensive later circuits usually used opto-resistors called "LDR" driven by a lamp. The first such circuits however used materials which are not at all like modern semiconductor LDRs, a famous example being the LA-2A.

The older style gave a unique timbre with its rapid on/off switching which created a mood very different from modern smooth sine amplitude modulation effects. The older drum tone synthesizer circuits with this style of envelope would be later reproduced in the famous "gated snare" effect, utilizing effects circuits including gates and compressors or other dynamics processing along with reverbs, echos and so on.

Oh my god so helpful. Just seen this. Thank you everybody!!
Top

I caught a bit of a very odd and dated 80's movie named Liquid Sky (it's on Amazon Prime if anyone's interested) and it had this sequence with a girl singing with what looks like a CR-78 bound to her side
https://www.youtube.com/watch?v=yVGOmDMrREU
Top

Wow - I was living in NYC when that movie came out - and did see it. It was playing at the art houses for years. Good catch!
Top

I can't decide if that's a cr-78 or not? It looks like a modded version? Does it have a screen on it?

If it is the cr-78 this would be great for my essay.
Top

I thought I would make a playlist for everyone to enjoy. Was heart of glass a cr-78? If I made any errors let me know. Also any more I can add would be ace. Thanks.

If it is the cr-78 this would be great for my essay.

Even with 1080P Amazon Prime it's hard to get a screengrab of it that isn't completely out of focus, but this is the best I could get 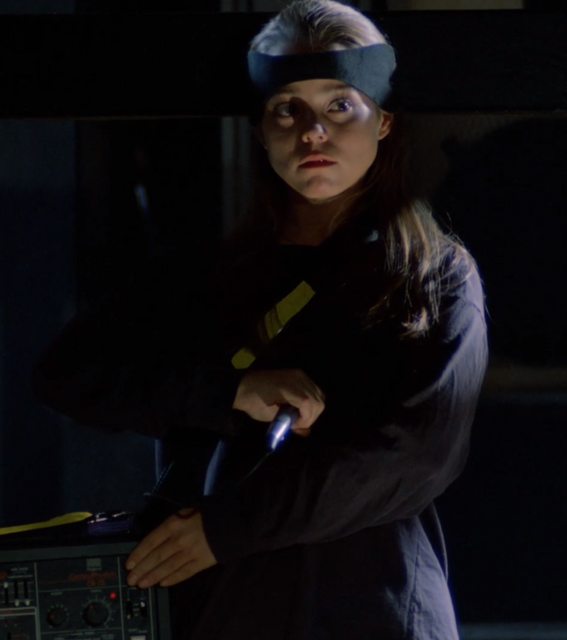 the lettering looks right for a CR 78 to me. If it was a bigger budget movie they may have used a lighter mockup, but I'm guessing they did just gaffa tape and strap a CR 78 to the girl here.
Top
43 posts

can someone please do a great a circuit emulation VST of analogue drum machines?by aciddose @ 15:51 in InstrumentsView All Latest Posts