MenuMagic v3 is out! Click here for MMv3 info!

★ MenuMagic v2.2 has been released!
This update is free to registered users – use your personal download link to download your copy of the new v2 MenuMagic.
Newsletter with announcement has been sent to all registered users. If you haven't gotten your email please check your spam or trash folder.

This is a recommended update. Bug fixes and improvements should improve your MenuMagic experience.

Notable Changes:
Multiple areas:
• Bug fix: Improved handling of VST3 plugins to prevent them from losing their categorization.
This could happen Status tab
• Fixed issue when expanding Status Grids where 'Grid #' button remained floating on screen when grids were expanded.
• Fixed issue where Status Grids were being reloaded twice for every screen update.

Categorization tab
1. New! Can now list plugins either by plugin name or by vendor name and setting is remembered.
2. Clicking on a plugin name now shows Vendor info in detail information under Categories panel.
3. New! Added button “Categorize by Plug-in Vendor”!
Note: This is explained in detail in a subsequent posting. 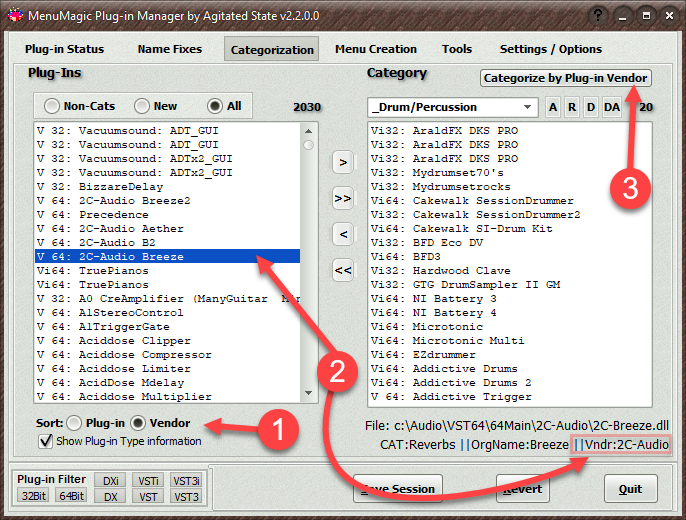 Name Fixes tab
1. Fixed bug in Name Fixes where you lost changes if you resorted the plugin list by hitting Shift-Right-Click before saving changes (i.e. not saved by clicking on Accept Fixes).
2. Can now list plugins either by plugin name or by vendor name and setting is remembered.
3. Clicking on plug-in name now shows Vendor info in detail information shown under plugin list. 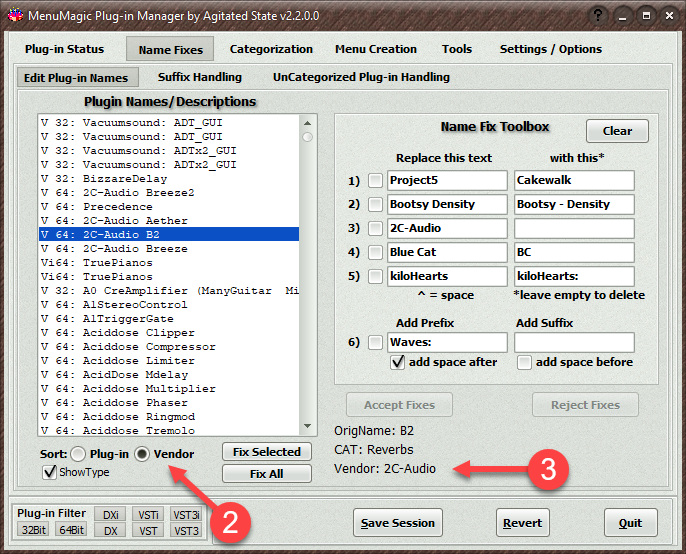 Menu Creation tab
• Rewrote major sections of code handling Menu Creation plug-in menu tree to resolve various issues with rearranging plugin menu tree and make drag'n'drop operations behave more intuitively and eliminate quirky behaviors.
• Fixed old bug on MenuCreation tab where if you didn't have the root folder selected/highlighted when you saved your plugin layout menus that they could be corrupted.
• Fixed bug that allowed you to drop folder into another folder at plugin level (level containing actual plug-in references).
This could cause menu folders to disappear in Sonar/Cakewalk.
- For example if all plugins in that folder were VSTi Cakewalk/Sonar won’t show the containing folder in the FX bins thereby hiding any subfolders.
• Fixed reverse sort bug that under certain circumstances happened when moving one folder into another folder if the folder being moved contained subfolders.

Settings/Options tab
VST Scanner panel
• Fixed bug where MenuMagic could remain minimized on Windows Taskbar after running VST scanner.
• Bug fix: When you click "Reset All VST Plug-ins" - scanner is now launched after Cakewalk's plugin database is reset.
Previously you had to manually launch the VST Scanner as a follow-up action and could have issues if you failed to.
• Launch VST Scanner – you can now easily run the scanner sequentially multiple times.
Not a biggie but if you’re like me and always run the scanner at least twice it does save on mouse clicks.

Settings panel
• If MenuMagic is set for CbB the PilManager settings are now hidden.
This setting was only relevant to Sonar versions before X3.

Tools tab
• If MenuMagic is set for CbB the PilManager button under bottom panel under Tools tab is now hidden. This feature was only relevant to Sonar versions before X3.

• Removed Launch Cakewalk menu item. This may or may not be upcoming feature but the placeholder in the menu was accidentally made visible on a previous release and besides it was showing “Launch Cakewalk 32 bit” which does not exist.

Many other tweaks, bug fixes, etc.

Known Issues:
• Built in Help documentation does not contain information related to this release.
Sorry but new changes require that many screen shots be redone and rather than hold up release for another couple of weeks we have decided to release MenuMagic without it.

In this example I have already created a Plug-in Layout Menu organizing my plug-ins by my criteria (for example by usage) and I want to add a Vendor menu level to it.

After launching MenuMagic (or if it's already running) I go to the Categorization tab... 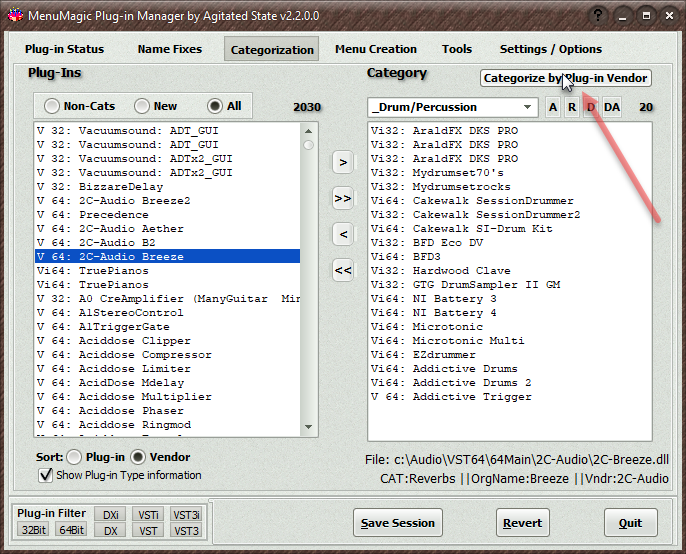 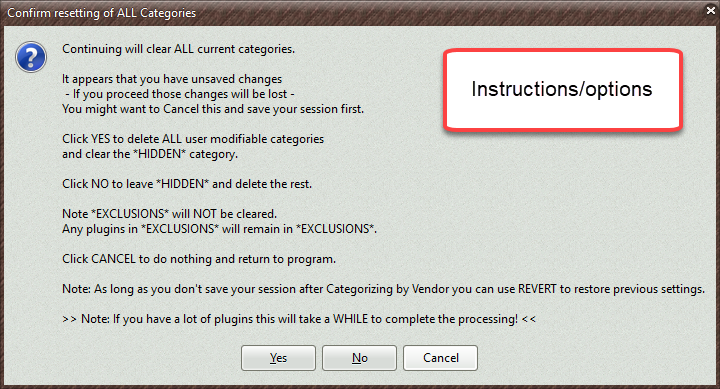 On my system (i7 with 24GB RAM, SSD drive) processing took 4 minutes. 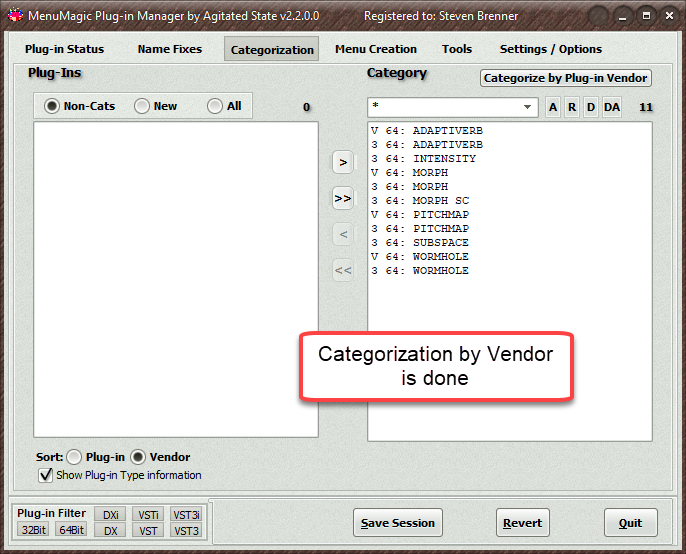 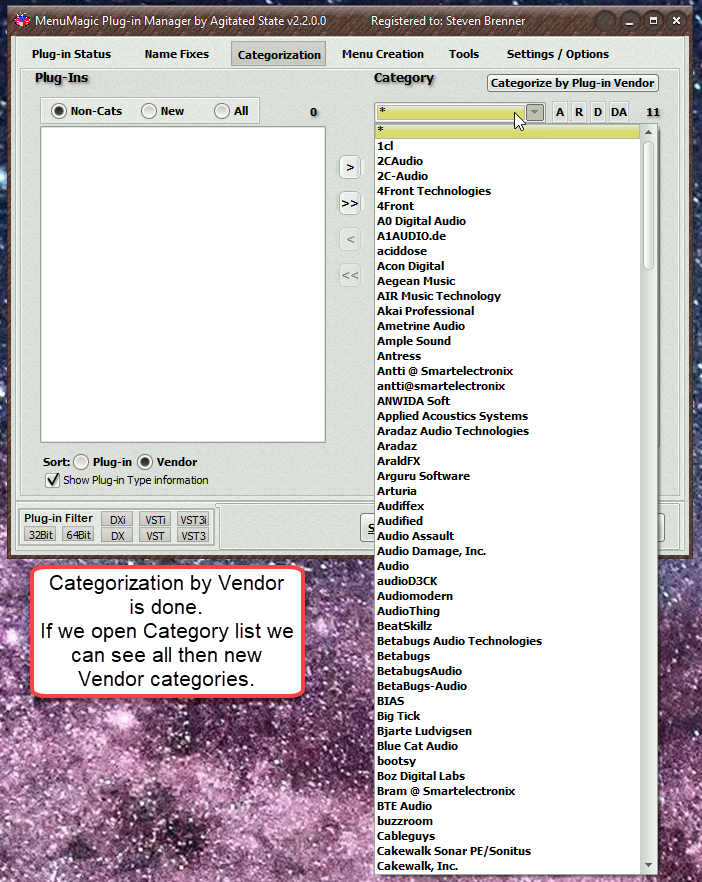 Next click on Menu Creation tab then on Merge Layouts… 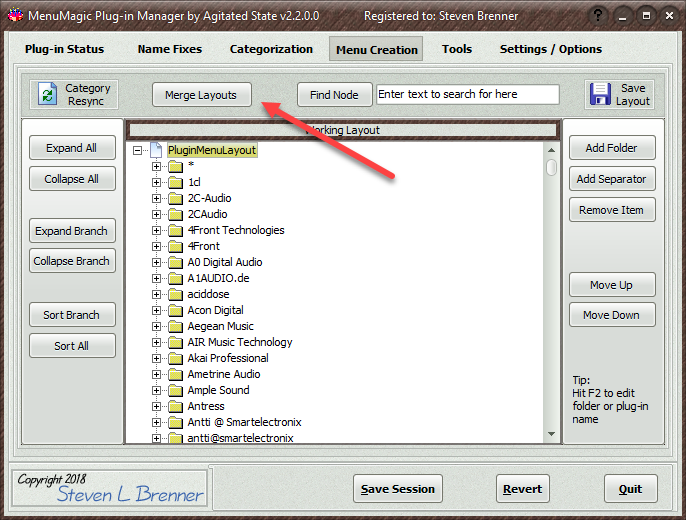 In this example I want to add my new Vendor menus to an already existing Menu that I created earlier. 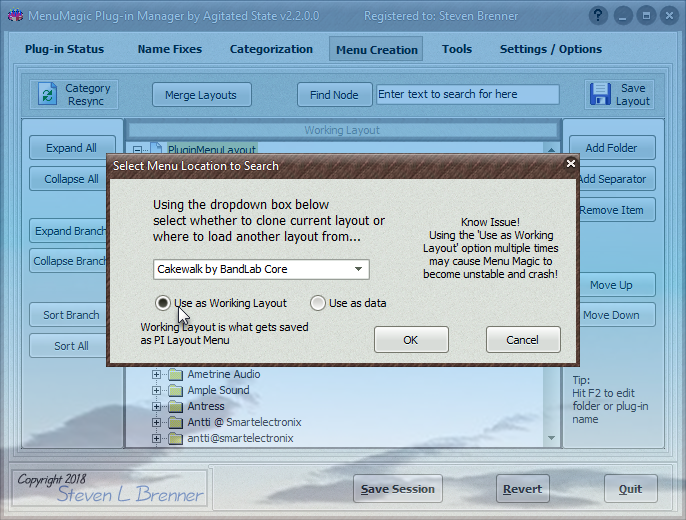 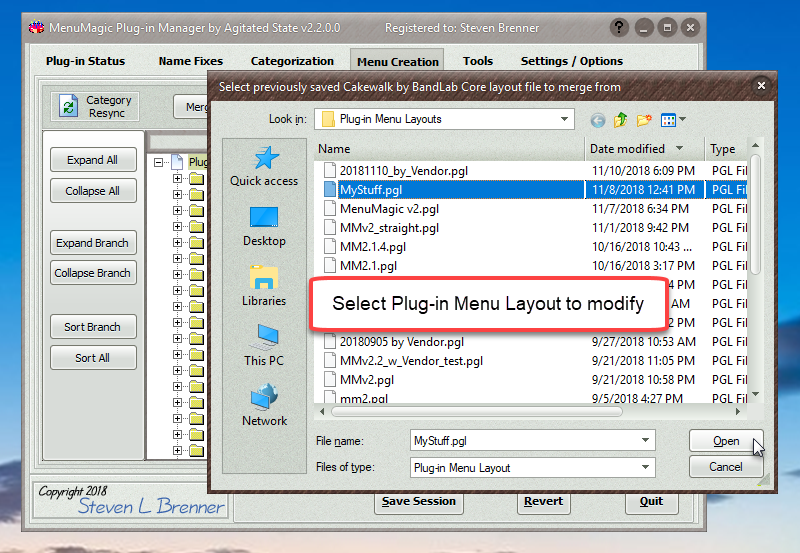 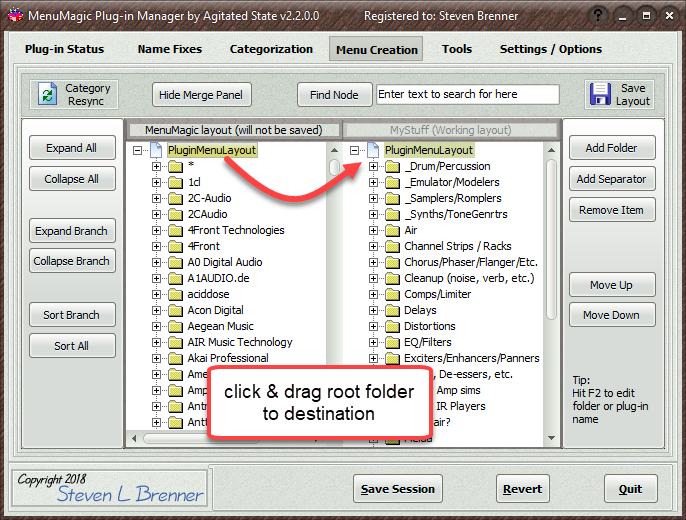 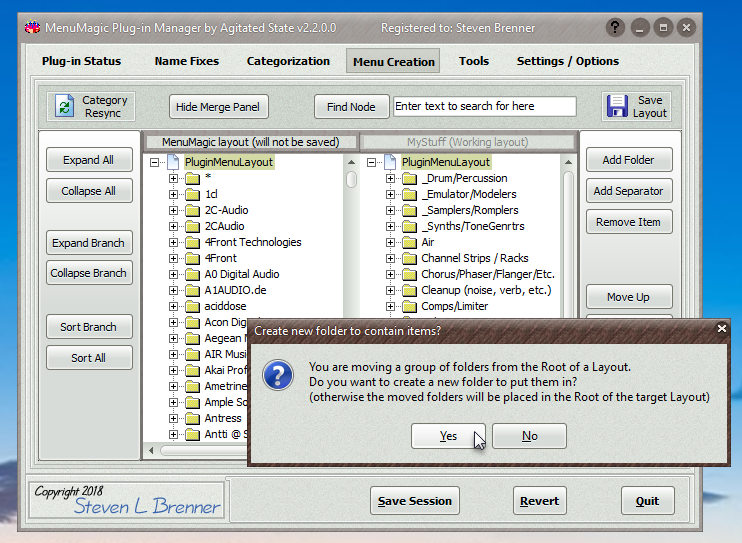 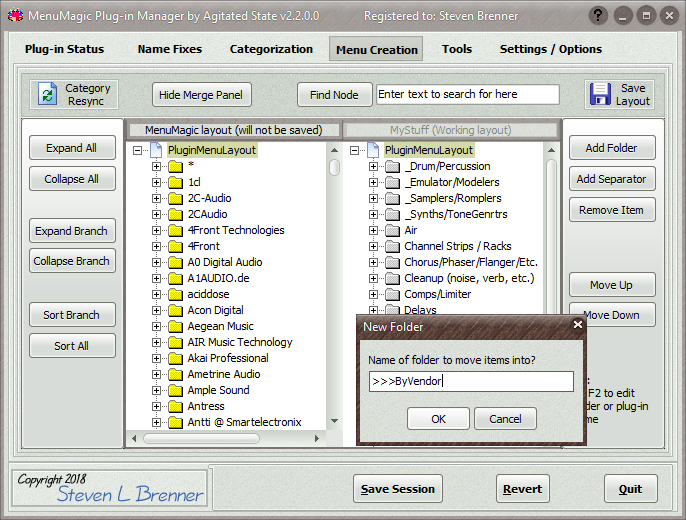 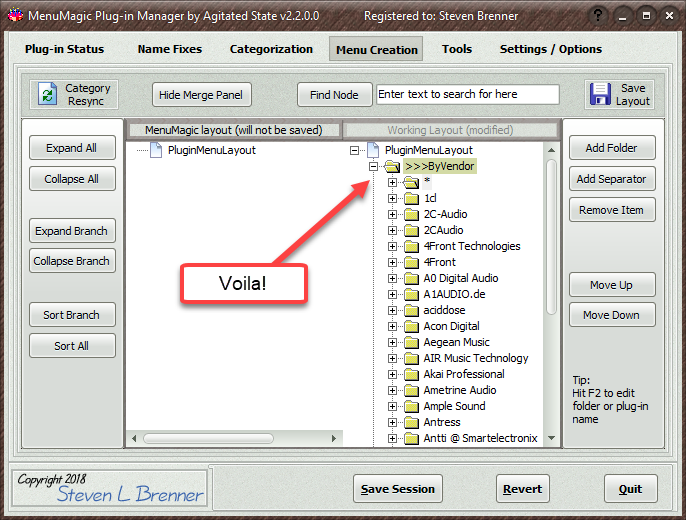 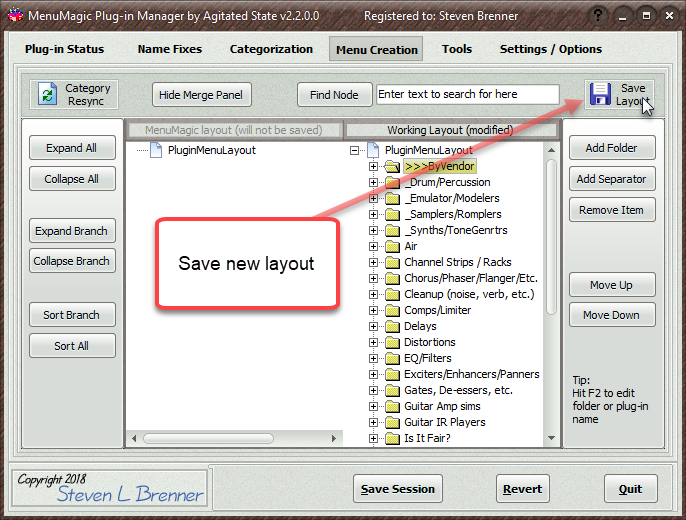 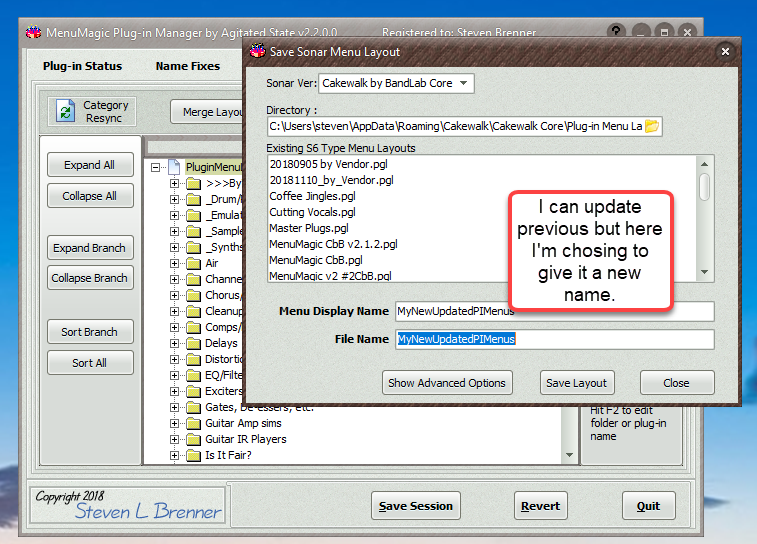 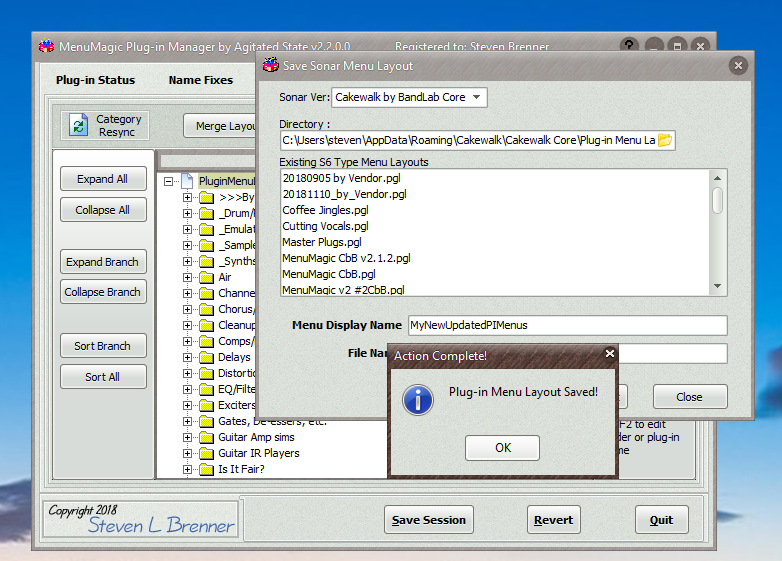 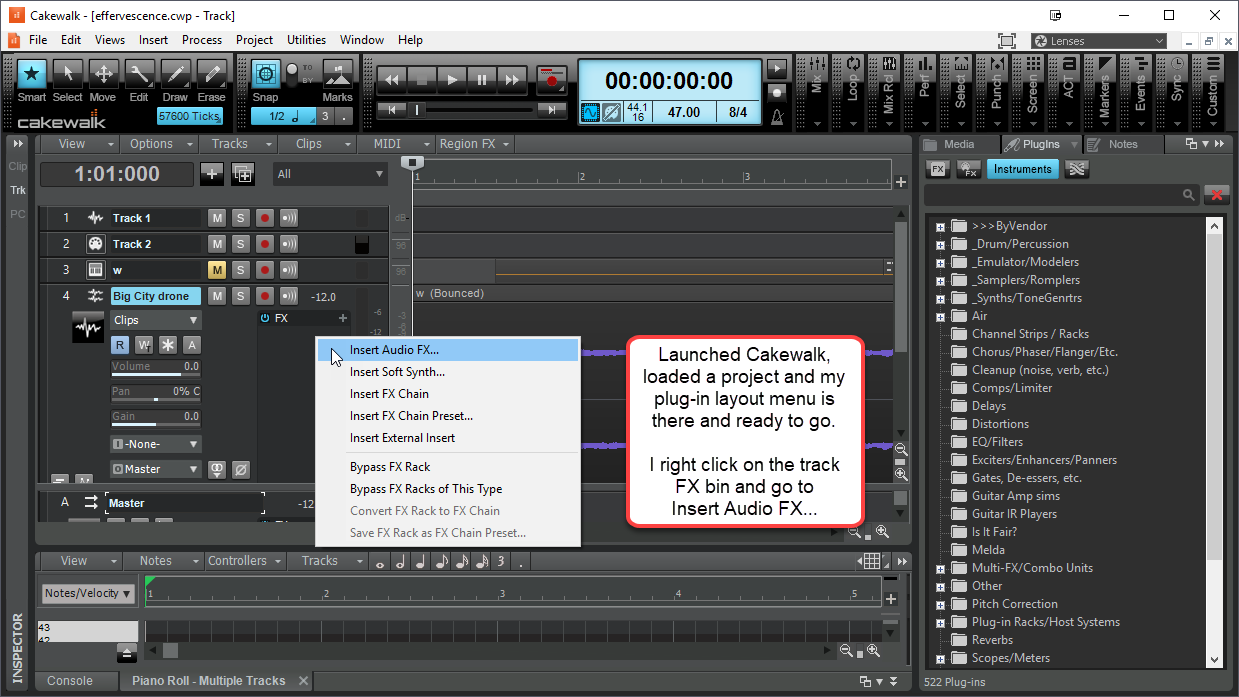 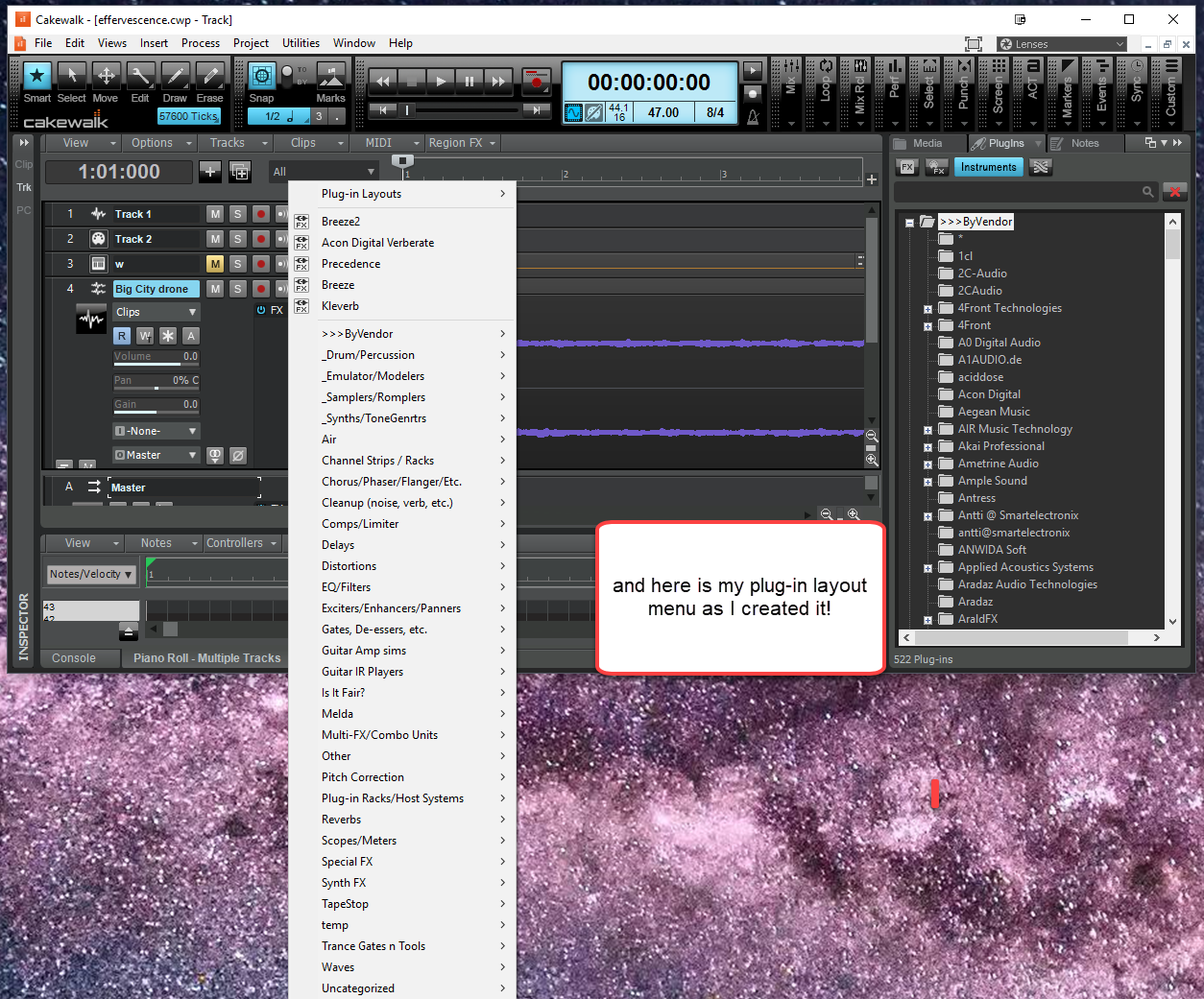 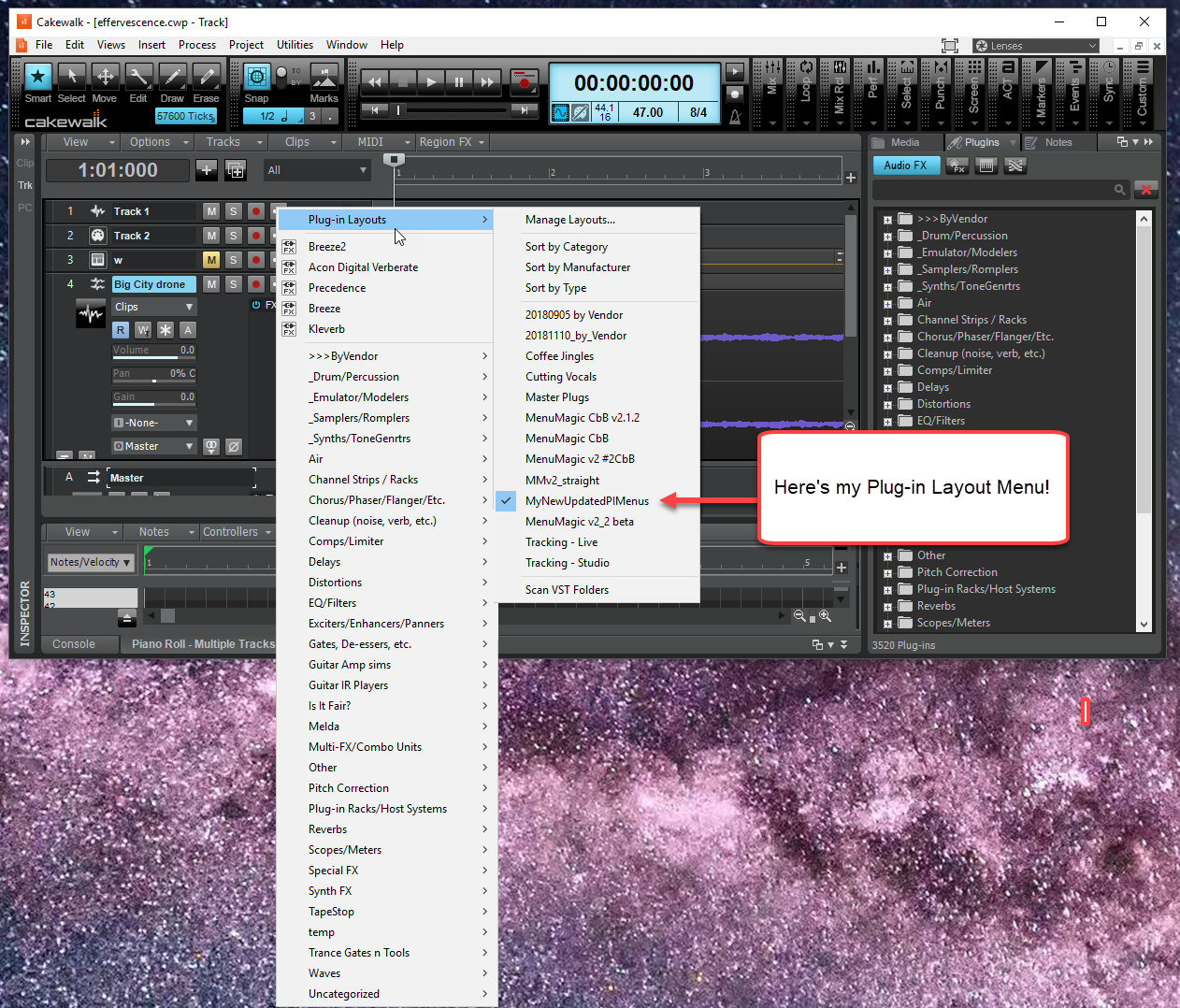 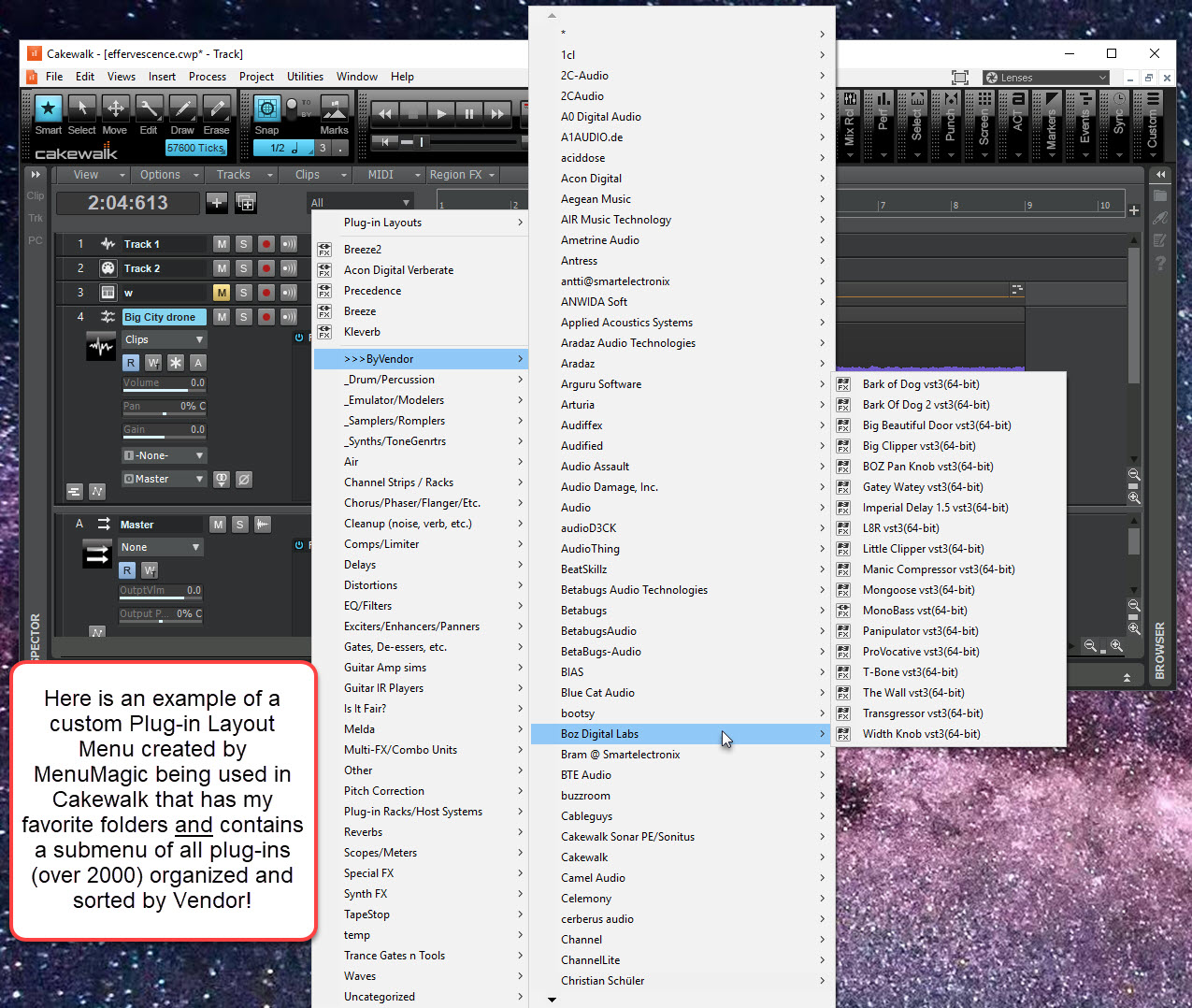 ★ MenuMagic v2.3.1 has been released!
This update is free to registered users – use your personal download link to download your copy of the new v2 MenuMagic.
This is a recommended update. Bug fixes and improvements should improve your MenuMagic experience.

While this release isn’t as ‘big’ as the previous v2.2 release it does contain important bug fixes and some new features.

Notable Changes:
Categorization tab
• Fixed issue with GUI where in some cases the status of Move buttons (>,>>,<,<<) were not being properly refreshed (would become disabled).

Menu Creation tab
• Fixed bug that could affect UnCategorized plugins and only affected plugin that shared the same VST file (such as Waves) and also possibly some DX plugins.
Instead of having let’s say 4 versions of a plugin (for example mono, mono live, stereo, stereo live) you would end up with 4 copies of the first one hit as shown here:

As mentioned this issue only affected certain plugins if they were UnCategorized and it has been fixed. 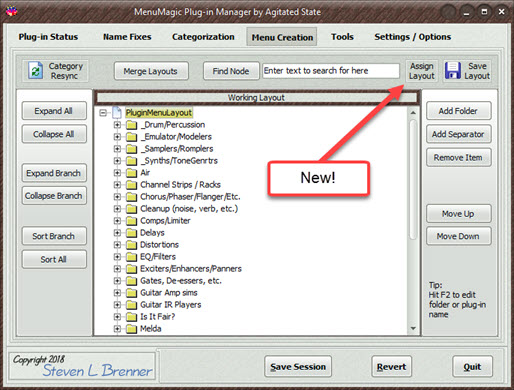 • In Save Layout or Assign Layout- selecting an Effect bin, now selects all Effect bins. Same for Instruments.
This behavior matches that of Sonar Platinum and CbB.

Many other tweaks, bug fixes, etc.

Known Issues:
• Built in Help documentation does not contain information related to this release.
Sorry but new changes in v2.2, v2.31 and planned changes in the next release will require that most of the screen shots have to be redone.
Will catch up after next release.


Now for a limited time you can pickup MenuMagic for only $XX.XX!
and it comes with a 15 day money back guarantee. Click here for more information.

Buy now and you will receive BOTH the versions of MenuMagic.
V2 - supports Cakewalk for BandLab and Sonar (from last release back to v6.02)
V1 - supports older versions of Cakewalk DAWs that use the VST Adapter like Project 5 v2, Sonar5, etc.

More info on MenuMagic is available on our KVRaudio forum

Click here to get your copy of MenuMagic now!

Thank you for your continued work on this, Steven!

And for Sonar or Cakewalk by Bandlab users considering purchasing this, the ability to back up the Windows Registry keys related to your installed VSTs is worth the price alone. That feature has saved me a couple of times when hard drive issues scrambled parts of my Windows Registry or my VST folders.

This tool also helps you categorize your plug-ins by vendor, type or other criteria, and can identify plug-ins that may cause problems or are reporting themselves incorrectly to Windows.

Steve
Here's some of my stuff: https://soundcloud.com/shadowsoflife. If you hear something you like, I'm looking for collaborators.
Top

MenuMagic v3 is out! Click here for MMv3 info!