Strange that Korg hasn't made plugin manuals for MS20/Polysix/Arp. (I'm fine with the original hardware ones, but still)
http://soundcloud.com/tt_cc
http://www.youtube.com/user/TCMM11
Top

Triton is a sampler/workstation..but the in the software version all the sampler part has not been implemented. I hope korg will provide as soon as possible to insert the possibility to use user samples and multisamples
Benis67 http://www.benis.it
Top

They didn't leave out multitimbrality in M1 or Triton, they wouldn't leave it out in Z1 either then.

f**k no. Roland Cloud is an abomination.
Top

PPG WAve and Korg DW don't use samples. They use wavetables where there are some waves stored. PPG wavetables were createe using some sort of additive synthesis (no samples involved). The DW waveforms (just 16, use something of the kind (single period waveforms), although many of them come from sample analysis (kind of). The Prophet VS I'm not sure, but I think it uses something close to PPG Wave.

In their core they all actually use samples (digitally sampled waveforms) just extremely short. But what happens to those samples afterwards is a different matter .
Last edited by toitoi on Fri Jul 30, 2021 3:13 pm, edited 1 time in total.

There is a nasty bug in the vst version of the prophecy ( win 10 user here )
Click on of the modulation slots shown in the picture , a pop will appear you can select a source but nothing will happen
Now the button has become totally irresponsive ( green )
This does not happen in the standalone version 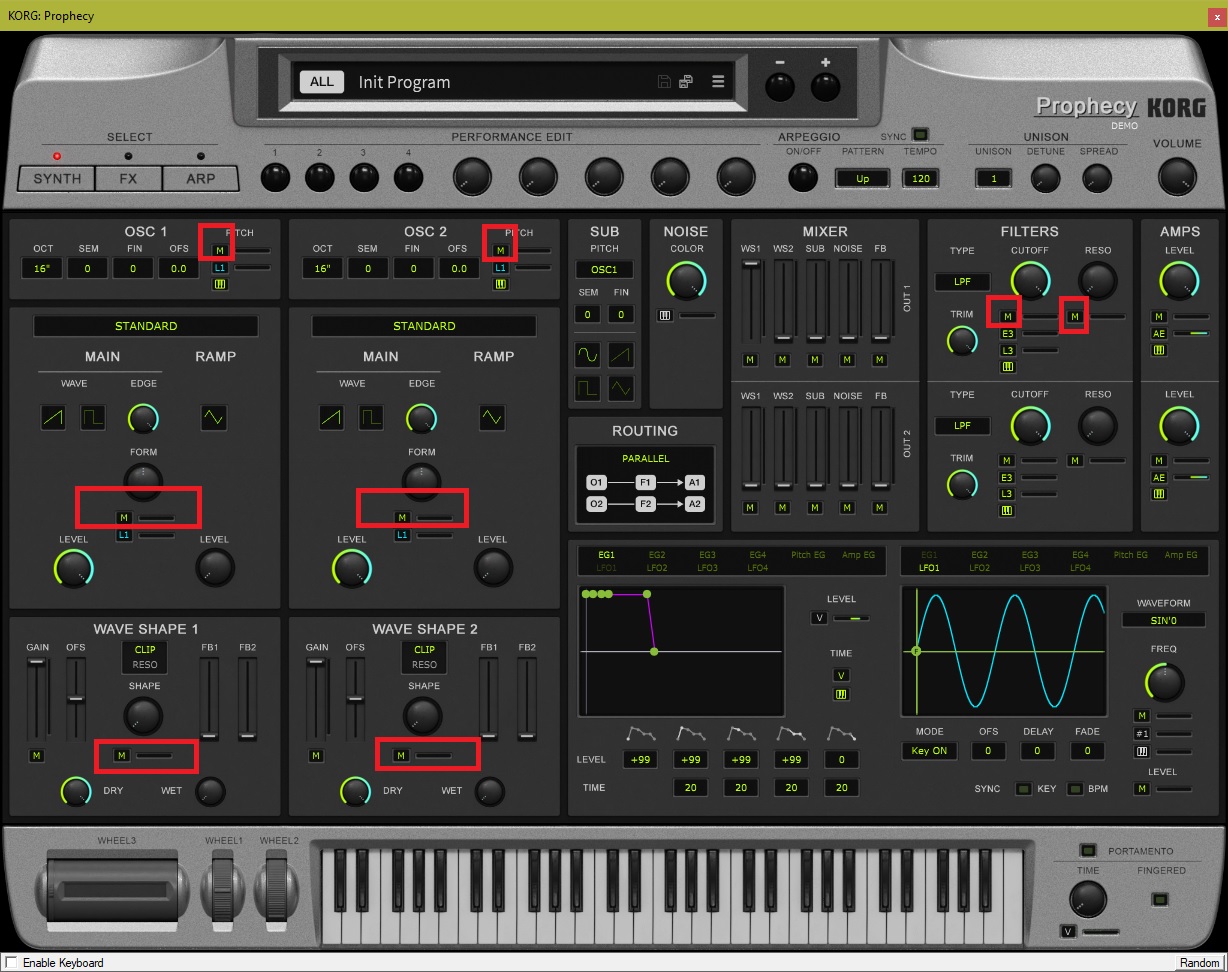 With of course the programs and performances of the original synths.

It would be a great thing if Korg released a version 3 update with these three machines in vst.

Better yet if not in three months.

Collection 3 would certainly sell much more.


Karma was just a cheaper edition of the Triton without the sampler, fewer ROM slots and a smaller screen. It has exactly the same expansion rom banks, presets and synthesis architecture. They also included the third party Karma software built in but this was more a demo mode than anything creatively useful so I cant see a reason for it to be released as a separate VST.

The Z1 was essentially a polyphonic Prophecy with a few extras and was available for the Triton as the MOSS expansion board which allows you to install all the original Z1 presets. Though to my ears it still sounds good and are quite sought after but was a typical 90s menu diver to program. They might possibly add this, but putting the Prophecy VST into polyphonic mode will get you most of what it could do.

I dont own an o1/wfd so cant comment on that.
Top

Not if you can do cross-modulation between the oscillators. That definitely takes it out of the realm of a sample playback machine. I can't believe this is even a discussion, it's a f**king ROMpler and that's what a ROMpler is. Everyone knows this and has always known it. Honestly, the only difference between an M1 and a proper sampler like an ASR-10 is that the ASR-10 had volatile sample memory so you had to load the samples into it, where the M1's samples were already pre-loaded into a ROM.

If you want to make a distinction in your head, try this - with a proper synth, if you want to make a piano patch, you don't start with a piano sound, do you? No, you start with a simple waveform and try to coax a piano sound out of it. OTOH, if you want to make a piano patch in an M1, you search through the ROM for a piano multisample as a starting point. 99% of the work is already done for you because it is playing back a sampled piano and all you need to do is adjust for taste. You'll never be able to turn that piano into a sustained pad, no matter how much you tweak the envelopes or compress it, it will always be some variation of a piano.

They all use sampled waveforms for the oscillators. M1 has usual suspects single cycle waveforms and DWGS from Korg DW8000.

But no resonant filter, so good luck doing anything useful with the DWGS waveforms. The DW's weren't famous for DWGS, they were famous for their great analogue filter and massive unison. DWGS was a curiosity, really, a step on the way to a full ROMpler.

Right and O1/w series was no better. Those are all filter controls you got.

But you had the waveshaping, which made up for it. Listen to this, both the fast synths are O1/W with velocity modulated waveshaping - https://deathlyquiet1.bandcamp.com/track/drdeath The first sound you hear is a single patch on a single channel, not two layers. The bass is a slap bass patch, and I think the guitarry things is probably ASR10, but the rest is AI2 waveshaping in all its glory. Skip to the end to hear the other waveshaped sounds a bit better in the outro. Yes, those "filter sweeps" are actually waveshaper sweeps. The O1/W was a pretty cool beast.

it's no worse than the original

My point, precisely. Things have moved on, we don't have to deal with highly compressed ROMs any more, which makes these things sound very ordinary today, even against the Triton ROMs, and definitely against even freebie Kontakt instruments. The M1 only had a 4MB ROM. That's 4 MEGABYTES! You could fit that into my laptop's RAM 8,000 times! OTOH, most of my Kontakt instruments are too big to fit into RAM all at once and none of them are trying to cover more than one or two different kinds of sounds/instrument. Nostalgia is totally misplaced when it comes to things like the M1.

When I bought my M1, I was conscious of the fact that it didn't sound as good as the ESQ-M it replaced but I thought the tradeoff in having all the workstation features was worth it. However, after I'd replaced it with an 01R/W, I realised that it had been a mistake and had held me back for several years. Live and learn.
Last edited by BONES on Fri Jul 30, 2021 10:32 pm, edited 1 time in total.
NOVAkILL : Zenbook Duo, Core i7, 16GB RAM, Win10(64), Evo8 | Studio One | JP6K, Union, Hexeract, bx_oberhausen, Odyssey, TRK-01, Vacuum Pro, Invader, Concept, GR-8, Thorn, Equator, VG Iron 2 | Uno Pro Desktop, Uno, Rocket.
Top

And I'm glad that I did. I've never owned a hardware Prophecy, though I did want one at the time when it was first released, but now I can finally at least own the software version.

I've never been a big fan of the Triton or Triton extreme, as I've always associated them with a type of music that is not my style, but I guess I'm glad to have them too, and I will be exploring them eventually.

The Mini Korg 700 is a nice surprise and I've only tried it for a little bit so far, but I'm finding that I like that one quite a lot. I also like how you can choose between the 2D modern interface and the 3D vintage interface. The 2D interface looks great and is one of the best modern UI adaptations of a vintage synth in my opinion. I guess I like simple and easy to use things.

There are still a few more that I haven't gotten a chance to play with like the ARP. All in all, a great collection that I'm happy to have.
Top

The MS20 and Polysix manuals are inside the Legacy Cell manual available here:

Some oscillator models are missing and 6 part multitimbrality.

Ah, also now read that the Z1 also has different algorithms. So a Z1 version, or better "Prophecy extended" version would be dope.

Btw. I also like the prophecy GUI more than Trition. The triton one is very slow on any scaling other than 100% here, like 10 fps. The Prophecy GUI works nicely with 60Hz.
Top

gentleclockdivider wrote: ↑
Fri Jul 30, 2021 2:59 pm
There is a nasty bug in the vst version of the prophecy ( win 10 user here )
Click on of the modulation slots shown in the picture , a pop will appear you can select a source but nothing will happen
Now the button has become totally irresponsive ( green )
This does not happen in the standalone version

Reproduced here as well. Thanks for the report. How do we tell KORG? Do they have representation here?
Soundcloud | YouTube
Top

Progress...
After the updates basically reset themselves in a way that my DAWs wouldn't add to a track, I finally figured out I had to build a new folder manually from the scan path. So all is good on Cubase and Mixbus. Though I haven't got to doing Cakewalk yet. I decided to load the whole collection again and forgot that Odyssey in the previous stand alone version crashed when changing the driver to ASIO and the new version still does it too. So I sent Korg a report and included the fact that Prophecy and MiniKorg don't even have the ASIO option in them. All work in the DAW though, so I'm finally getting the presence in sound the other drivers sacrifice.

The MiniKorg is really nice.
Nice enough that my nostalgia might close me on the whole update.

But the manager now sees some of them as not downloaded or installed.
Top

Another question: All the older plugins have been updated (except for the Legacy Cell); does Korg hide a changelog somewhere?
http://soundcloud.com/tt_cc
http://www.youtube.com/user/TCMM11
Top

PPG WAve and Korg DW don't use samples. They use wavetables where there are some waves stored. PPG wavetables were createe using some sort of additive synthesis (no samples involved). The DW waveforms (just 16, use something of the kind (single period waveforms), although many of them come from sample analysis (kind of). The Prophet VS I'm not sure, but I think it uses something close to PPG Wave.

In their core they all actually use samples (digitally sampled waveforms) just extremely short. But what happens to those samples afterwards is a different matter .

Well, if you want to go down that route (digitally sampled waveforms), then the Yamaha DX7 is also a sample based synth, because the sine wave is stored digitally in memory. The same can be said of any other FM synth, and possibly any other digital synth, like any Roland synth from the D-50 onwards (since none of them creates the waveforms electrically), including things like the JP-8000.
Fernando (FMR)
Top

So I only have M1 and Wavestation for the PC. Does that mean my upgrade cost to Collection v3 is $299 or is there some other offer I can make use of?

What's New @ KVR Audio
Latest Forum Posts (Customize)
JP-8080 Love & Some Trance Classic'sby commodore @ 15:41 in Hardware (Instruments and Effects)MBassador vs bx_Subsynthby sokoleski @ 15:40 in EffectsWhat is the best "Closed-Back Studio Reference Headphones"?by andymcbain @ 15:40 in Getting Started (AKA What is the best...?)"Mastering grade oversampling"?by Zaphod (giancarlo) @ 15:40 in DSP and Plug-in DevelopmentPlogue OPS7 (bit-accurate DX7 emulation!)by tristan- @ 15:38 in InstrumentsFavorite Default Synth Patch?by itanever @ 15:36 in InstrumentsRecording Studio for Sound Designby LocalTrack19 @ 15:36 in Hardware (Instruments and Effects)You know how most companies have marketing slogans? Let's come up with ones for DAWs :)by vurt @ 15:34 in Hosts & Applications (Sequencers, DAWs, Audio Editors, etc.)Best VSTi for chromatic (synth) percussion?by Friendly Noise @ 15:31 in InstrumentsStudio One users... You staying or going?by wuworld @ 15:30 in Hosts & Applications (Sequencers, DAWs, Audio Editors, etc.)the not so clever band name threadby PatchAdamz @ 15:27 in Everything Else (Music related)baltic audio "Serum Essentials Vol 6 - Future House (64 Serum Presets, 51 MIDI Files)"by baltic audio @ 15:24 in SoundwareWhat are you listening to now? Look on my works, ye Mighty, and despair!by vurt @ 15:22 in Everything Else (Music related)Say something about the poster before you.by PatchAdamz @ 15:22 in Off Topic ClassicsNew: Lem Echo Music tape delay from Martinicby martinic @ 15:18 in EffectsView All Latest Posts