Not sure why they added the "P" but it's just an 11.
P11.png
sharp11.png
You do not have the required permissions to view the files attached to this post.
Top

Could the P be a natural? To show it's not a sharp or flat 11th?
https://soundcloud.com/main_tenant
Top

ThomasHelzle wrote: ↑
Sun Oct 24, 2021 3:36 am
I personally prefer it a lot when the basic structure stays the same, but on each Iteration you get variations (more or less drastic, following some settings) without losing the original theme or melody.

And in that realm, a musical, "intelligent" variator, which knows about the other tracks and keeps coherence would be quite interesting.

I remember Numerology had a similar option on one or two of it's sequencers. I am sure the mono sequencer had it but it's been a long time since I had my iMac and I can't quite remember the terminology used. Either way it would be nice to see someone else pick up that ball and take it further down the field. It was a feature I liked and used a lot.

In fact it was one of the mountains I thought I could climb with Loomer's Architect but I just haven't had the time to invest yet...
Top

Yeah, it seems such a natural thing to do...

Similar expectation here with Architect. While I did quite some work with it initially, it's way more tedious and counterintuitive for me to use on the node side than I'd have expected. I should probably just stay in LUA for most of the meat, but that partly defeats the purpose of using it...
It's almost 3 years now that I bought it and we still do not have real docs or the "300 examples" Colin once said he had made during development.
He sure is the most glacial developer I ever dealt with...

But also, my interest shifted over the time Architect was/is slowly tickled into existence.
When he first announced it (with a much smaller scope in that endless thread), I was very deeply into generative things and expected to do "everything" with it.
Now, what feels like a decade later, I still like generative tools, but the main thing I do musically is playing my EWI USB with Respiro and some Audio Modeling SWAM instruments, sometimes along generative tools, sometimes not.
And Bitwig made great strides in the generative realm itself.

So yeah, let's see if Architect will take off at one point.
But I think it's just as probable that somebody else will create something more fluid to use.
The Bespoke DAW was a very pleasant surprise in that realm recently and the next version, with most of the immediate problems fixed, should bring it into everybody's focus for real.

Tom
"Out beyond the ideas of wrongdoing and rightdoing, there is a field. I’ll meet you there." - Rumi
ScreenDream|Thomas Helzle

The main reason I like looking at different types of apps that generate midi is so I can see what other cool items I can add to my own Objective-C application that I have.
I've written several MIDIFX plug-ins since, while I like the Scripter in Logic, compiled code is always faster than scripting code.
That Loomer developer is still not done and not to sound mean, but he's not going to finish it.

As with all development of software, most people code as you go. Wrong thing to do.
System design is the most important thing. System design doesn't reference, code language, OS, etc...
It's a design of the flow and to try to figure out pitfalls of the flow.

The reason I like Logic Pro X Scripter is because it's a great prototype tool prior to writing the Objective-C code and to make sure it's going to work in Logic and so Logic can use any generated MIDI.
Top

In all likelihood a perfect, as opposed to a sharp (augmented) 11. There, F.
There isn't really a flat 11, that would be a major 10, ie, a major third, has no sense as a harmony part.
In a line one might write 'Gb Fb Eb Db C' or somewhat, because spelling, but that's about the size of b4 or b11.

C D F A however is really a Dm7 in third inversion "Dm/C".
Youtube
Top

^ thanks much for info
Isn't Fb just an E?
Top

On keyboards yes… If you get into just intonation no…
Top

thanks for tip
Top

Wotja 22 versions will be available for purchase/download Jan 1st 2022.

The paid-for version might be available for *pre-order* in the Apple App Store towards the end of December.

We expect we will run an early bird (discounted) price until Jan 7th.

I did a search on this thread but didn't find any matches for Metro by Sagan Technology which has Rhythm Explorer and Lead Generator algorythms both capable of generating very convincing instrumental MIDI parts for keys, guitars, drums, bass, orchestral etc:
https://www.sagantech.com/ 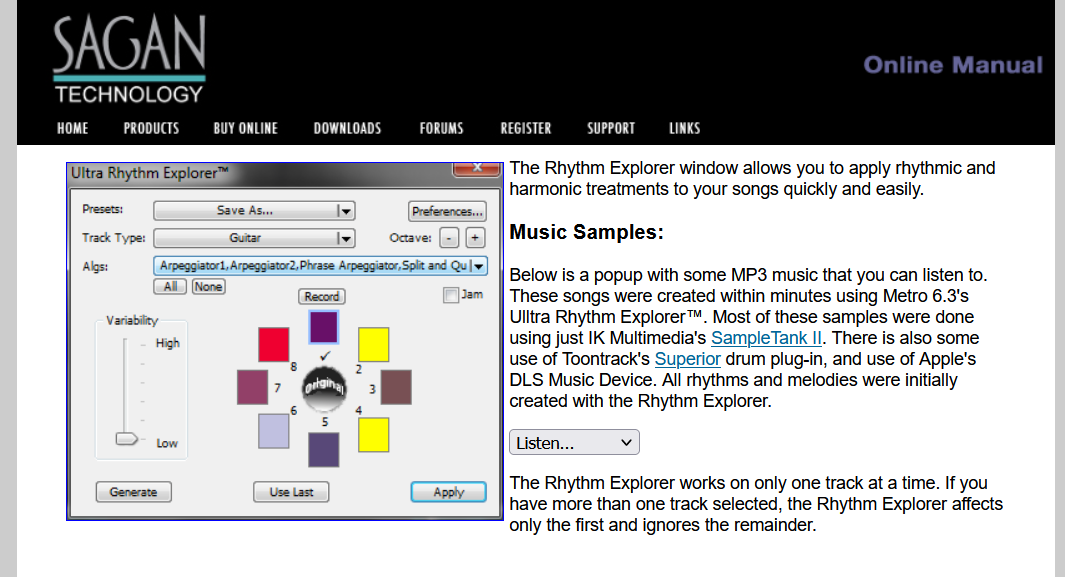 The tweakability and depth of the parameters you can drill down to appears practically limitless (and yes, it was coded by a relative of astrophysicist Carl Sagan - his brother I think)
Top

Looks interesting but it being a standalone application puts me off tbh
https://soundcloud.com/main_tenant
Top

You can just route the midi from Wotja into your DAW, works fine. I'm having a blast with it.
Top
1662 posts