Posted in the effects forum, but it won't hurt to see it here too - Version 2.0 has arrived! W00t!

Just one little request though - would it be possible to move the smart ops panel to the right hand side of the GUI? When the VST resizes to accomodate the panel, everything kind of jumps to the right, rather than the panel gracefully appearing on the other side. Probably more work than you need right now (*cough Catalina), but would appreciate it if you could put it on the to-do-some-day list.

Thanks Fabien and team, nice release

1. There is no bypass button in the DAW. In normal SlickEQ's changelog for v1.3.1 there is an update called "# Fixed VST3 soft bypass", so maybe the same fix is needed here? 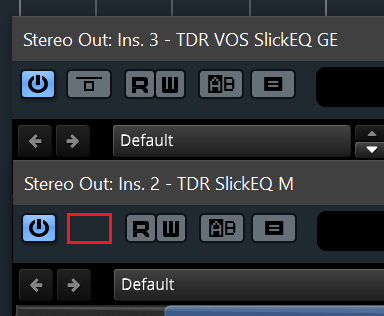 2. For SlickEQ non-M and M: in Cubase's HiDPI mode, closing and re-opening the GUI shrinks the window size every time until there is almost nothing to see left. I'm unsure if this is on the plug-in's side or the DAW's...

3. A minor issue for SlickEQ non-M and M: the edges of the plug-in show a resizeable mouse cursor when hovering over them, but the neither of the plugins are resizeable.
Top

Thanks! We've fixed 1. already in our codebase, still investigating into 2. and 3. (could be Cubase, could be our own code).

If you have time, pls rename the VST3 file (to hide it) so that the VST2 is being used. Let me know if it changes anything.
Fabien from Tokyo Dawn Records

Of course. The VST2 has none of the above issues.
Top

I've downloaded Slick EQ M 2.0.0 several times from my TDR customer profile but can't get it to install.

This is a 2012 MacBook Pro 9,1 running OSX 10.14.5
In System Preferences > Security & Privacy > General I have "Allow apps downloaded from App Store and identified developers" enabled. Usually there's an "Allow" button when I get this prompt for other developers' apps but not with Slick M 2.0.0

"(the .dmg) can't be opened because Apple cannot check it for malicious software.
This software needs to be updated. Contact the developer for more information.

Chrome downloaded this file today at 9:38 PM from store.tokyodawn.net."

We'll double check and likely fix Apple's "funny" mess. Apple forced us to rework our installers according to Catalina's demands, now they are forcing you to update your OS harrrr harrrrrr

All we can realistically guarantee is to fully support the second latest OS active to date. Sounds messy? "Think different!".

It's now been almost 2 months of work running behind this stuff, blocking our product development. Too bad I'm no Apple shareholders!

After trying about 5 or 6 more times I got Slick EQ M 2.0.0 installed.
Not sure what exactly did it, I had actually come across the same link you shared before posting here.

I can fully understand why you're considering charging more for Mac plugins!
Thanks.
OLOKUN - Survival Kit - now on iTunes, CDBaby, and Spotify