Interview with Daniel Haver and Stephan Schmitt of Native Instruments 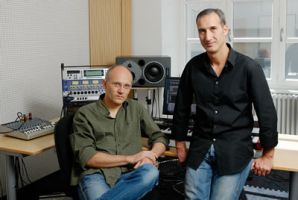 The founder of Native Instruments is Stephan Schmitt, who has been a pioneer in many ways. His background is electrical engineering, and he started his career in one of the earliest collaborations between East and West German entrepreneurs after the Berlin Wall fell in the early 90s, working on the first generation of digital mix consoles at that time. Stephan Schmitt is also serious music fan whose favorite is Frank Zappa, and an ex-performing Free Jazz keyboardist as well. Eventually he partnered up with software developer Volker Hinz to create the seminal music software "Generator", and to launch what was later to become the Native Instruments GmbH.

Bernd Roggendorf, who later founded Ableton, was one of the early Native Instruments members, and he pointed the company out to his friend Daniel Haver, who was both fascinated by the possibilities of software synthesis and a passionate fan of the electronic music that was being created in Berlin. At that time, he was running a graphics and web design studio that he eventually gave up in favor of the exciting perspectives of the emerging music software enterprise. With his strong marketing and business background, he set out to develop the living-room based endeavor into a full-featured company.

Tell us something about the history of Native Instruments? What was your first product?

I have always been fascinated with musical instruments and especially electronic musical instruments as a 'source of sounds'. When computer speeds exceeded 100 MHz with the first Pentium processor, I saw the potential that software could replicate hardware synthesizers, and that they could be developed by a small team.

Our first software was "Generator", a modular synthesizer, which later became "Reaktor" (pictured) and also a technological basis for the design of several other products. We first showed Generator at Musikmesse Frankfurt in 1996 and received lots of press. This in turn attracted some capable people who approached me about joining forces, and with whom we build up the foundations of the company.

I was introduced to the company after the initial launch of Generator. They were located in Berlin right next to the fast-growing techno music scene, and I was very excited about it because I have always been passionate about electronic music. I put a lot of energy into connecting us with the techno scene through various events and contests, and this was the beginning of a very deep affiliation of Native Instruments with electronic music artists.

We were guided by a desire for quality sounds regardless of the graphical form they would take, or musical genre they would serve. The next instrument that we created was the Pro-5, which was the first software emulation of a vintage hardware instrument. Later in in 1998 one of our engineers, Michael Kurz, suggested to model a vintage drawbar organ as the next intriguing challenge. The "B4 Organ" that came out of this in 1999 was very successful, so we decided to really reach out to musicians and producers beyond the electronic music scene.

NI was one of the key technology innovators during the growth of Techno and Dance music. What is the future of Dance music, and how has your company changed – if at all – to accommodate new styles and influences such as Hip Hop and Grunge?

Techno musicians were first to pick up our software in the nineties, but dance music production was never intended to be our sole company focus. But electronic music producers were most open-minded towards software and towards the innovativeness of Reaktor. Many other people were overwhelmed by such a modular instrument that basically could do anything.

What product do you think best represents the soul of your company? Why is that?.

It is very hard to point to one specific product. Many of our products are modular in some ways, with a wide range of possibilities. Our overall goal is to give people more freedom to go in their own sonic directions. Reaktor, Kore, Kontakt and Guitar Rig are all very good examples of this philosophy.

We believe in the idea that software should increase creativity, and not impose any creative limits through functional constraints. This means to give the user superior functionality and flexibility on the one hand, but it also means that usability – and specifically accessibility – plays a crucial role in our product design approach.

After a decade of great products what has been your most important contribution to the industry, and why?

On a larger scale, the most important thing that we did was probably to pioneer the idea of software instruments itself – it took a long time for people to understand the concept and its benefits, because it was a big change for how people produced music at that time. A major part of our efforts, and one of the biggest challenges, was to evangelize the idea itself, in addition to making the best products we could. In this regard, Daniel's marketing background was very important because people needed to be educated about the sonic possibilities that software could deliver.

Was there any one product that you think really announced your arrival in the industry as a force to be reckoned with? 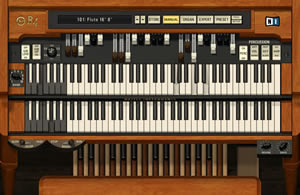 The B4 was probably the most important breakthrough – people like Stevie Wonder visited our booth at the NAMM show and were blown away by the product, and it built from there.

One thing that has consistently differentiated NI is its strong branding and stylish marketing. What are the models upon which you have created your marketing style?.

The brand and visual identity of Native Instruments had to be strong - to build up trust for this very new technology, we had to be clear and consistent in everything we did. Our communication had to be as sophisticated as our instruments, and this not only included the marketing, but also the GUI design which had to convey the innovative concept and unique potential of the products.

A few years ago you expanded your technology offerings into the DJ (with Traktor) and guitar area (with Guitar Rig). Why did you expand into these markets, and what challenges did you face to establish the same level of success you've enjoyed in the keyboard software realm?.

Since electronica and dance music is a passion of mine, the DJ scene was the next logical thing for us to reach out to. Mate Galic, who was one of the foremost European DJs at that time, joined the company in 1999. Mate and I shared the vision of bringing DJing onto the computer, and together we took the necessary steps forward, which eventually resulted in Traktor. Our approach for it was to be a professional tool, not a toy like some of the other software that was in available at the time.

I worked with lots of bands before I founded NI, and I have always been fascinated with guitars – people like Brian Monroney (Tom Jones Band) were already using Reaktor as a guitar processor.

Latency introduced by sound cards was obviously an obstacle for a long time, but when this became better, we knew it was about time to start "virtualizing" guitar equipment. Michael Kurz, our analog modeling expert, spent over a year on researching the theoretical basics of tube technology. Based on this he created our Dynamic Tube Response technology and the amp models for Guitar Rig.

Since guitar players are not as computer-oriented as keyboardists and producers, this was another product whose benefits had to be evangelized strongly to encourage people to make the move to software. We also decided for an all-in-one solution with a specifically designed foot pedal, so Guitar Rig was also our first combined hardware and software product.

What was the motivation to create KORE? What can you tell us about how KORE fits into your future product plans? 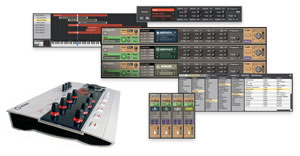 Kore was the result of many ideas and concepts that we basically gathered within a decade of developing software instruments. We put all of these ideas together, and at first we had a hard time ourselves to really understand the scope and the possibilities of what we had designed. Kore is definitely a product that was challenging for many, because of the new workflow and because it didn't fit in any of the established product categories on the market.

With Kore 2, we were able to improve and refine it considerably based on the input from its users. Kore 2 builds a lot on this feedback, including the full GUI redesign. With the integrated engines, and together with the free Kore Player version and the Kore Soundpack range that is already proving to be very successful, Kore now offers a level of integration that is even beyond what we originally envisioned. Kore definitely has a very central role both in our technological portfolio and in our product strategy.

You were one of the earliest supporters of Receptor. What did you see in the product that made you decide to support it?.

Receptor was a very logical addition to the market – rugged and fast to set up, the only serious entry for people who, for whatever reasons, do not want to use a laptop on stage.

Not every musician and producer likes to use a computer, so Receptor presents computer technology in a different way and gets rid of aspects that certain musicians don't need or don't appreciate.

Where do you see NI 10 years from now? How do you think the competitive and technology landscape will change over the next decade?.

In the past, it was about signal processing power; the technical capabilities are still growing rapidly while the computers get smaller and cheaper. I see the challenges now in the user interface – the communication between man and machine becomes more and more central to our design efforts. This might include touch screens, and other innovative peripheral devices. Our Kore controller with its touch-sensitive knobs and sound morphing features is a good example for this.

We are still very serious about our company slogan, which says that Native Instruments is all about "The Future of Sound". New, inspiring sounds as well as innovative musical instruments and tools are still what we strive for. We will also continue to make sounds easier to access and to integrate into any musical context.

Our bigger picture today is the design of complete solutions for musicians, software-based and utilizing the full power of today's computers, complemented by specially designed hardware wherever necessary. Ultimately, whatever we do, sound will always be at the heart of it.