B4
by Native Instruments

B4 by Native Instruments is a Virtual Instrument Audio Plugin. It functions as a VST Plugin, an Audio Units Plugin, a DirectX Plugin and an RTAS Plugin. 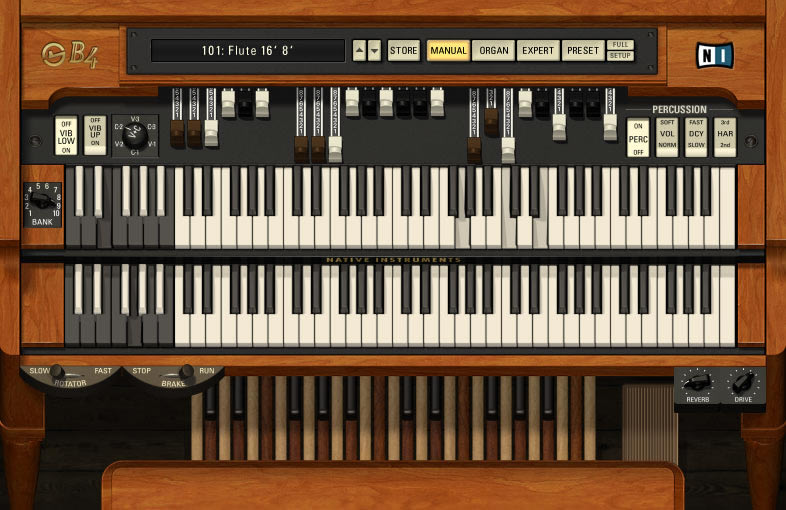 B4 is an emulation of the Hammond B3.

My one and only B3/122 Leslie came from a local restaurant. The original owner had 3 B3’s around the country and decided to sell this one for $1400 (this was in 1968). It’s long since been sold to a recording studio and just recently replaced with a Hammond-Suzuki XK System/Motion Sound Pro-145. Not quite as good, but still a great sounding combo; good enough to fool the ears of practically anyone. I purchased the Native Instruments B4 a few years before purchasing the XK System. This review is for the B4, not the B4II.

GUI: The interface is very nice. You get to choose between a top-down view of a Hammond B3 or a controller-only view with the drawbars, rocker switches and other controls for microphone distance, overdrive, etc.

Sound: With nothing to compare it to, I thought the B4 could imitate the sound of a B3 almost perfectly. The first clue that this isn’t so came when I was jamming with some friends and found that the sound couldn’t cut through the sound of the band, even though they weren’t really that loud. I was using a Roland KC-100 amplifier and the bottom end was very weak. The second time was when I recently did an A-B comparison between my XK System and the B4 playing through an Onkyo 100w amplifier pushing a pair of JBL 4311 studio monitors. The sound of the B4 was much thinner (I play several other instruments through this system, including a DSI Poly Evolver, a Univox Mini-Korg synthesizer and an M400 Mellotron, and they all sound great; plenty of lows, mids and hi’s). I haven’t tried playing it through my MS Pro-145. Still, the B4 sounds better than any other VSTi I’ve tried. The Leslie simulation is very good, as is the overdrive.

Features: The B4 has all the features of a Hammond B3, including bass pedals, V1-3 and C1-3 vibrato, braked, chorale and fast Leslie, overdrive, adjustable microphone distance, and several add-on tonewheel sets. However, the Vox and Farfisa sounds are nothing like the real thing. It can be used as a standalone or as a VSTi. The authentication is very annoying though. Every couple of months I get a prompt to insert the installation CD. I’ve heard that NI has changed the authentication process with the B4II.

Docs: The manual seems to cover everything you may need to know about installation and usage. If you’ve ever played a B3 or similar Hammond, you can probably figure out how to use the B4 without the manual.

Presets: There are scores of very nice presets, but the enjoyment, as with a real Hammond, is in using the drawbars to shape the sound. This has been a pain in the rear, having to drag the drawbars with a mouse. Fortunately, NI has come out with the B4D Drawbar Controller, which makes using the B4 a little more like the real thing. And several midi controller manufacturers are now marketing keyboards with sliders that can be used to move the drawbars.

Support: I’ve never had to use NI’s support, so I’ll assume it’s as good as their products generally are.

VFM: I purchased the B4 when it first came out. It was a fairly priced piece of software then and I think it still is.

Stability: I haven’t had any problems with the B4 as a VSTi, but it has had problems in standalone mode. After releasing a key, the sound would sometimes continue until the same key was pressed again. This hasn’t been a major concern though, as I prefer to use it as a VSTi.

For computer recording, I think the B4 is more than adequate, but I don’t think it stands up to live performance.Read more

My comments on the new B4II. Comparing it to the original B4, the most significant change is a much improved tube overdrive. A tonewheel leakage effect has been added, too, and the Leslie effect now offers a dual Leslie simulation and rotors stopped (brake). The Leslie sim is still not perfect but it's definitely better. It has a fuller low end which is closer to the real thing, and a couple of Leslie cabinet variations. Personally I have not use for guitar cab simulations on a B3 clone, nor do I need Harmonium samples, but they are there too.

The original B4 has a great Hammond model including a very good scanner chorus/vibrato. That part seems to sound exactly the same, just with a new look and a few more 'features'. You can tweak the look to be closer to a real B3. I don't care. It's the sound that matters to me.

I own a real Hammond B3 and Leslie too. Comparing the B4II to the B3 and Leslie, the Hammond part can sound very close to my B3, as good as any Hammond Clone keyboard. The Leslie sim is good, and better now with vII, but there is more room for improvement here. Nonetheless, the improved overdrive and Leslie effects were what got me to purchase the upgrade.

BTW I found the upgrade for $75 from a legit dealer on eBay.

B4 is a main part of my sound. I have been using it for years now and was first introduced to it while working for Mars Music, I fell in love then. I'm just a rocker, a little synth sometimes but I mostly just use guitar, B4, bass, drums and vox. I really can't say enough good things about it.

I sold many Hammonds during my time in retail, including B3's, E series, I was able to really mess about with the real thing often, this is as close as it gets.

I use mine with a controller so I have full control over all the parameters and though my controller only has eight slides I am able to invert them and I use one knob to control the last drawbar (or first one to be precise (16'). I use three banks and can link to all the settings in the control view, including presets. Because a B3 is without a pitch shift I map the swell pedal to the pitch control on my board and of course the rotator to the mod.

This is certainly one piece of gear I would not want go with out, like my favorite strat it's part of my musical family. Or perhaps my virtual band. If you want a hammond this is how to get it.Read more

First, I own two vintage Hammonds.

NI's B-4 originally came out as a standalone software B-3, along with VSTI and DXI support. It's a bit old - I've had it since 2001 or so, but it's still one of the best B-3 emulations.

User interface: There are two views: The "keyboard" view, IMHO, is too large and tries too hard to "look like a Hammond" (do we need animated manuals and pedals?) The "control" view is well laid out, this view gives you access to many parameters to customize your sound. I usually use this view.

There are a few deviations from a standard B-3 (vibrato depth, percussion harmonic, number of pedal drawbars, percussion/ninth drawbar switching) that I consider enhancements/positives. On the other hand, the way the upper and lower presets are tied together (more below) is definitely un-Hammond-like.

Sound: This is close enough to the real thing that I'd give it a ten. You can customize your sound to match just about any B-3 you've heard - clean tonewheels, overdriven Leslie, lots of keyclick, etc.

Features: To a degree it's a one-trick pony, but a well-trained one. The (optional) extra tonewheels set gives you Vox, Farfisa, and harmonium sounds as well. It can be used as a VST effect. The standalone version has an internal MIDI player. Keyboard split is an alternative to using multiple inputs or MIDI channels.

The drawbars and settings can be controlled via MIDI, but the CC's are fixed. If you want to invert sliders so they move the same way as drawbars, you have to do that in your host or with other software (MIDIOX for example, use 127-value).

Documentation: B-4 comes with a perfect-bound book in multiple languages. The manual is clear and well-written. After the initial read, I only referred to it for the MIDI chart. While there's some background information, they assume you're familiar with how to shape sounds with the drawbars.

Presets: B-4 comes with 120 presets. You can select them from the NI logo that shows 40 at a time, or via the twelve inverse keys in conjunction with a range selector. The presets are diverse, most sound good, and they're helpful for an inexperienced Hammond player.

The gotcha: selecting a preset from the upper manual changes the lower manual and pedals as well. You either make your own presets or set upper first, then lower preset or drawbars, then tweak the pedal drawbars. I tend to stick with the same 4-6 settings I use on my A-105.

Customer support: This is NI. The copy-protected CD is checked about once a month or so. Rumored updates from "people with contacts" have never happened. NI offers a forum to registered users.

VFM: Although I think it's a little pricer than it merits given its age, I think it's worth it. If I had to give up my A-105 or gig, I'd be comfortable doing so with the B-4. It's still the best and I'd pay full price again.

I have been using the B4 for a few years and have been pleased with it. However...seeing other Native products being updated (especailly Absynth) ...i would love to see this product updated... but to me the B4 is still the ultimate PLug in...and still with how old it is...still have not seen a comparison....NI ...love to see an update on 'tone wheel leakage', better chorusing on the 'leslie'...and more realistic tube distortion...Read more