I bet more than a few of you have thought of creating your own app. Small and mighty, apps have become the mainstay of mobile creation, ranging from ringing out an A440 for tuning to complete multi-track recording.

The folks over at EarthMoments have been working on a new app for over a year now that's sure to get some nods for great sound and innovation. It's an app called Rututu and it's aimed at getting the masses involved with making music using loops created from cool original samples the Earth Moments team has collected from all over the world.

Previously incorporated into the company's popular Zenpad libraries for Ableton Live, the Rututu sounds and loops in the app will be able to be manipulated using a unique custom-designed touch-based interface. Users will open a "playground" and drag "soundpads" onto locations on the surface. Each soundpad will offer loops and rhythms that play a variety of sounds that change depending on where they are placed in the playground. "Snapshots" of a setup can be saved and incorporated into the "trackbox" to create entire compositions. The sounds can also be manipulated using a variety of effects.

The app is currently in its final funding stage with a Kickstarter campaign set to end this month.

EarthMoments is a division of EarthSync, a world music record label, and producer of audio and visual productions that brings together traditional and contemporary music in unique, high quality productions. The development team, consisting of Kris Karra, Yoav Rosenthal, Yotam Agam and others, also has global roots. With members in India, the UK, Israel, the U.S. and (gasp) even Canada, the group has a finger on the pulse of global music making trends.

Here we sat down to get some insight into the app making process...

How long did it take you to make Rututu happen? 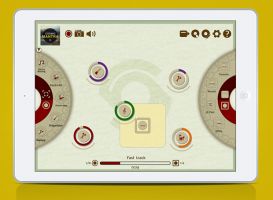 The idea of an app was on our minds for a couple of years. We had a few ideas and designs, some different concepts altogether. We're still not done.

What were some of your biggest challenges in creating the app?

I would say a big challenge is trying to relate the concept of the app. It was not your usual linear minded music app. It was more like a movie app but with sound instead of images.

Explain the process of where and how the sounds and loops were recorded. 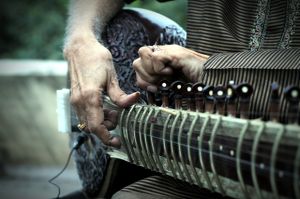 The sounds were recorded over the last 10 years, in studios and locations around the world, using high end Pre amps and Microphones. Each sound has a story behind its recording, either from the musician, the studio or the journey to discover it, the common thread is that it is definitely one language, one love.

EarthMoments' journey started 10 years ago during the making "Laya Project" documentary. This documentary film and album is a journey through small communities that were affected of the 2004 tsunami (such as Sri Lanka, Thailand, Indonesia, Maldives, Myanmar and India).

The production of this documentary revealed a new world of instruments and cultures to us, which inspired us to create 'EarthMoments, ' a boutique samples company that has an exotic signature to it.

We created this platform in order to offer professional musicians and producers access to an unknown world of sound and instruments, keeping in mind the needs of the modern musicians / music producers. In recent years, we expanded our library to include sounds from all over India, Indian Ocean, Middle East and Balkan countries.

Our team includes producers and engineers with over 20 years' experience, and our musicians are internationally acclaimed and top industry professionals.

Why is it important that these sounds are heard?

We believe in bringing people and culture together through music using modern tools. Some of the sounds that we are recording and editing are "dying" sounds. By bringing them to this universal platform we maintain them as part of the global village sound around the world.

Most producers and musicians don't have access to these kind of the instruments, mostly because they are not available outside of these sacred communities. Even for us it took a lot of research to locate the best musician or instrument.

Nowadays music people tend to use mostly digital sounds for different reasons. We think using this samples and loops can give another dimension to your production, and add some special touches that are rare these days.

Our goal is to make these sounds easy to access, and more important, easy to use, so you can easily add more flavors to your song.

You have these very traditional instrument sounds. How can the app be applied to modern music?

In this app we take the production process one step further. We wanted the musicians to be able to play these sounds immediately just by dragging and dropping them in the soundscape of the app. 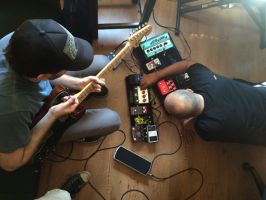 Any movement of the samples on the soundscape creates a musical change, just by moving the instruments icon over the screen you'll be able to create musical ideas and create different 'moods' any way you desire.

As we are still developing the idea, we feel this can take music making to another dimension, as you could now visualize the way your music will sound according to the location on the screen or according to what instruments are being played at the moment. So now you can have these very interesting and unique sounds in any genre — hip hop, EDM, rock or anything else.

Why have you launched a Kickstarter when it seems you have done so much already?

The wish list is long. There are so many little things that we want in there but there is always a limit on time and resources. The Kickstarter helps us not only finish the app but make it more complete.

To find out more about the app or contribute to their funding campaign, go to rututuapp.earthmoments.com

You can view their Kickstarter overview here: youtu.be/UHTotke20ec