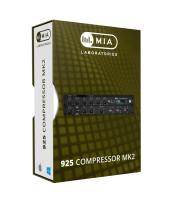 925 Compressor MkII is the second generation of our preferred main-mix compressor. This plugin – similarly to 409 Opto Compressor – is designed using physical modelling principles.

Its characteristic dynamic response stems from the sidechain detection stage, which is based on the basic analog envelope detector circuit.

The high speed of this compressor's detector allows it to follow the actual waveform instead of the envelope of the program material and -along with the Logarithmic gain reduction- produce more natural compression. This is often the case in hardware vintage and modern equipment, and has resulted in the 925s' broad range of compression characteristics. It is especially suited for main-mix applications but also buss-mix or multiple separate channels.

The specially developed 'Damping' control is also introduced in 925 MkII, which allows for smoothing and fine-tuning the detector's response, adding to the versatility of this tool and providing the user with greater control and shaping of the signal's envelope.

29 carefully tuned Presets provide a solid starting point for a variety of use cases. A host of new features has also been included in MkII, including Sidechain Filtering, Band Compression and Dry/Wet control.