925 Compressor by MIA Laboratories is a Virtual Effect Audio Plugin. It functions as a VST Plugin, an Audio Units Plugin, a VST 3 Plugin and an AAX Plugin. 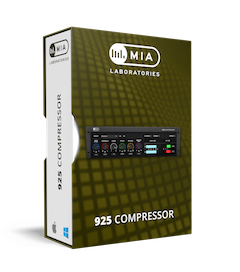 It is designed using physical modelling principles, based around the classic 'feed-back' topology in hardware circuit-design.

The 925 side-chain detection stage is based on the analog envelope detector circuit.

When used in extreme settings on sounds with long sustain, it can produce a distortion effect. This happens when due to the high speed of the detector, it follows the actual waveform instead of the envelope of the program material.

This is normal for such a design and in some cases desirable.

After a lot of consideration it was decided not to exclude setting range, as the process is very much program dependent. Instead the user is given full control, since even if some settings will not be suitable for a specific material, often they are perfect for a different situation.

This is often the case in hardware vintage and modern equipment, and has resulted in the 925s' very broad range of compression characteristics, esp. suited for main-mix applications but also buss-mix or multiple separate channels.