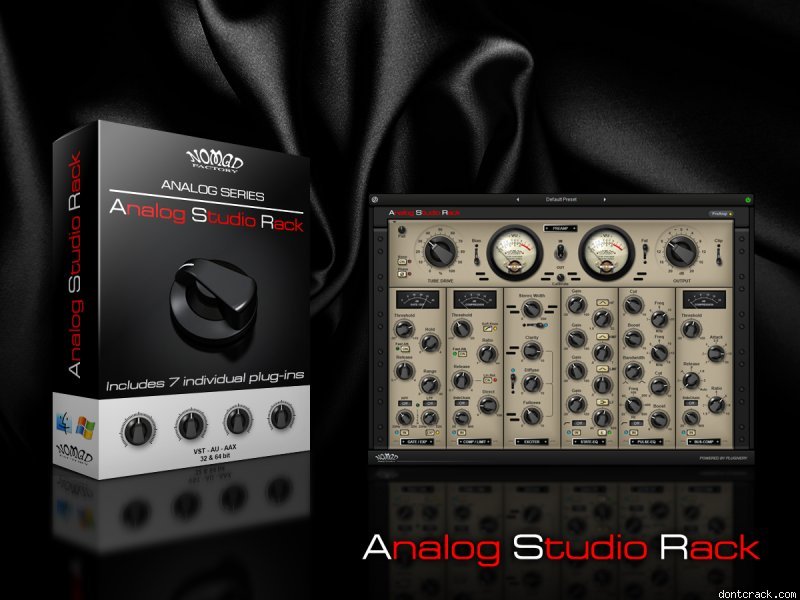 At this time Nomad Factory does not support Catalina, nor Big Sur.

Inspired by a classic and famous British console for its Gate/Expander, Comp/Limiter, Bus Compressor and EQ, a modified Exciter, a Tube Driven Pre-Amp and another famous mid 1950's EQ, the AS-Rack brings together a suite of 7 modules expertly tuned to sound musical. True analog in the box.

Each of the 6 main modules can be placed in any order with simple drag and drop, allowing you the freedom within a rack space design to try different combinations; Compressor before or after EQ, Gate after a crushed Compressor for effect... All of this is now possible to customize your tone and source material, with various views available per module for gain reduction, spectrum and 1/3 octave.

The plug-in comes with an array of presets specifically designed for various instruments as your starting point. Utilize them in your mixes, tweak, create your own as single module presets or global.

This is a review that comes a little late (it was released in 2016, I think) which means I'm going to be even more honest as Nomad Factory's "Analog Studio Rack" has to compete against the newest emulations out there.

This plugin is inspired by the SSL's famous channelstrip anatomy which, is quite obvious, however I wouldn't go as far as to call it a clone. It isn't, not only because it has its own character (even though it clearly has an SSL tone to it) but also because there are modules included that just don't resemble any SSL hardware.

I have to admit that after upgrading my computers I forgot about that particular one plugin (purchased 4 years ago). In the meantime I got Plugin Alliance's SSL clones and thought I'm as close to the real deal as I could get.

Then I watched a Youtube video that shocked me. A guy compared tracks printed through a real SSL 4KE with PA's SSL-plugin and while the EQ was quite accurate the dynamics were so different that one could barely recognize that brainworx intention was to model the actual SSL channel compressor. The real SSL had a saturated punch to it that got completely lost with the plugin.

This was the moment when I remembered Nomad Factory's ASR. I re-installed it, tried the compressor on a drum group and there it was: a saturated smack that made me grin like an idiot. Encouraged by the sound of the compressor I tried all the other modules and was stunned...how was it possible that I forgot that gem?

Gain staging is essential with this plugin; If you do you get rewarded with a wonderful "analog" sound. I even discovered something that I didn't realize back then when I had bought the plugin: Each module of the rack has a input and output gain knob. This is not just a digital volume knob. I inserted the pultec style EQ in my masterbus, cranked the input knob and brought the output down by the same amount. I noticed that the sound was a bit different but I wasn't sure if I was fooled by my expectations. So I printed two versions, one with the input and output set to unity, one with the cranked and compensated setting.Then I did a null test...And the difference was huge! The cranked version sounded much rounder and warmer, slightly compressed and credibly analog.

I also compared the brainworx SSL EQ with Nomad Factory's "state EQ" and again, it did hold up quite well. Sure, there were some subtle differences but to my ears they were subtle enough that I considered them neglectable. It was more like "ah, a module of another year of production" than "oh, that sounds like a completely different EQ"

The preamp module sounds fantastic on its own and is a great preparation stage for the signal before it runs through the rack modules. Also the VU meters are working smooth and are very useable.

Actually, this plugin is an absolute no-brainer, especially when it is on sale.

If Nomad Factory ever wants to update its GUI to a more modern looking one (foto-realistic? A public design contest would be cool) I'm sure it'll get the attention it deserves. Sound-wise it is second to none.

I like channel strips, so I thought that I would give this one a go, especially as you can insert each plugin individually....that's a bonus...

The same team that are involved in the ASR project were responsible for Bus Comp and that one's a winner...In fact it shares some of the same features and probably much of the same code...

In many ways, ASR represents the "best of" Nomad Factory's development over the years.

A bit of the valve stage, into an EQ, some channel comp, a touch of exciter and widening and then into the bus comp....very nice....

When you bypass the rack, you notice just how much those little subtleties add to the overall sound..

All in a single package with almost no CPU hit and zero latency...Impressive...

It's important to pay attention to the gain staging to get the most out of ASR and Bus Driver...

(In fact, proper gain staging is one of the crucial factors in making any mix sound good...).

Some "SSL purists" made some rather unkind comments about ASR when it was first released because they were unable to disassociate themselves from their elitist preconceptions...

It doesn't matter if is not exactly an SSL or a Pultec or whatever...

In the brave new world of digital coding, we've moved beyond the constraints of hardware...

All that really matters, is if something works or not and the ASR delivers the goods...

It's versatile, efficient and effective...

What more you need in your toolbox ?

Thanks for an inspiring plugin...It is really appreciated....