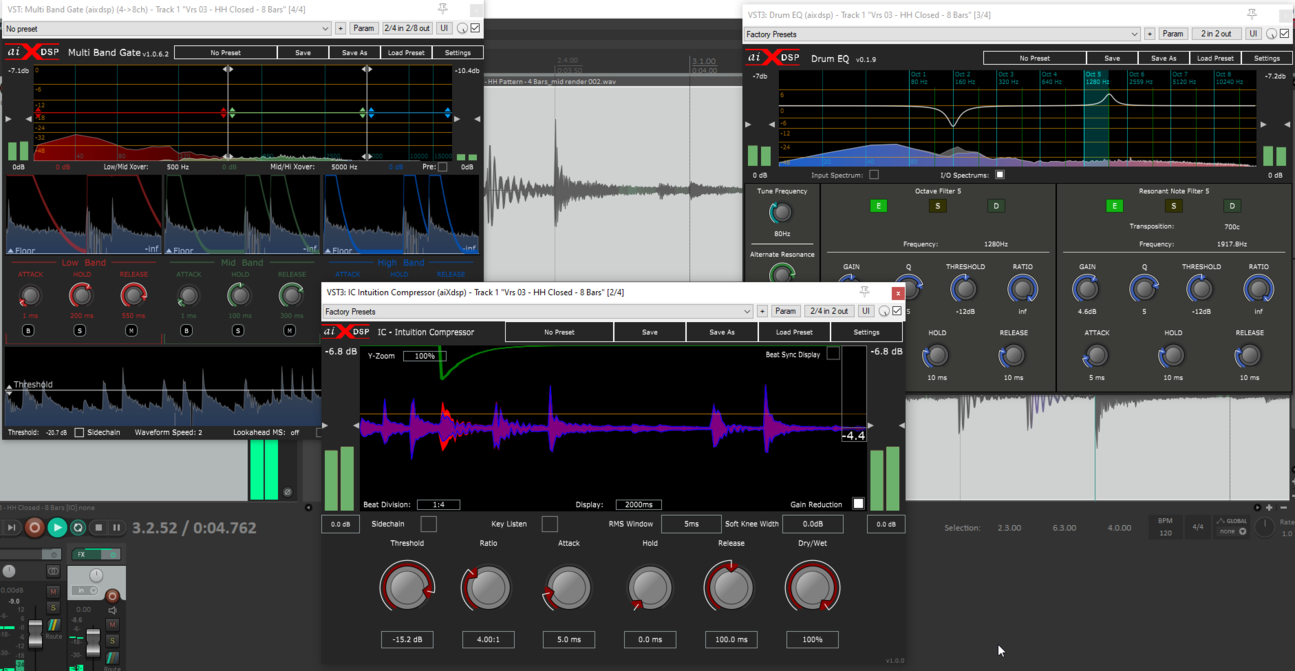 Our Multi Band Gate, DrumQ and Intuition Compressor bundled together at a discounted price.

Every part of every drum tells a story. Some parts are short and sweet, and if they overstay their welcome, you end up with a very different message than you originally meant to tell. Pure chatter. Some parts are very long winded, and you won't really know what they're talking about unless you give them a chance to speak their minds.
Traditional gates treat all of these parts the same, requiring a compromise and never really letting you narrate the way you'd like to.
MGB allows you to set the timing of each frequency band of a drum separately, for instance letting the lows of a tom ring out gloriously, while shutting off the high end quickly, giving you all the attack and "splat" you want without letting the cymbals ruin your mix.
The traditional way of doing this by chaining many gates and side chains is avoided in one, easy, convenient and informative package using MBG. In addition, each band can be mixed and processed separately so every band has its own particular enhancement(s) without messing up the others.

Set the detector to the proper frequency range of the drum in question Set the crossover points to zero in on the parts of the frequency spectrum you want to behave in particular ways. Remember, there is a mute control per band, and since so often, mixing is about crating space, you may be lowering or muting entire bands to really clean up a mix. Set the hold and release controls long enough to let the tones you want thru and short enough in other frequency ranges to shut the unwanted bleed off before it makes trouble.

Why not just low pass(or high pass, or otherwise EQ) the offensive section out? Lets take the holy grail of all rejection problems, the tom tom, played by an inexperienced drummer, who also happens to have his cymbals only a few inches away from them, AND has to bash the cymbals before, during and after that tom fill. An impossible task right? Time to just give up and trigger it... Wait, even THAT won't work as there is far too much hash in all that noise. You'll have to MIDI it in by hand or drop trigger pulses. Good thing you are being paid by the hour right? Oh wait, by song? Starting to rethink your poor career choices now? But wait, there's MBG:

1. Set the detector to the resonant peak of that tom.

2. Set the threshold to just open on the actual hits.

3. Solo the low band and use the hold and release times to give you the nice, long decay of boooooooooom as the tom rings out naturally.

4. Un-solo the low band and set the high band just long enough to give you the wet "splat" of the stick hit and then quickly shut it down before the cymbals start to ruin that tom sound.

5. Set the mid band to taste depending on how much space is in the mix and what exactly you want to do with it (again, in dense mixes, you might just mute this band!).

6. If you want even more control, use the separate outputs to, for instance, send the high band out to an exciter, the mid band out to a reverb and the low band out to a sub-harmonic synth.

DrumQ is a static/dynamic EQ who's frequency centers are set to octave multiples of the resonant frequency of the drum. A secondary, "Alternate Resonance" can also be added to subtly or drastically change the character of the drum as well.

How often when looking at old mixes, do you find that the cuts and boosts on your drum eq's are centered around multiples of the drum's resonant frequency? Perhaps this realization has led to you always keeping a calculator app open? At AIXDSP, we don't just want to get rid of unnecessary mouse-clicks, but unnecessary calculators as well! Loop a section of the drum in question and turn the "Tune Frequency" knob until the blue vertical line on the spectrum window lines up with the fundamental resonant frequency of the drum. You will see that all of the EQ frequency centers have now changed to octaves of that new "Tune Frequency". In many if not most cases, you will also see that the drum itself has some strong peaks or dips that those frequencies. Try cutting and boosting at these different octaves and rejoice in not having to fiddle around with calculators, fine tuning and direct entries just to get the frequencies right. Got it wrong? No problem, turning the "Tune Frequency" knob automatically adjusts all bands across all octaves! Set the "Alternate Resonance" knob above or below the fundamental frequency of the drum (think of this very much in terms of how you tune your tom's bottom head compared to the top head). Turning up or down these band gains can have a very strong impact on the "harshness" or "smoothness" of the drum sound in total. You may have long ago noticed a phenomenon whereby turning up the gain on octaves above the fundamental often sounds extremely similar to turning up the fundamental itself. This has two enormous uses:

You can definitely trick the ear into thinking that small speakers are putting out a LOT more lows because of this trick. Experiment with this sort of thing if you haven't before. Its amazing just how much low bass it feels like the sound has even through an iPhone speaker\.

Because of the property above, you can carve out space in a mix by moving what seems to be the resonant octave up an octave or so, the classic case of making room for the bass guitar by moving the kick up.

And all this is before we get into the compressor/expander on every band, including a hold control.

You have often seen an oscilloscope output showing an example of a snare drum waveform before and after a compressor. You've seen it in various academic papers, ads, articles, or even your recording school curriculum. It's amazing to see what affect dynamics processing is having on your signal! Unfortunately, as you have also seen, it's not so easy to use a virtual plugin O-scope to get this same information. It can have you questioning which calendar year you are in! AIXDSP brings you the Intuition Compressor - A compressor that peels back the layers of mystery surrounding dynamics processing. You will have a clear and intuitive visual display that shows exactly what is happening to your precious audio at all times.