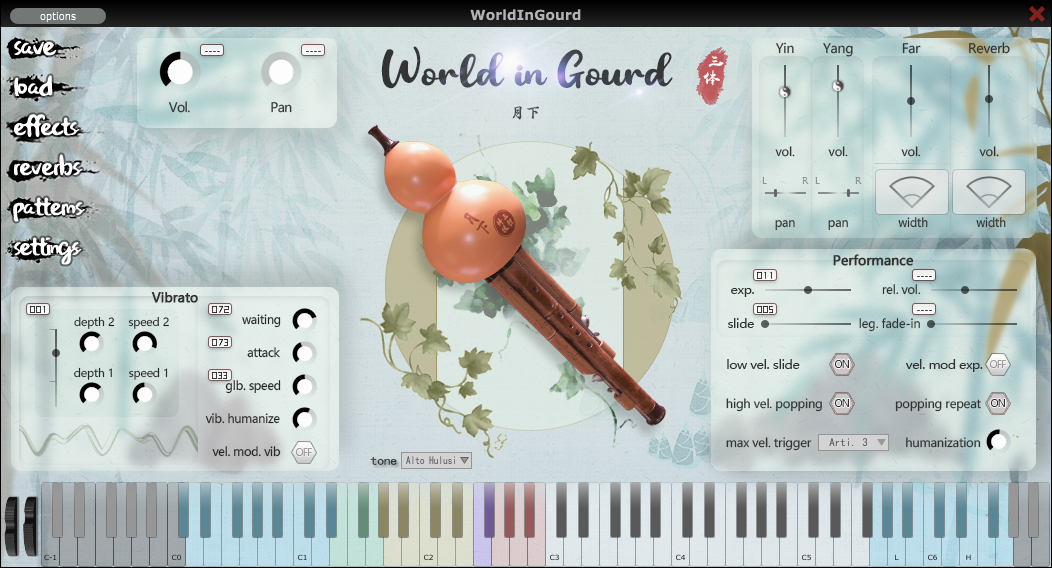 What is it?
HulusiThree-Body TechnologyWorld in Gourd
Format(s)
Operating System Availability
License & Installation Method
Voucher / Code for redemption on other website
What does this mean?
For related news items, downloads and more please see the full KVR product page for
World in Gourd

Hulusi is a clarinet-like instrument in southern China, and it is especially favored by Dai, Yi, and Miao ethnic minorities. It has a bamboo wind tube and gourd resonance chamber, with two auxiliary wind tubes play two fixed notes for harmonics. Due to the mellifluous and lovely sound of Hulusi, it is massively used to express romantic relationships and accompaniment for lyrical dance.

When samples were recorded, 5 different microphones were used with different positions to capture the spatial and reverb characteristics of Hulusi. All these channels were mixed down to four channels: Yin, Yang and far stereo. The volumes of these four channels were adjustable in software, making it possible to obtain most various tone:

By controlling airflow and finger, Hulusi has a very rich set of performances such as mordent, finger pole popping, trill, flutter, vibrato, staccato and gliss. All these performances can be triggered in World in Gourd software, making it most adjustable Hulusi virtual instrument:

World in Gourd has real-recorded expressions that are freely controllable. With the control of MIDI CC, it can express tone changes like a real Hulusi performance:

Real-sample-based LFO engine making World in Gourd performs vibrato that is both realistic and adjustable:

We recorded the sound between legato notes in two speeds, and apply them according to playing speed in software. In addition, we recorded "regular legato", "fast legato" and "popping legato" that are specific in Chinese Hulusi:

User can switch between bass, alto or treble Hulusi to have different tuning, where alto Hulusi sounds from the original samples:

Sounds from the two harmony tubes were recorded into triggerable samples:

At the beginning of Chinese Traditional series development, we started to record the convolution reverb samples from spectacular places, famous natural and historical heritages in China. Thus you can simulate World in Gourd being played at the Great Wall or Terracotta Army site:

Products similar to World in Gourd...