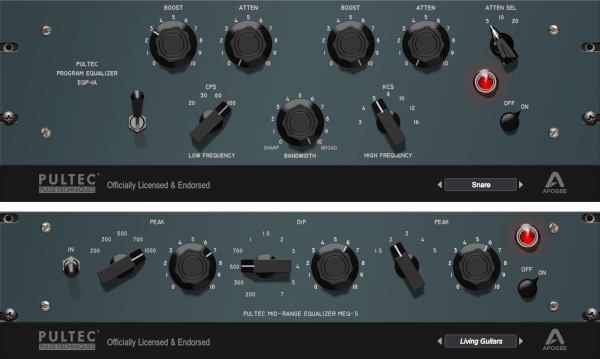 In our obsessive quest to reproduce every nuance of the Pultec Program Equalizer and Mid-range Equalizer, we had a worthy partner – Steve Jackson of Pulse Techniques, the current manufacturer of new Pultec hardware. During the 10 years Steve spent to recreate the legendary EQP-1A, he learned the intricate secrets of each component from the only person alive who knew them – Eugene Shenk, the original Pultec designer.

Legendary recording engineer Bob Clearmountain has used original Pultec EQs as an integral part of his mixing process since early days at New York's Power Station studio, so he was thrilled to audition Steve's re-creations. After careful listening, Bob determined that the new units were sonically identical to the originals. He uses new and original units interchangeably at Mix This, his Los Angeles-based studio.

After careful analysis of several vintage and new Pultec EQP-1A and MEQ-5 units, Apogee chose to model our plugin after Steve's new hardware – it was like unboxing brand new units in 1959.

We're proud that Apogee's software Pultecs are the only EQP-1A and MEQ-5 type plugins endorsed and fully licensed by Steve and Pulse Techniques.