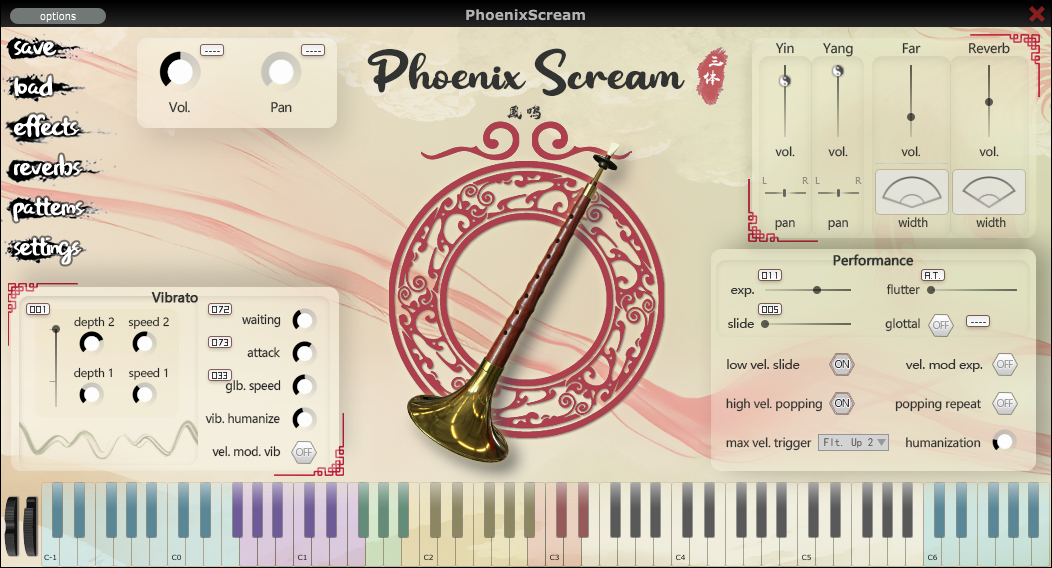 Suona is the Chinese variant of Surnay that originates from central Asia. It has a characteristic reed made of bulrush trunk, resulting in its featured metallic sound rich in high-frequency. Suona is highly expressive, especially for extreme delight or grief-stricken emotions. Thus, it is commonly used in both weddings and burials in Chinese tradition. Nowadays, it appears in maestoso or heroic topics in contemporary works more often. Also, Suona's expressiveness is reflected in its reproduction ability. It can mimic real-world sound with highly flexible performances, such as birds sing, monkey cry, and frog croak, and these are all included in our virtual instrument.

When samples were recorded, 5 different microphones were used with different positions to capture the spatial and reverb characteristics of Suona. All these channels were mixed down to four channels: Yin, Yang and far stereo. The volumes of these four channels were adjustable in software, making it possible to obtain most various tone:

By controlling airflow and finger, Suona has a very rich set of performances such as mordent, finger pole popping, trill, flutter, vibrato, staccato and gliss. All these performances can be triggered in Phoenix Scream software, making it most adjustable Suona virtual instrument:

Phoenix Scream has real-recorded expressions that are freely controllable. With the control of MIDI CC, it can express tone changes like a real Suona performance:

We recorded the sound between legato notes in three speeds, and apply them according to playing speed in software. In addition, we recorded "popping legato" and "flutter legato" that are specific in Chinese Suona:

We summarized and screened 29 techniques of Suona, including traditional performance techniques, film and television soundtracks, and special techniques commonly used in Chinese ancient style songs, just to preserve the natural talent of Suona to the greatest extent:

At the beginning of Chinese Traditional series development, we started to record the convolution reverb samples from spectacular places, famous natural and historical heritages in China. Thus you can simulate Phoenix Scream being played at the Great Wall or Terracotta Army site: