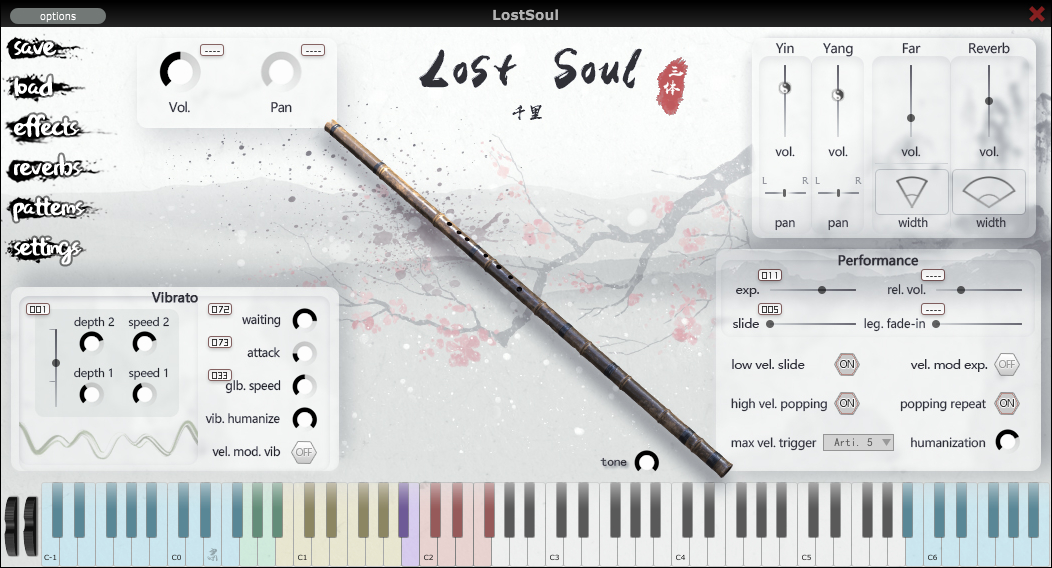 Xiao is a Chinese vertically-played membrane-less wind instrument made of the bamboo trunk. With Xiao's grave and lower sound, it is traditionally presented in aulic or ritual music. In contemporary works, Xiao is commonly used in Chinese-fantastic topics. Though the pieces of Xiao are usually slow and smooth, it is also good at presenting fierce emotions by airflow-attack and vibrato.

There are three primary variants of Xiao: Dongxiao is what we present in Lost Soul, which is the most commonly used one; Nanxiao, with a deeper sound, appears widely in southern China; compare with the previous two, Qinxiao has a sweeter sound and is specifically used in accompany with Guqin (a plucked 7-string instrument).

When samples were recorded, 5 different microphones were used with different positions to capture the spatial and reverb characteristics of Xiao. All these channels were mixed down to four channels: Yin, Yang and far stereo. The volumes of these four channels were adjustable in software, making it possible to obtain most various tone:

By controlling airflow and finger, Xiao has a very rich set of performances such as attack, mordent, finger pole popping, trill, flutter, vibrato, staccato and gliss. All these performances can be triggered in Lost Soul software, making it most adjustable Xiao virtual instrument:

Lost Soul has real-recorded expressions that are freely controllable. With the control of MIDI CC, it can express tone changes like a real Xiao performance:

We recorded the sound between legato notes in three speeds, and apply them according to playing speed in software. In addition, we recorded "regular legato", "popping legato" and "wuxia style legato" that are specific in Chinese Xiao:

We summarized and screened 8 techniques of Xiao, including traditional performance techniques, film and television soundtracks, and special techniques commonly used in Chinese ancient style songs, just to preserve the natural talent of Xiao to the greatest extent:

At the beginning of Chinese Traditional series development, we started to record the convolution reverb samples from spectacular places, famous natural and historical heritages in China. Thus you can simulate Lost Soul being played at the Great Wall or Terracotta Army site: