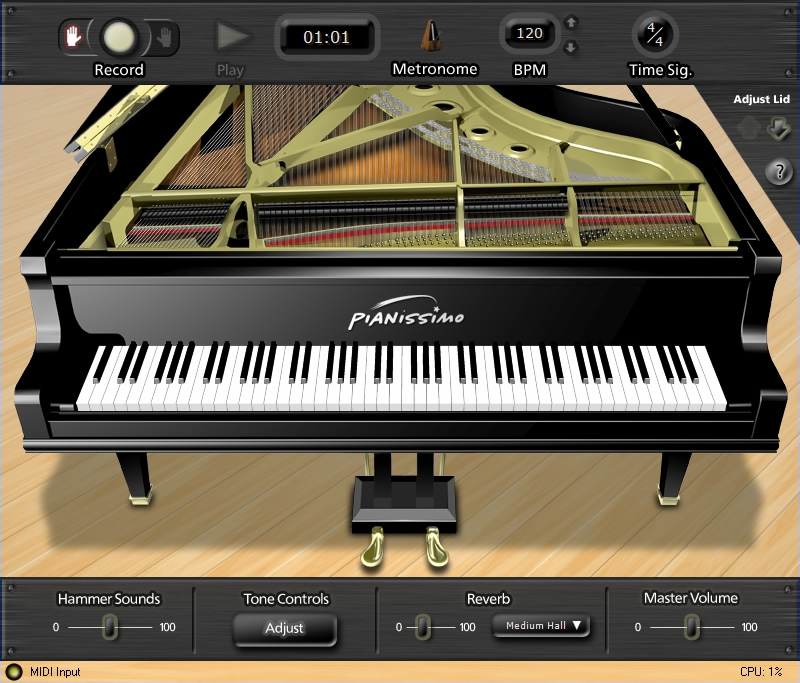 Pianissimo is a Virtual Grand Piano that uses a combination of sample playback and advanced physical modeling to create its acoustic grand piano sound. Starting with 250 MB of high-quality samples of a Steinway Model D grand piano, Pianissimo uses complex signal processing and programming to recreate the warmth, response, and playability of a real grand piano. This warm, natural sound is then paired with a professional studio-quality reverb algorithm to add the depth and ambiance of a real acoustic space. Add to this, modeled sympathetic resonance, incidental mechanical hammer sounds, control over tone and velocity response, 256 voices of polyphony and low CPU usage.

The Stand-Alone version supports any MIDI device, and any Wave, ASIO, or WaveRT device. It allows for two-track recording, loading and saving of standard MIDI Type 1 files, and supports mixing down to WAV, MP3, WMA, and Ogg Vorbis files.

I have purchased Pianissimo over 10 years ago (for the price of $69, it is now listed for $19)
and used it in many projects, no problems whatsoever.
I use Pianissimo in combination with a M-Audio Keystation 88 ES and Renoise on the PC to produce music.

With options for sympathetic resonance modeling, reverbration, (key) hammer sounds, next to a built-in 3-bands equalizer.
Pianissimo has 256 voices of polyphony, enough for 88 keys, does not consume much CPU and is very stable.

Pianissimo is my favourite virtual grand piano. The sound has a very warm, rich character, which can be adjusted to suit your needs.

This VST looks good on the surface but it does have issues!

£70 is a lot for a piano VST plugin that has MAJOR PHASING ISSUES!

THIS SHOULD NOT BE USED DUE TO PHASING ISSUES

Pianissimo
Reviewed By lingyai
May 7th, 2012

N.B. This is a very slighlty revised version of a review I posted on Amazon

Pianissimo sounds superb. It is a tie with TruePianos' Atlantis module for the the best sounding piano for a PC I've played -- this includes a number from respected names like Yamaha, Roland (Edirol), Sampletank, Native Instruments and Soundiron. It sounds incredibly natural and responsive and is relatively light on the CPU. It has a few good preset models, a very good adjustable reverb, other nice settings (velocity control, simluated pedals, sympathetic resonance and piano lid position) and a simple, intuitive interface. The standalone version (included in the box, along with the plug-in version) launches quickly and plays and records MIDI without fuss. If you simply want to play virtual piano, it is a 10/10 product. Lovely, lovely.

I am only giving it a mark of 4, however, due to what I only discovered post-purchase is actually a known bug -- it needs 250 mb of RAM (which in and of itself is not a big problem) which must be contiguous. What this means is that if you use it in a multitrack project where you use enough other virtual instruments, you can run into a problem where Pianissimo, once inserted, can't access enough contiguous RAM, and so won't load properly the next time you open the project.

Here's an example. Recently I created a project where piano was pivotal; I loaded in Pianissimo, then a number of other virtual instruments, so in the end I had worked out an arrangemnent for about 10 virtual instruments in all. I saved and closed it, and all was ok. When I reopened it, however, Pianissmo would not load -- an error message said to either reinstall the program or contact tech supoort. I did the latter. I was told to be sure Pianissimo was the first instrument loaded in the project. Well, I'd already done that; but anyway, I started the project again, loading it first again. I then added the other instruments, recreated the project, saved and closed it -- and the same problem occurred the next time I re-opened.

Turns out tech support had failed to share with me an important piece of information (which was actually tucked away on the company's own website; shame on me for not scouring it closely enough; shame on them for not mentioning it to me, and not making it more conspicuous to begin with) -- namely, that in such cases, Pianissimo needs to be the first instrument loaded EVERY TIME the project opens. The only way to do this is to open the last saved version, remove all other instruments, load in Pianissimo, then reload the other instruments, and then reapply any FX and routing configuration you've used. Every time! Even though my total RAM usage was only around 75%.

This should not happen -- I've been able to use other instruments when RAM usage was close to 95%. (I am using a Windows 7, 32 but Dell Vostro laptop, 4 GB RAM, Intel i5 2.52 ghz CPU.) Effectively having to recontruct the instrument structure and configuration from scratch every time I reopen a moderately complex project is a huge hassle and time drain. It also reveals inexcusably buggy software design. I have around 40 virtual instruments, some of which predate Pianissimo by a few years, and Pianissimo is the only one with this flaw.

So, if you want a virtual piano for projects which will include other RAM-using virtual instruments, to be on the safe side, look elsewhere, unless you are certain in advance that their RAM demands will be quite small, or unless you like setting up your projects over and over again.