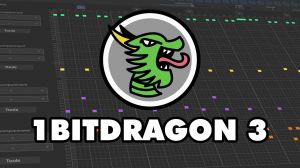 1BITDRAGON has announced that 1BITDRAGON 3 has been released for Windows, MacOS, and Linux.

1bitdragonSequencer
by 1BITDRAGON   $20.00
Add A Review My KVR

Recently purchased this on itch.io. It runs great on my Lubuntu Linux box and 1BD is just a lot of fun. The interface is easy to learn and provides up to 4 instrument slots and 5 slots for drums. The author has included a fairly large number of good quality sound samples, reminiscent of the GM soundfont instruments. It does not host vst/vst3 instruments. 1BD can export .wav files and .mid format. I've been using 1BD to flesh out some simple compositions, export to MIDI and then import to Renoise for use with my U-he Zebra2 and ZebraHZ vst3 instruments. I think it was a $20 well spent just for the casual fun I have with it. Cheers.