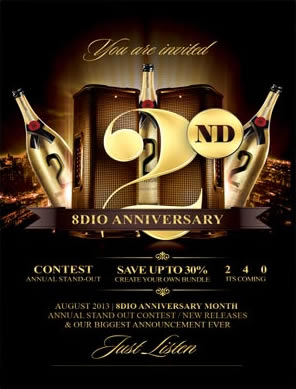 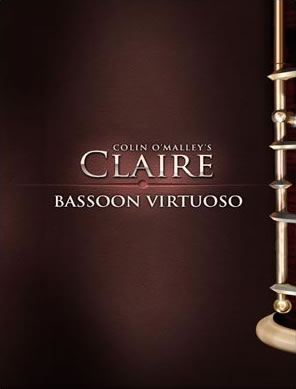 8Dio is celebrating its 2nd Anniversary and invites you to celebrate with them during the month of August. They say there are a few big surprises coming, including their annual "Stand Out" contest, unique gifts and discounts and the company's "biggest announcement till date".

8Dio "Stand Out" Contest
The 8Dio "Stand Out" Contest is a competition seeking to showcase the exemplary and innovative musical talents of composer, producers, songwriters and sound designers from all over the world. All you have to do to enter is compose an original piece (highlighting at least one of the 8Dio instruments) of music, of no longer than 3 minutes in length. 8Dio say they have some great prizes lined up, so get those creative juices ?owing. How much creativity can you pack into 3 minutes? Keep an eye out on 8Dio's Facebook and Twitter for the contest details.

The Bassoon Virtuoso is described as expressive, playable and lifelike. It was recorded in a symphonic hall and contains three microphone positions (Close, Decca, Far). The core of the Bassoon is its highly advanced legato system, which contains both slow and fast legato. The legato system allows you to play legato with passionate arcs, sustains, staccatissimo, expressive marcatos, etc. The arcs were recorded with both non-vibrato, medium and strong vibrato, so you can freely sculpt your performance from the subtle to vibrant. In addition, the Basson features trills, runs, staccatissimo and even non-tonal effects like breaths, valve sounds and natural click noises, etc.

The Bassoon Virtuoso requires the full retail version of Kontakt 4.2 or later. The instrument is currently available for the introductory price of $99 and goes to $139 on September 1st, 2013.

Check out www.8dio.com for more information, demos, videos and offers.

Can we get a like button here?by donkey tugger @ 7:17 in Site Stuff

The quoted out of context threadby Tj Shredder @ 7:11 in Off Topic ClassicsFS: Valhalla Room $40by Oscarfishermusic @ 7:09 in Sell & Buy (+Special Offers, Deals & Promos)