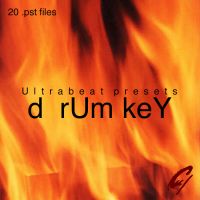 9 Soundware has released Drum Key version 2, a collection of presets for the Ultrabeat drum synthesizer within Apple Logic Pro.

Drawing entirely on the synthesis component of Ultrabeat (incorporating no audio samples), the sound set is designed to re-purpose the plug-in as a generator of abstract timbres, while remaining true to its rhythmic spirit. The naturalistically dynamic patches exploit elements such as noise LFOs and velocity modulation to evoke human gestures and randomness. This release is a redesign of an existing product. All registered owners of the previous version will receive free updates.

Each of the 20 patches of Drum Key are based on a single timbre ("Timbre 0") which harnesses the technical resources of Ultrabeat without the bias of drum kit paradigms. All 20 patches contain 25 component patches which mirror identical derivational variation concepts and key maps. Echoing the General MIDI Percussion Key Map, variations of Timbre 0 are shaped and arranged accordingly between C1 and C#2 (drum voices 1-16) to its aural or conceptual attributes, allowing simplified reorientation of drum kit sequences. Drum voices 17 (E2) and higher house transpositions of Timbre 0 to sonic expressions of their respective names. In summary, the Ultrabeat architecture, consisting of 25 modules per plug-in instance, allows for 500 discrete timbres in the 20 patches which form the sound set.

Drum Key is not a conventional percussion sound set. While it includes some patches that are intended to mimic drum timbres (notably kicks, snares, and hi-hats), the focus of Drum Key is the exploration of the synthesis capabilities of Ultrabeat beyond applications for which it was designed. Examples include settings which produce bursts of complex rhythms through the use of multiple tempo locked LFOs (Note: All patches were programmed at 120 BPM, and therefore use in some tempo ranges may yield unintended results due to the release time of the amp envelope.), morphing timbres based on the heavy modulation of parameters in the FM synthesis engine, patches which incorporate randomization through non key-synced noise LFOs, and sustaining textures suited for use as backdrops.

Atypical loudness is a quality present throughout Drum Key. Many of its patches will cause the Channel Strip meter to be pegged to 0dB, as the sound set was designed with headroom clipping taken into account to maximize loudness, and in some cases for the deliberate use of digital distortion effects.

Logic ProSequencer / Multitrack
by Apple  $199.99
Add A Review My KVR