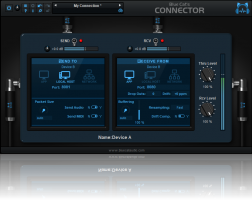 Blue Cat Audio has released an update for Blue Cat's Connector, its universal connection plug-in that can be used to route audio and MIDI almost anywhere "in the box".

This free update adds a new MIDI meter to monitor MIDI activity on the send and receive channels. It also adds a free Windows ASIO driver, to use any audio application as an audio server for Connector, offering seamless integration, like it was already the case with Blue Cat Audio applications. The new version also includes a couple of important fixes (details below). This is a recommended update.

A special re-introduction offer applies to the plug-in until June 10th (details below), and existing customers will receive a special offer by email.

More information about this new plug-in, demo versions and videos can be found on www.bluecataudio.com

Find Connector in the KVR Marketplace