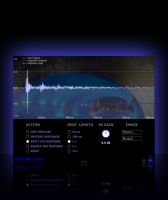 Impulses is a plug-in that captures the acoustic characteristics of a place then applies them to any sound, by using impulse responses (IRs). For example the reverberation of a room can be captured, and later applied to a voice or a music instrument.

The Impulses plug-in can also be used to capture for example the response of a guitar amplifier and a microphone, and later to apply the result to a direct guitar track.