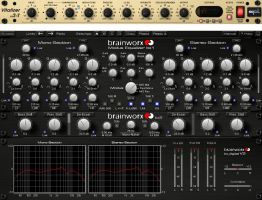 The SPL Vitalizer MK2-T is an authentic emulation of the popular tube-based Vitalizer hardware unit, a longtime staple of top mixing and post-production engineers. Offering a patented technology for greater perceived loudness and clarity without unnatural artifacts, the Vitalizer provides independent Bass and Mid-Hi processing that works in both the time and frequency domains to effectively unmask overlapping sounds. As both a fixative and an enhancement tool, the Vitalizer MK2-T is a mixing must-have.

These new UAD-2 Powered Plug-Ins are noteworthy both in their unique sonic capabilities, as well as their being developed in their entirety for the UAD-2 platform by the software engineers at SPL and Brainworx as part of a new UAD-2 SDK (software development kit).

"With the opening of the UAD-2 Powered Plug-Ins platform to select Direct Developers, we wanted to start with partners that would deliver exceptional results. That meant turning to our friends at SPL and Brainworx," commented Matt Ward, president of Universal Audio. "The SPL Vitalizer and the Brainworx bx_digital V2 have already proven themselves as standout mixing tools on Mac and PC. Now they are available to UAD-2 DSP Accelerator owners, offering a way to offload processing power for running more tracks and virtual instruments on the host computer."

"We're extremely pleased to see the new UAD software version being released and featuring our first SPL & BX plugins for the UAD-2 community," says Dirk Ulrich, CEO of Brainworx and Head of SPL Software. "We've spent the last nine months developing the SDK with UA, and it´s been a lot of work and a lot of fun at the same time. Now it´s time for UAD-2 users to rock the new SPL& BX tools UA is offering them with the new release. Enjoy."

The Brainworx bx_digital V2 EQ and SPL Vitalizer MK2-T plug-ins will be available as part of the new UAD Software v5.9.0 release, slated for Q2 2011. In addition to the Brainworx and SPL plug-ins, v5.9.0 includes the Lexicon 224 Digital Reverb emulation, as well as improvements for UAD-2 Satellite users.