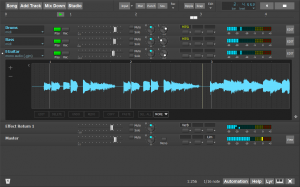 Bremmers Audio Design has released version 7.2 of MultitrackStudio, which works with Windows 8 tablets.

Touchscreen support - introduced in 2009 - has been enhanced and modernized, and the user interface can now scale down to fit the 10 inch Windows 8 tablets various manufacturers have announced comfortably.

The new release comes with improvements for users having large or multiple screens as well. There can now optionally be multiple columns of tracks instead of just one, so more tracks can be displayed simultaneously.

Among the other new features are gapless cycling and a lyrics prompter.

The new version is available free of charge for users who purchased the program after February 1, 2011. Older versions can be upgraded for $39 (Pro Plus) / $23 (Professional).