Celemony Software has announced the availability of Melodyne editor Version 2. New features include extended timing tools, wide-ranging functions for working with scales, plus Rewire, keyboard shortcuts in the plug-in, and numerous other improvements. 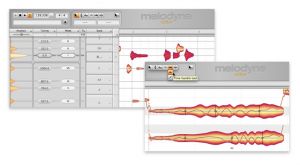 The most important new functions are:

With the update to Version 2, Melodyne assistant and essential profit from minor improvements and ReWire support, these updates are free of charge.

With a new trial version, Melodyne editor can be tested without limitations for 30 days – even if you have already tested an earlier version.