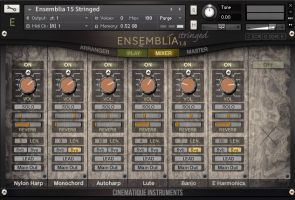 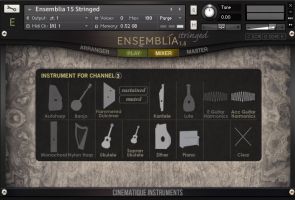 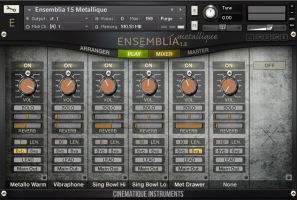 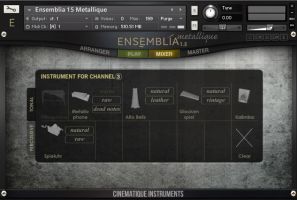 Metallique is focused on metallic mallets such as vibraphone, glockenspiel, metallophone or kalimba, Asian sound sources such as singin bowls and tingshas and domestic percussive sounds such as a wok, a salad or a drawer.

Generally, Ensemblia libraries are designed to allow a user to create beautiful polyphonic arrangements and textures while just playing chords or single notes. Ensemblia can layer up to 7 instruments at the same time and gives you a quick access to a broad range of timbres and tone colors while playing. A special voicing engine will split notes and chords automatically into separate voices and lets a user individually assign them to each particular instrument.

Both patches are equipped with a voicing engine that lets a user spread certain voices to particular instruments. While playing notes or chords Ensemblia automatically analyzes the playing and splits all incoming notes into 5 voices which are low – midlow – mid – midhigh – high. A user can separately assign these 5 voices to each instrument at their own requirements.

The Arranger is a 16-step ostinato engine that sets the velocity, the voicing and the octave for each step and instrument separately. It plays the flexible pattern using only notes and chords that are held down. As a result a user can get versatile and inspiring musical patterns and riffs playable in all ranges and speed variations. There are no pre-recorded phrases. Optionally a user can play in- or off-sync.

EnsembliaKontakt Instrument
by Cinematique Instruments179.00 €
Add A Review My KVR